On July 2nd I had the pleasure of attending the Japanese Art Festival held at Conway Hall in London. It was a two-day event, but I only attended on the Saturday. 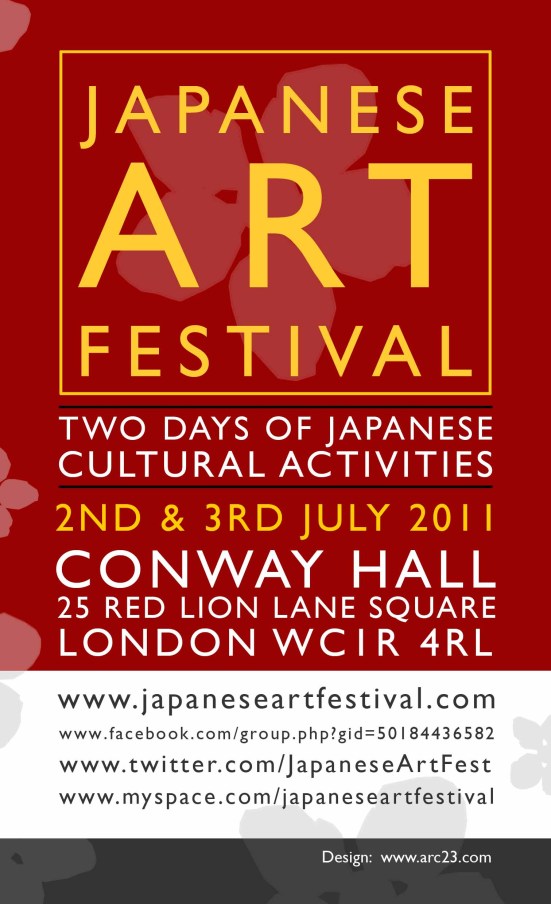 The day was packed with all sorts of entertainment, from traditional music to tea ceremony, cosplay to maid cafes. It was fab! 😀

The whole event was put together by Akemi Solloway. Akemi Solloway is a lecturer of Japanese culture, and has lived in England for the last seventeen years. She is a fascinating woman, and I could have listened to her short lectures all day. She spoke about many different aspects of Japanese culture throughout the day, including traditions such as wearing kimono and tea ceremony. She also gave advice on learning Japanese – she recommended that we watch Ghibli movies! She said that Ghibli movies use polite Japanese, so they’re excellent for studying the language.

The Japanese Art Festival was a charity event to raise money for orphans in Japan, following the disaster of March 11th. Profits were donated to the charity Aid for Japan, which was set up by Akemi Solloway. During the festival a video about the disaster was shown. It was heartbreaking to watch, but good to know that people are staying strong and doing their best to help. By supporting events such as the Japanese Art Festival, we can help too.

There were a lot of wonderful performances during the day. I was happy to see some of the same acts that I saw recently in Brighton, as well some new acts. The schedule changed a little bit from what the website advertised, so I apologise if I’m a little iffy on some of the details.

I don’t know anything about this dance group, but they danced well to Japanese pop songs.

LDN48 are a tribute to AKB48, where LDN stands for “London” (instead of AKB for “Akihabara”). There are a number of members, but seem to split up so they can attend different events at the same time. I saw them in Brighton recently, but in London I saw a different combination of members.

A really excellent violinist. Masa seems able to improvise and collaborate at the drop of a hat!

…but also did lots of collaborations at this event. His collaborations included performances with Hibiki, Zonic, Saara Takase and a lovely girl called Jessica, who sung a song from Spirited Away.

I’ve seen Hibiki perform a couple of times now, and he never disappoints. His playing is just wonderful!

Hibiki performed with Alika Mochida, who is a very versatile singer. In the last few weeks I have heard her sing enka, J-pop, songs from anime and then, at this event, “min’yo” (traditional folk music from Japan).

You know me, I love love love taiko! Kaikyo Taiko play with such enthusiasm and power!

Kaikyo Taiko also did a fantastic collaboration with Hibiki:

And a taiko workshop with members of the audience (oh how I wanted a go!):

Tomoko Kinuta was really interesting. She introduced various different kinds of Japanese flutes. I believe the standard Japanese flute is called a shinobue, and that’s the one featured in this clip:

I especially liked the shakuhachi, which is bigger than a shinobue. This improvised piece about yakisoba was very fun:

Tomoko also showed three very small Japanese flutes, but even Wiki has failed me when I tried to find out the names of these flutes. Here are two of them (the third was too small to capture):

Tomoko also played a longer piece on a Western-style flute, which was just beautiful:

Do you remember in my Brighton Japan Festival post when I said “Teddy and his brother got up to sing a few tunes“? Well it turns out that Teddy Djuma and his brother Michael are known as “Djumans”, and they’ve been putting their act together for a while now. I can’t find any website associated with Djumans – if you’re reading this, please let me know if you have one!

I find Zonic’s music so incredibly catchy that I’ve been humming “The Devil’s Eyes On You” since Saturday. Zonic (Ziggy Newman) makes electronic music, which often incorporates retro game soundtracks. She also writes original songs. On Saturday, she did a collaboration with Masa Futagami, where he played violin over her backing track. Unfortunately the sound quality on the video is not great, but you should be able to get the idea…

Since I first heard Saara at the Brighton Japan Festival I have been hooked on her music, and her personality. She seems like such a lovely, happy person – and she rocks!

Her performances included a number of collaborations with Masa Futagami, on “Home”:

The Japanese Art Festival wasn’t just about music. There was also a cosplay competition:

A video from Japan of Leiji Matsumoto, introducing a new anime film called Space Pirate Captain Harlock, which is due for release in December 2012:

There were maids, beautiful maids from the maid cafe Oh My Lord! They danced, and they wrote my name in chocolate sauce next to a cupcake – what’s not to like?!

Of course, there were also lots of stalls at the Japanese Art Festival. Stalls sold various anime and manga related goods:

As well as T-shirts by Opportuni-T in aid of Japan:

And other various goods:

This last one is Miwary – I adore their fabric tea cups!

There was also a special guest – Momolita – who was displaying her amazing collection of spooky dolls:

I also had my first (and certainly not last) encounter with the British Haiku Society, had a nice chat with a guy from Third Window Films and found out about a charity called Seven Beach Aid (Facebook). Check the links for more information!

The event was really great, and I wish I could have gone back for more on the Sunday! There was supposed to be martial arts, more music and dance, more maids, gothic lolitas and kimonos! Sounds great, doesn’t it?

As usual, you can see all my photos from the day on Flickr and videos on YouTube. I was hit by a whole bunch of technical challenges that day, which is why some of the photos and videos were actually taken on my phone instead of my camera. I also found the lighting in Conway Hall a little challenging – I still have a lot to learn about photography! The videos have a lot of background noise, which I couldn’t do much about. I wish people would shut up and listen to the beautiful music sometimes. 😉

The next charity event organised by Akemi Solloway will be Bunkasai on November 25th, at Old Spitalfield Market, London.