Folks, I have a plan!

Ever since returning to the UK last April, I’ve been listing up the places I want to visit next time I go to Japan. Following the Great East Japan Earthquake and Tsunami in March 2011, I feel drawn to the Tohoku region.

At the time of the disaster I didn’t know much at all about Tohoku. My pin-board map of Japan actually has a noticeable gap around the Tohoku region. This isn’t deliberate – I just never had any reason to go there. But now I do.

Since March 2011, Japan has been struggling to get tourists back into the country. Tohoku was never really a hot tourist spot, but now there is a “Destination Tohoku” campaign encouraging tourists to see what the northeast of Japan has to offer.

Tohoku consists of six prefectures (“ken”): Akita, Aomori, Fukushima, Iwate, Miyagi and Yamagata. I would like to visit them all, but that could take some time. Initially, I plan to start with trip to Sendai, the capital of Miyagi prefecture, and Shichigahama, also in Miyagi.

Sendai is famous for its Tanabata Festival, the largest in Japan, which takes place in August. I’d love to see it with my own eyes and even participate.

Shichigahama may seem like an unusual choice for a tourist destination but, having become involved with the charity Seven Beach Aid, I feel I really ought to visit the town which the charity focusses on (“Shichigahama” means “seven beaches”). 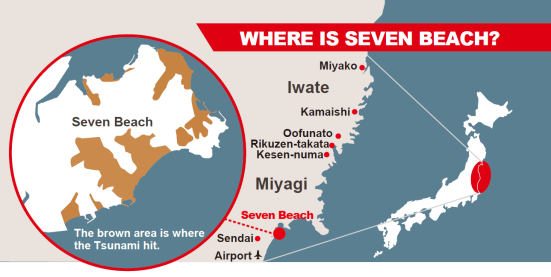 Another place I’d be interested in visiting in Tohoku is the new World Heritage Site, Hiraizumi, in Iwate prefecture.

Hiraizumi is home to Konjiki-do (Golden Hall) within Chusonji Temple, which attempts to recreate an ideal Buddhist world in this world, and Motsuji Temple, famous for its Jodo (Pure Land) garden grounds. As such, it is host to an ensemble of exquisite “culture of gold” remnants from the brand of Buddhism that developed independently in the Tohoku region far away from the cultural center of Kyoto in the late Heian era of the 11th century. UNESCO has recognized this area as being a globally rare example of local culture to manifest on such a high level in the transitional period from the ancient era to the medieval period. (JNTO)

My plan to visit Tohoku involves tourism, of course, but also research. The next time I visit Japan, I want it to be as a freelance writer, not just as a holidaymaker. I plan to meet the local people, eat the regional food, find out why Tohoku should be on everyone’s list of places to visit… and write, write write! Ideally, following my trip, I will not only write here on Haikugirl’s Japan, but also write some pieces for other publications. I will, of course, be taking a lot of photos while I’m there too.

I’m not sure yet when this trip will take place. I’d like to aim for next year, but the one thing holding me back at the moment is money. Although it’s not expensive to visit Japan, it does cost more than I currently have in my piggy bank. That is why Haikugirl’s Japan is now accepting donations. If you would like to see this trip come to fruition, and read the resulting reports and articles, please consider helping me reach my goal.

While I am, of course, hoping some kind stranger stops by and donates their lottery winnings to me, I don’t really expect that to happen. In reality, I’m not expecting people to just whip out their credit cards and give me their money. Why should they? But one thing I’ve learnt in this life is that if you don’t ask, you don’t get. So I’m asking. Click here for more information.

Donations or no donations, I will go to Tohoku. I can’t say when it will be though, so you’ll just have to keep watching this space. Why not subscribe by email (see the little widget in the upper right there?) to make sure you never miss out on Haikugirl’s Japan? よろしくおねがいします！(^_^)v

6 thoughts on “The Tohoku Plan”