Last week’s post was about Shisa (シーサー), so this week I need to start with あ(a), which confused a lot of you playing along! Shisa is written シーサー in katakana, but that’s しいさあin hiragana (or shiisaa in romaji), so you have to count the extra あ at the end. A big thank you to everyone who joined in this week with words beginning with あ (and to those who joined in even if you got it wrong!) – ZoomingJapan with Aizu (会津) in Fukushima Prefecture, akabeko (赤べこ / red cow of Aizu), and  Amanohashidate (天橋立) in Kyoto Prefecture, JayDee with Ainu (アイヌ), sequinsandcherryblossom with Anpanman (アンパンマン) – ooh, ends with ん – and Akihiro with anko (あんこ / my favourite red bean paste), Amagigoe (天城越え / あまぎごえ), which is a famous enka song by Sayuri Ishikawa, and Ako Roshi (赤穂浪士 / あこうろうし, which is the film 47 Ronin. We’re so close to the end of the game now that I have to be really careful about what word I choose to make sure the game will be able to continue next week. So, in the end, I chose to write about… 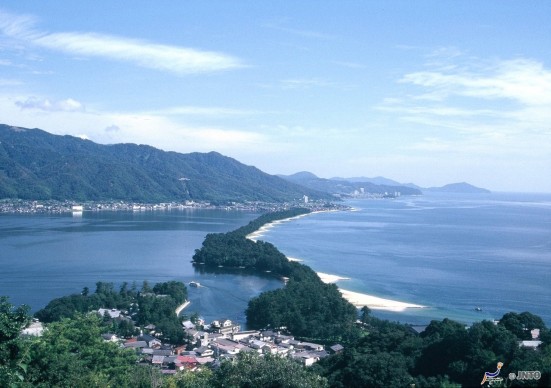 Amanohashidate is one of the ‘Three Views of Japan‘ (日本三景 / Nihon Sankei), the other two being the pine-clad islands of Matsushima and the torii at Itsukushima Shrine on the island of Itsukushima, popularly known as Miyajima. The name ‘Amanohashidate’ means ‘Bridge to Heaven’.

I’ve never been to Amanohashidate, but doesn’t it look spectacular? The sandbar (the ‘bridge’), which is 3.3 km long and covered with about 7,000 pine trees,  is a thin strip of land connecting the two sides of Miyazu Bay in northern Kyoto Prefecture. It forms part of the Tango-Amanohashidate-Oeyama Quasi-National Park, and you can actually walk all the way along it.

Amanohashidate Station (marked on the map above) is on the Miyazu Line railway, and is about two hours from Kyoto Station or Osaka Station. The actual town of Amanohashidate is split into two parts – one at each end of the sandbar. The station is at the southern end, along with a number of hotels, ryokan (Japanese inns), restaurants and a temple.

From the southern end of the ‘bridge; you can take a chairlift or a monorail (below) up to Amanohashidate View Land, which is an observatory at the top of Mount Monju. From there, you can see the view of the whole sandbar, which must be beautiful. 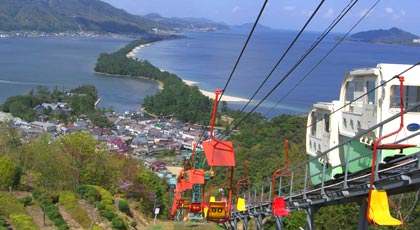 At the northern end you can also view the sandbar at Kasamatsu-koen. According to my Lonely Planet Japan guidebook, “You are supposed to view Amanohashidate by turning your back to it, bending over and observing it framed between your legs! (It supposedly makes Amanohashidate look like it is ‘floating’.)“.

Other than the view itself, there doesn’t seem to be an awful lot else to do in Amanohashidate, but there is a popular temple called Chion-ji at the southern end and another called Nara-ji at the northern end. Chion-ji is supposed to be a good place to visit if you wish to achieve something academic (like passing a test), and Nara-ji is good for making your wishes come true.

Amanohashidate looks like exactly the kind of place I would love to have a day trip or overnight trip to, as I love places where I can see an impressive view and wander around temples. Reading about Amanohashidate and seeing these pictures is making my feet very itchy indeed!

Amanohashidate (あまのはしだて) ends with て(te), so next week I will be looking for a noun beginning with “te”. If you have any suggestions, please leave them below and I’ll give you a mention next week. It’s getting tougher now as the year comes to an end (only 6 weeks to go!), so I really appreciate your ideas and input! But don’t forget, no words ending in ん! (^_^)v