Last week’s post was about kokeshi (こけし), so this week I need to start with し (shi). A big thank you to everyone who joined in this week, although unfortunately there were no suggestions I could use this time (it’s getting hard now after 50 weeks!). ‘Shi’ has been popular this year and I’ve already written about: shiritori, Shikoku, Shibuya, Shizuoka, Shinjuku, and Shisa. But, I racked my brains and in the end I decided to write about…

Shimane Prefecture (島根県 / Shimane-ken) is located in the Chugoku region of Japan, as you can see on the map below. 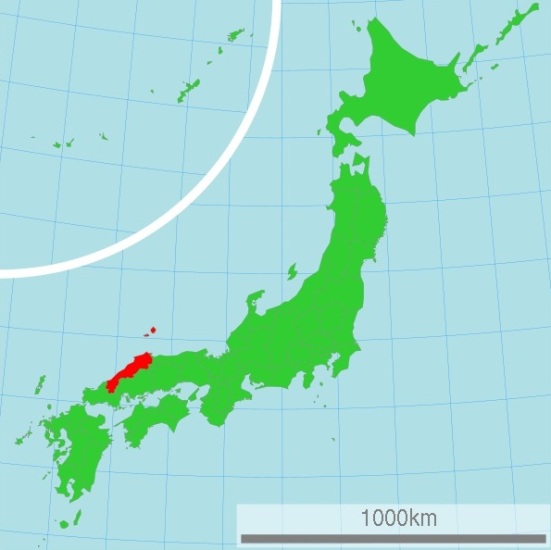 I’ve never been to Shimane, but I’m always interested to learn about different areas of Japan, so I’ve been reading about what there is to do in Shimane. The capital is Matsue (松江), which looks like a good place to visit if you like castles, shrines and Japanese history. Matsue sits between Lake Shinji and Nakaumi and is sometimes called the “water city” (水の都).

One of the most famous attractions in Matsue is the shrine complex Izumo Taisha, which is recognized as one of the oldest Shinto shrines in Japan and is ranked second in importance only to Ise Grand Shrine in Mie Prefecture. Izumo Taisha is dedicated to the god Okuni-nushi and was built for him in return for him giving up the land to the Yamato rulers. The shrine complex is vast and contains many halls and shrines. The main shrine is in the Taisha-zukuri style, which is the oldest kind of shrine architecture in Japan. On either side of the main shrine are long wooden buildings which are said to house the gods when they gather during the 10th month of the lunar calendar to discuss the fortunes of the people for the coming year. Just across from the main shrine is the Kagura-den, which has the largest and heaviest shimenawa rope in Japan hanging over its entrance. It is said that if you throw a coin up and it gets stuck in the rope, you will be blessed with good fortune.

Having been to Ise a number of times before, I’m sure Izumo Taisha would also be worth a visit.

Shimane looks like a place which is steeped in history, and an excellent place to experience some of that history would be Matsue Castle. Matsue Castle is a feudal castle, and its nickname is the ‘black castle’ or ‘plover castle’. It was built in 1611 and abandoned in 1871. Most of the castle buildings were torn down in 1875, but in 1955 restoration began. (Source: Japanese Castle Explorer). 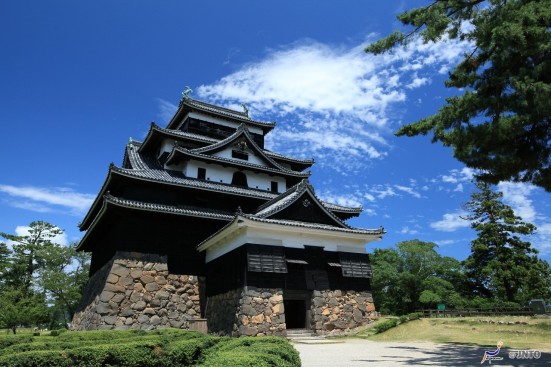 If you happen to find yourself in Shimane, you’ll find there’s a lot more to do than just visit castles and shrines (if you’re looking for more than that). The Adachi Museum of Art (足立美術館), which has a large collection of works by the Japanese artist Taikan Yokoyama (横山 大観), looks interesting. The museum’s main draw is its stunning Japanese garden, which would be a beautiful place to visit in any season. 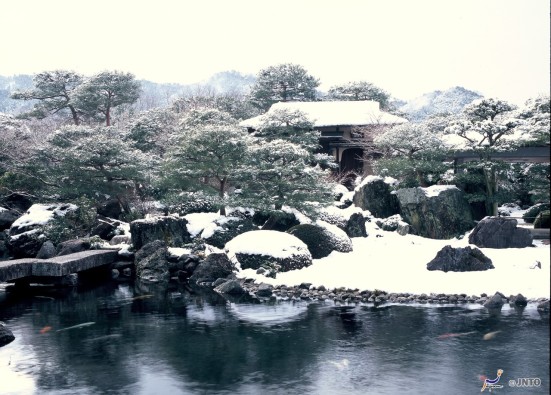 Shimane is also home to the Iwami Ginzan Silver Mine (石見銀山), which was the largest silver mine in Japanese history and was added to the World Heritage List in 2007. Japan used to produce a third of the world’s silver, and most of this was mined by the 200,000 miners at Iwami Ginzan. Silver from Iwami was exported overseas, and it played a large role in supporting trade between Europe and Asia. The area is now popular with tourists, featuring shops, museums, shrines and temples.

Shimane’s tourism website, Visit Shimane, is an excellent source of information in English if you’re planning to visit. There is also some information on the JNTO website and on Sightseeing Navigation in Shimane.

Shimane (しまね) ends with ね (ne), so next week I will be looking for a noun beginning with “ne”. Please join in with your suggestions and I’ll give you a mention next week. This is your last chance to participate, as next week will be the last in the series of Weekly Shiritori! I really appreciate all the ideas and input you’ve shared all year, but don’t forget, no words ending in ん! (^_^)v

Also, as the year is coming to an end, I’m starting to think about next year’s weekly series. I want to try something new, so if you have any ideas or suggestions, please leave a comment below! 😀