At the beginning of April I was lying in bed one night browsing Facebook, when I spotted an announcement from Chiki Tea asking for tea tasters. 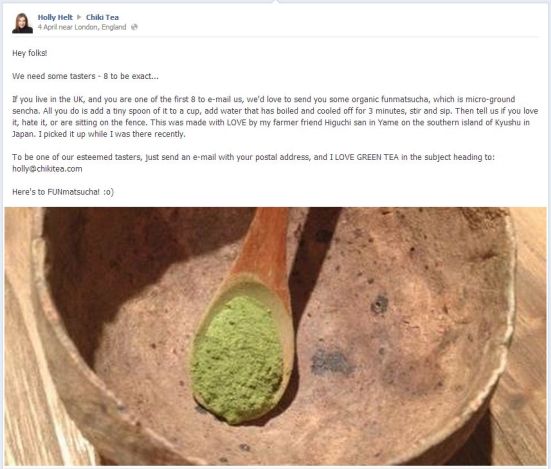 Moments later I had managed to sign myself up to taste some funmatsucha (粉末茶). Not to be confused with matcha (抹茶), funmatsucha is actually micro-ground sencha (煎茶) (that’s ‘ordinary’ green tea to most folks).

My tea arrived really quickly, and was beautifully packaged, complete with an origami paper crane, which was a nice touch.

Unfortunately, because of moving house and everything I just haven’t had time to sit down and enjoy a nice cup for tea all month, but today I finally stopped and made the time for a brew. The tea is easy to make – you just take one level spoon of the powder and mix it with slightly cooled boiled water (the water should have cooled for about 3 minutes).

Chiki Tea say about the funmatsucha: “This was made with LOVE by my farmer friend Higuchi san in Yame on the southern island of Kyushu in Japan. I picked it up while I was there recently.” Chiki Tea have recently finished a research trip in Japan, and I believe they’re off to Kyushu again soon to spend a year living in rural Japan, right in the heart of the tea fields. They will be publishing a book at some point in the (hopefully) near future – GREEN IS THE NEW BLACK – the glorious rise of Japanese green tea – which I’m very excited about!

The tea was delicious. Very light and refreshing, with the unmistakable taste and scent of sencha, but an appearance a bit more like matcha. Matcha can be very bitter, but sencha has a sweeter taste, and this funmatsucha was very easy to drink.

Chiki Tea’s aim is to ‘introduce the magical world of Japanese tea’, and they’ve certainly done a good job so far. I had not heard of funmatsucha before, but now I think I’m a bit of a fan! If you want to know more about funmatsucha, I found this great article on My Japanese Green Tea which explains everything.

Find out more about Chiki Tea on their Facebook page:  facebook.com/ChikiTeaTime 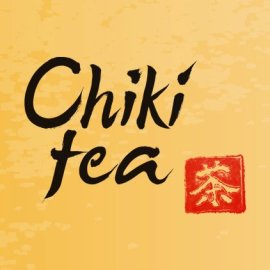 2 thoughts on “Funmatsucha from Chiki Tea”