There were some great suggestions this week, and a lot of them seemed to relate to one theme. So this week I have decided to write about…

‘Yu’ (湯) or ‘oyu’ (お湯) (to be polite), simply means ‘hot water’. However, this simple word has become the symbol for Japanese onsen (温泉), or hot spring baths. 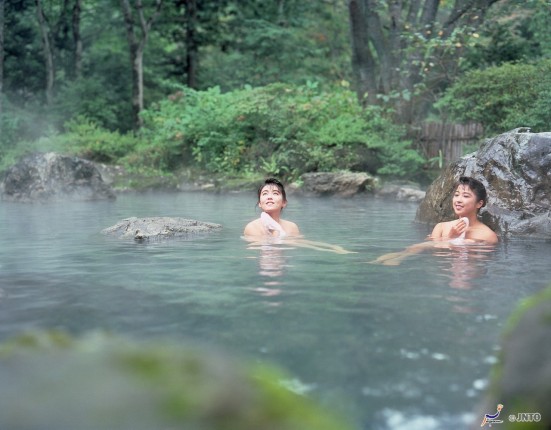 Often this symbol is used on maps and signs to indicate an onsen:

But as well as this symbol, the kanji for ‘yu’: 湯 and even the hiragana: ゆ are also used.

Onsen are such a massive part of Japanese culture, but it’s not until recently that I’ve really begun to appreciate them and understand their popularity. I never really gave onsen a chance whilst living in Japan, because I didn’t like the idea of getting naked in public (I know, I’m so British!), In my whole three years there I only ever tried a private public onsen once (and never a public public onsen!), and I didn’t really get it. I spent all this time getting clean, only to sit in the hot water for a few minutes and promptly get bored. I love baths at home, but they’re full of bubbles and I always take a book in – I just couldn’t think what to do without a book!

But I’m told half of the enjoyment comes from soaking in the onsen with friends. I think it’s still going to be a long time before I’m up for that, but I’m not saying I won’t ever try it. Next, I’m keen to try staying in a hot spring town and having my own private rotenburo (露天風呂 / outdoor bath) attached to my room. Something like this maybe: 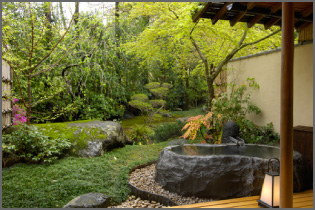 There are thousands of onsen towns in Japan. Some if them, such as Yudanaka (湯田中) in Nagano Prefecture, Yufuin (湯布院) in Kyushu, and Yumoto Onsen (湯本温泉) near Nikko, were mentioned in the suggestions this week. You’ll notice that all of these towns begin with ‘yu’ and the kanji 湯, showing how famous they are for their hot springs. Not all onsen towns have ‘yu’ in their names though. Some other famous onsen towns include Kinosaki (城崎) in Hyogo Prefecture, Gero (下呂) which is between Nagoya and Takayama, Kusatsu (草津) in Gunma Prefecture, Minakami (みなかみ or 水上) in Gunma Prefecture, Hakone (箱根) in Kanagawa prefecture, and Beppu (別府) in Oita Prefecture.

Yudanaka is perhaps one of the most famous hot spring towns, but it’s famous not just as a place for people to go and bathe in onsen… it’s famous for its monkeys! 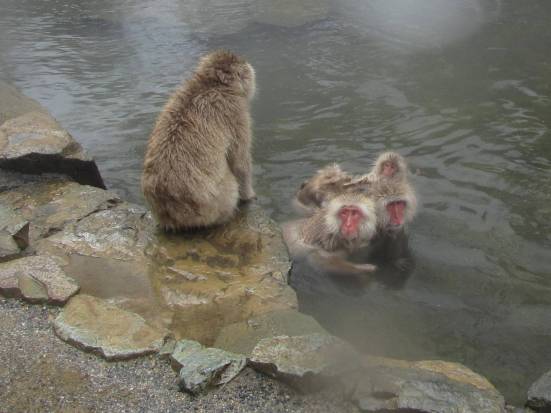 As I’m sure many of you will know, Jigokudani Monkey Park (地獄谷野猿公苑) in Nagano (near Yudanaka) is famous for the gorgeous ‘snow monkeys’ who live there and bathe in the onsen. These onsen are not for public use of course, as monkeys don’t know you have to wash before you get in! The monkeys seem to really love the hot water, and when I visited them they looked so chilled out and happy, like they didn’t have a care in the world.

For many foreign tourists in Japan, visiting an onsen is high on their list of things to do. Just make sure you follow the correct etiquette, clean yourself thoroughly before getting in the bath, and don’t put your towel in the water. Here’s some useful vocabulary if you’re thinking about giving onsen a go:

Also, the changing rooms will often be marked with the kanji for men (男) and women (女), so make sure you learn these and go in the right room!

So what do you think about onsen in Japan? Have you bathed in a public onsen? Would you? Which onsen town in Japan would you recommend? 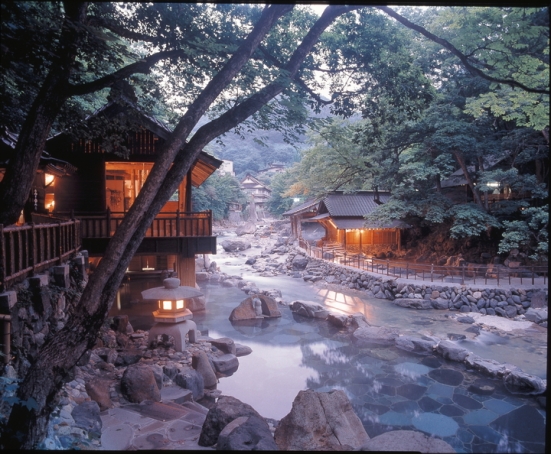 Next week we’ll start with よ (yo), so please leave a comment below suggesting a topic for things beginning with よ. Topics can be anything, as long as they are connected to Japan – food, places, people, characters, whatever you want to hear about! Just remember that the words you suggest must be Japanese words.

I look forward to hearing your suggestions!  (*^_^)v