Those of you in the UK will have no doubt heard of the recent BBC2 TV show ‘The Hairy Bikers Asian Adventure‘. In this series, Si King and Dave Myers (aka the Hairy Bikers) travelled around Asia, riding their motorcycles and cooking as they went. They visited Hong Kong, Thailand, Japan and South Korea, and Japan was lucky enough to have two episodes dedicated to it! The first of the two episodes featured Tokyo, and the second focussed on Kyoto and rural Japan. It was clear from the outset that the Hairy Bikers had always wanted to visit Japan and were absolutely thrilled to be there. They met with locals, learned about real Japanese food, and tried cooking some of their own.

Naturally, there’s a cookbook to accompany the series, and naturally I was keen to try one of the recipes straight away! 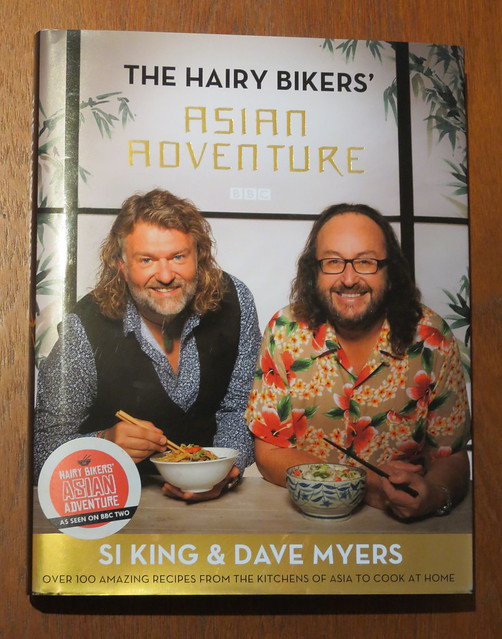 So, this month I have decided to cook a recipe from the ‘Kyoto and Rural Japan’ section of the book. All of the recipes in the book feel quite adventurous, but they’re well written and clearly explained, so I didn’t have any trouble following this recipe. I must say, this is one of the most adventurous things I’ve ever cooked, but I’m thrilled with the final result! It even almost looked like the picture… 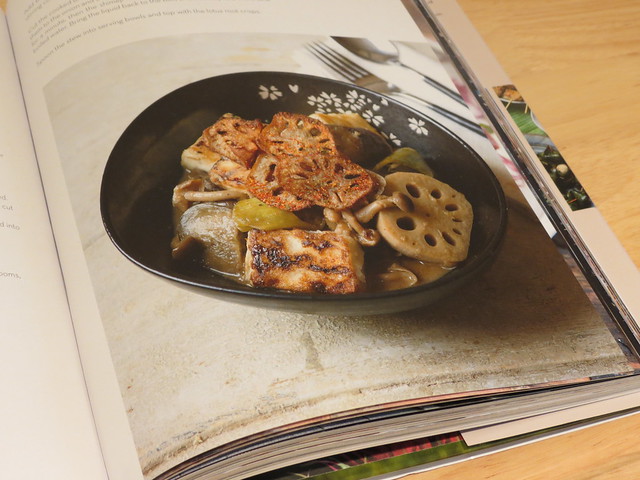 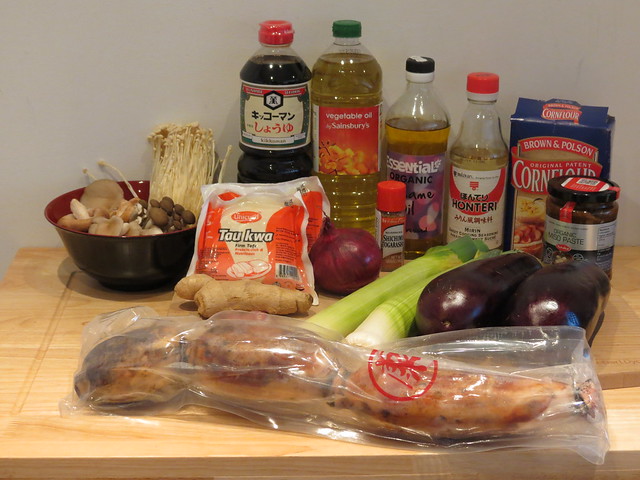 First, prepare the lotus root. I’m glad the book had detailed instructions, because I had no idea what to do with a lotus root! (By the way, I got it from my local Chinese supermarket. It was the only one they had in and was a little bigger than I needed, but I didn’t have much choice. it was pretty expensive at £2.66, and I brought it home not even knowing if I had purchased the right thing! Apparently you can also get canned lotus root, but I couldn’t find any.) So, bring a large pan of water to the boil. Peel the lotus root, cut off a third and set it aside. Add the rest of the lotus root to the pan. Turn the heat down and cook the root for 30 minutes at a very gentle simmer. 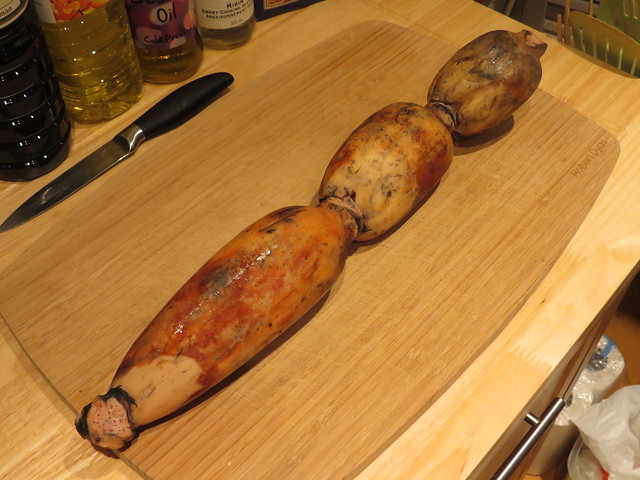 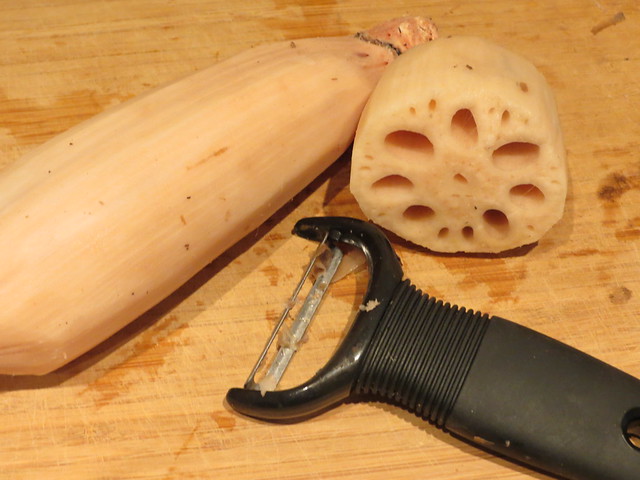 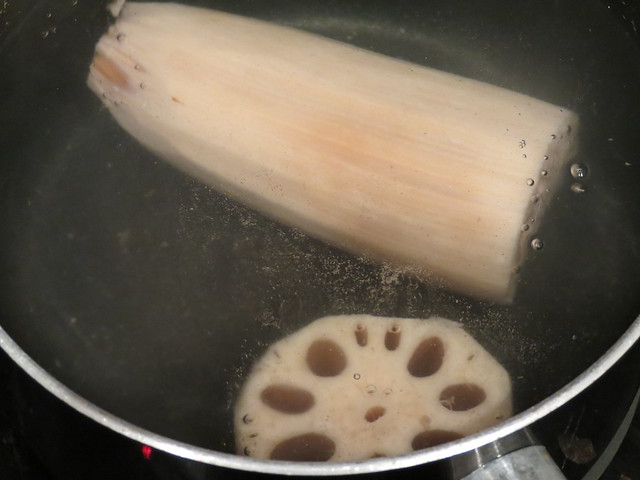 Cut the uncooked piece of lotus root into very thin slices which will be used to make crisps. 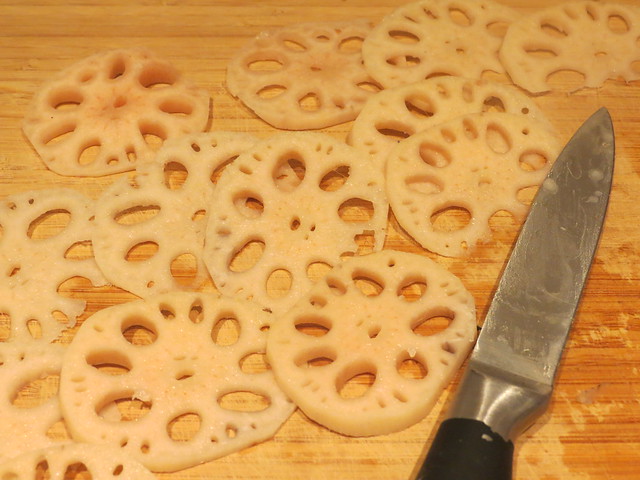 Half fill a saucepan with oil and heat it to about 180 degrees. Fry the lotus roots in a few batches, cooking each batch for about 5 minutes or until golden brown. 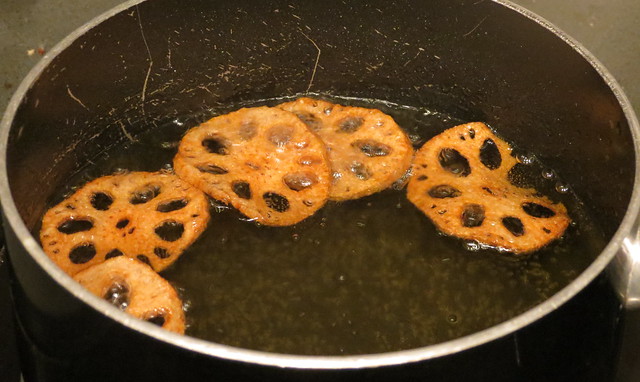 Drain them on kitchen paper and season with shichimi and salt. 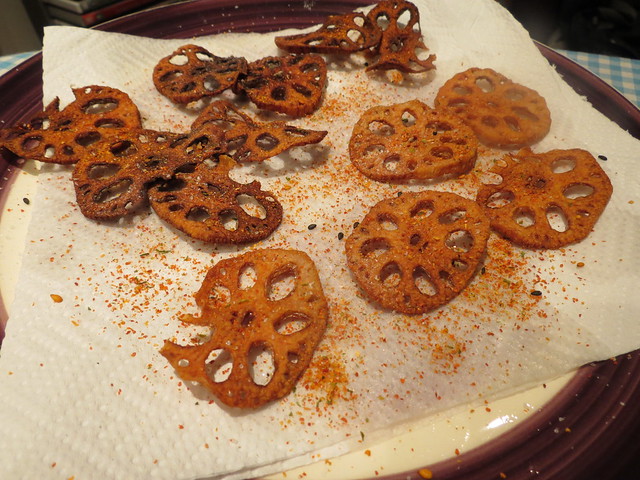 Sprinkle the flour onto a plate and dip the pieces of tofu into it to coat them. 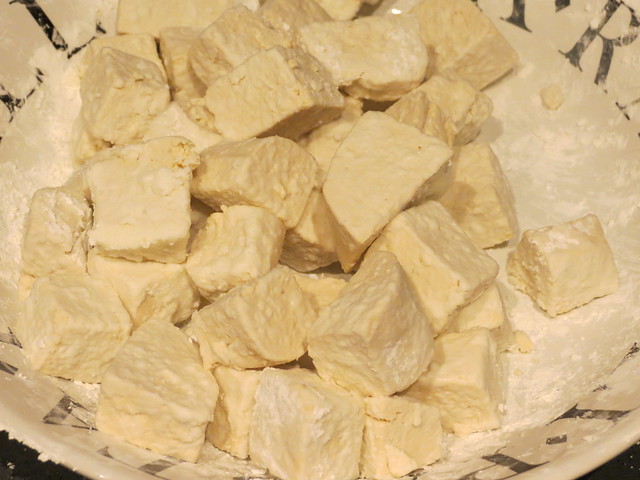 Pour about 5 tablespoons of vegetable oil into a wok and heat, then fry the tofu until lightly golden and slightly crispy and puffy – this will take about 8 minutes. 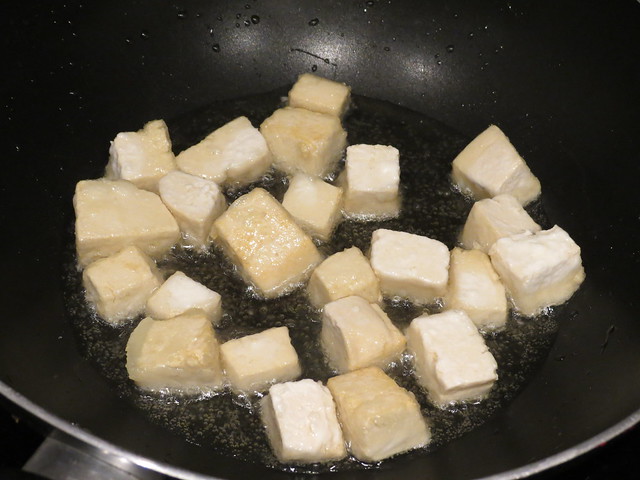 Drain the tofu pieces on kitchen paper (and try not to eat them all whilst cooking everything else!). 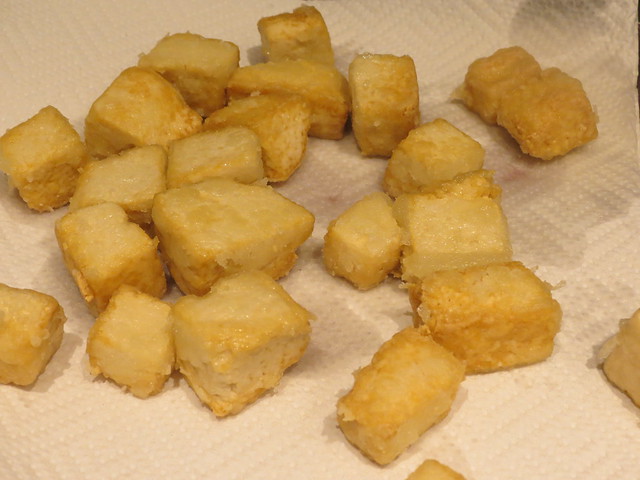 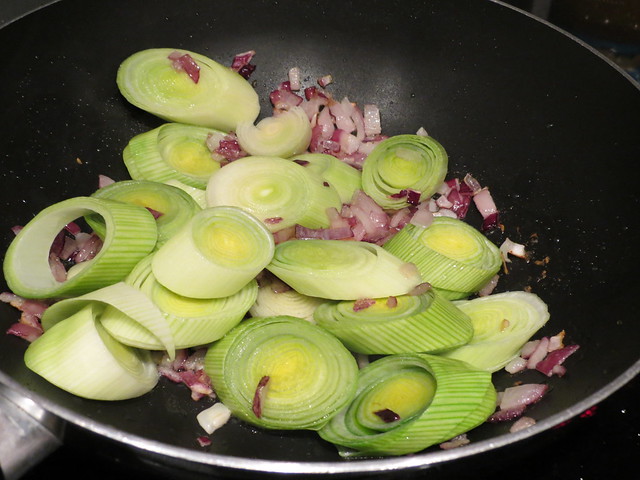 Add the sliced aubergine and cook for a further 6 minutes or until soft. 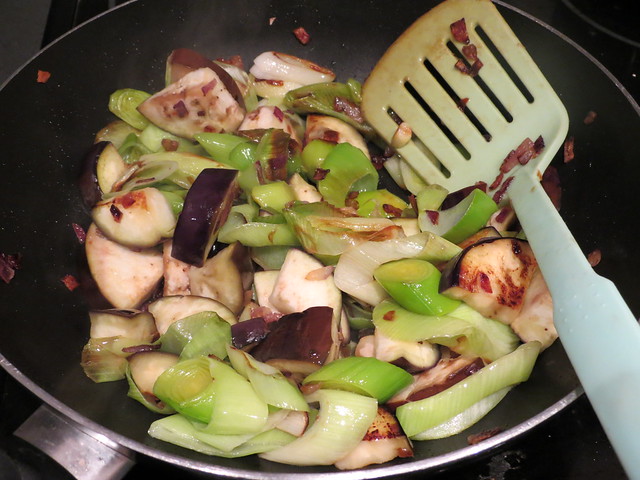 Add the garlic and ginger and fry again for a further couple of minutes. 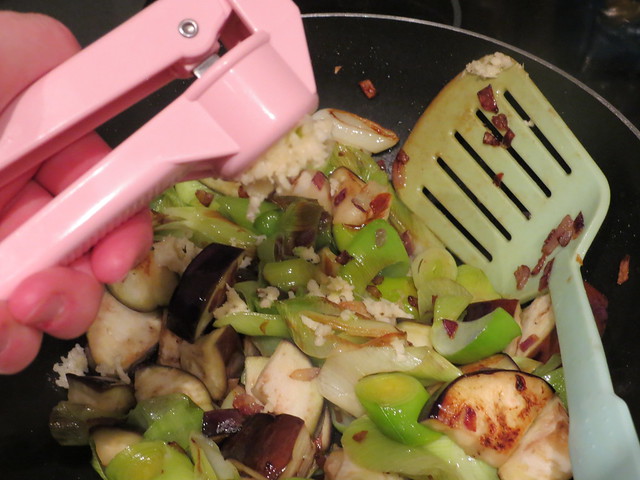 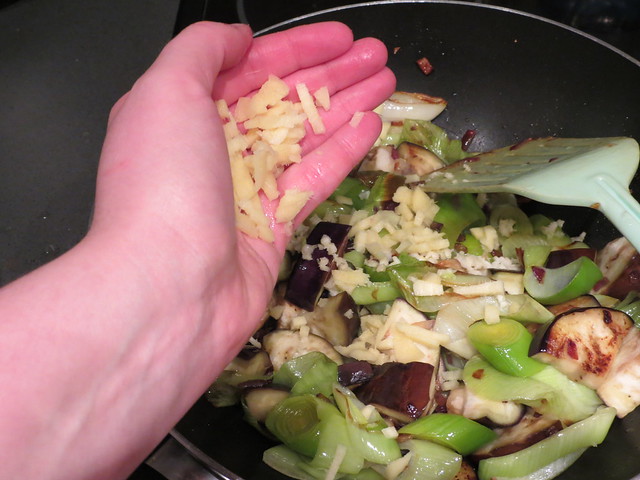 Cut the cooked lotus root into slices of less than 1cm and add them to the mixture. 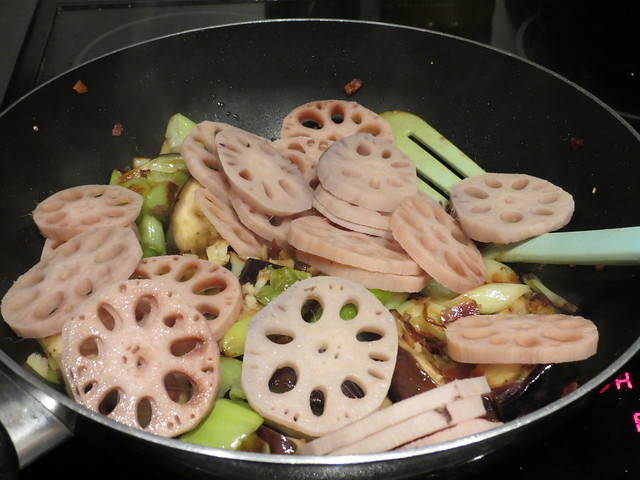 Now add the miso paste and fry for a minute. 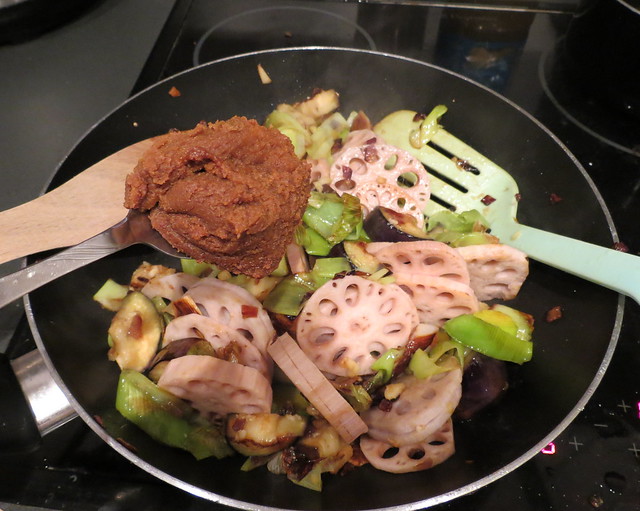 Then add the mushrooms (I couldn’t find many shimeji, so I used a mixture of Japanese mushrooms, including shimeji, enoki and shitake), mirin, soy sauce and water. 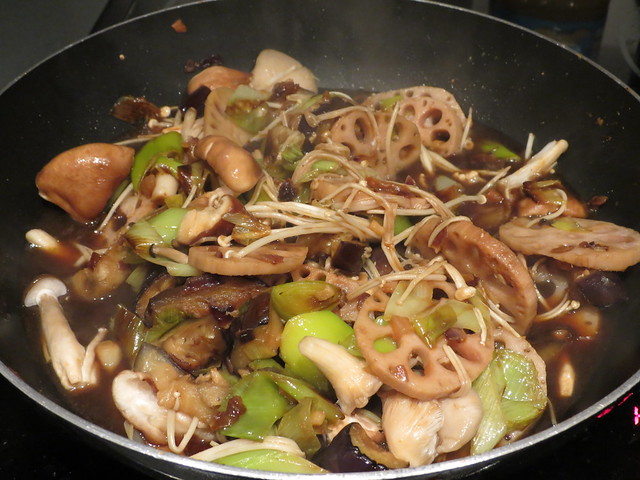 Bring the liquid back to the boil and carefully fold in the tofu. 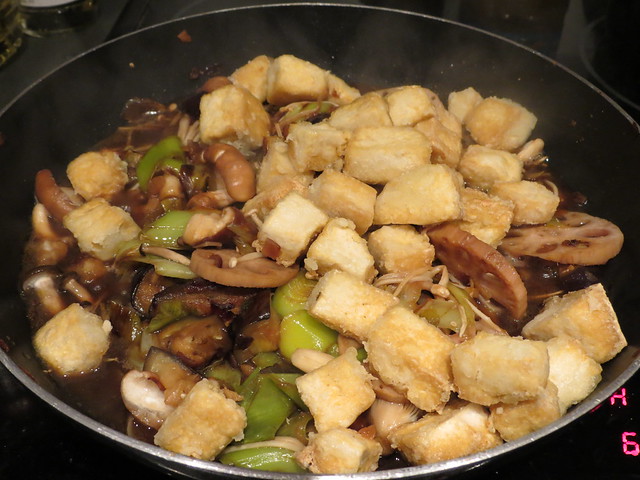 Spoon into a bowl and decorate with the lotus root crisps. 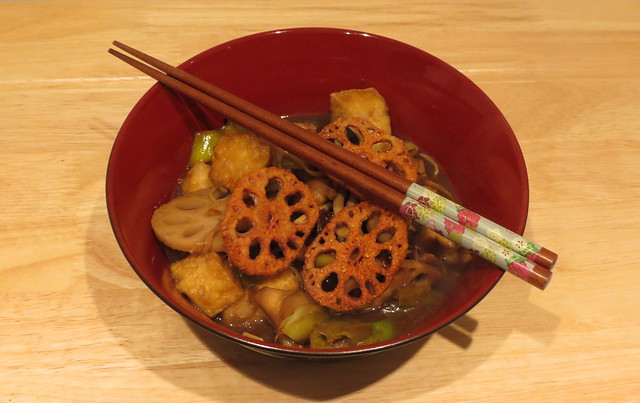 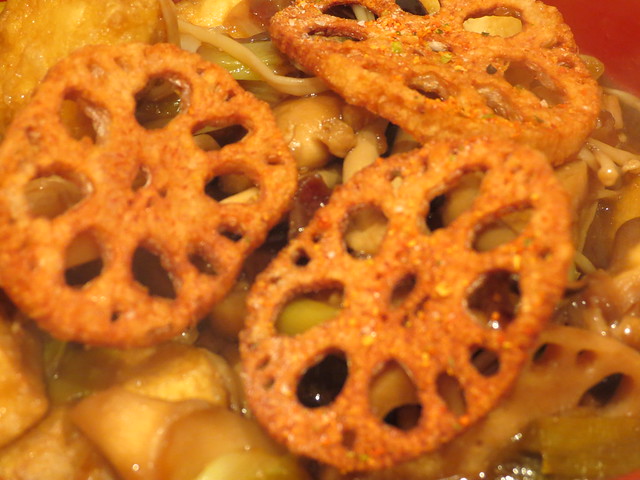 I think the key to the success of this recipe was preparing all the ingredients in little bowls before I began cooking. I chopped all the veg, tofu etc and had everything laid out so I could just throw it in the pan. It made for a lot of washing up, but a very yummy dinner!

Find out more about The Hairy Bikers on their website: hairybikers.com.

I’m going to take a little break from cooking as I’m deep in preparation for my trip to Japan at the moment. I’ll be back in July with a new recipe though! If you have any suggestions, or perhaps you would like me to try one of your recipes from a book or website, please leave a comment below or get in touch! All the recipes I try on this blog have some connection to Japan and, because I don’t eat meat, they need to be vegetarian or pescetarian. I’m particularly interested in helping to promote Japanese recipe books, so do let me know if you have one I might like!