Can you believe I’ve been back from Japan for a month already? Apologies for being so slow at getting my photos uploaded and sharing my adventures with you all. However, now the JLPT is over (for the time being…) I can turn my attention back to blogging. Today I thought I’d share a fishy adventure…

I had never visited Tsukiji fish market (築地市場) in Tokyo before, and to be honest I really couldn’t see the appeal. I like food markets, but the idea of visiting a wholesale fish market just didn’t really interest me. However, I ended up visiting twice during my recent trip to Japan, and I actually found it fascinating!

Arriving at Tsukijishijo Station on the Toei Oedo Line I could smell a faint fishy smell before I even reached ground level. On my first visit I just took a look at the public outer markets, not daring to venture too far into the depths of the wholesale fish market itself. 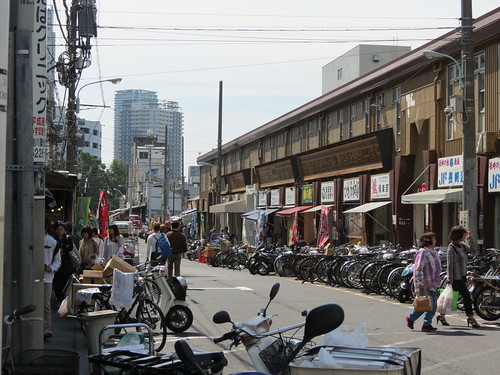 On the outskirts of Tsukiji 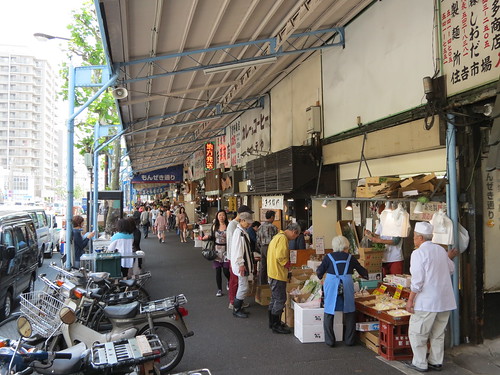 Stalls and shops line the streets around Tsukiji 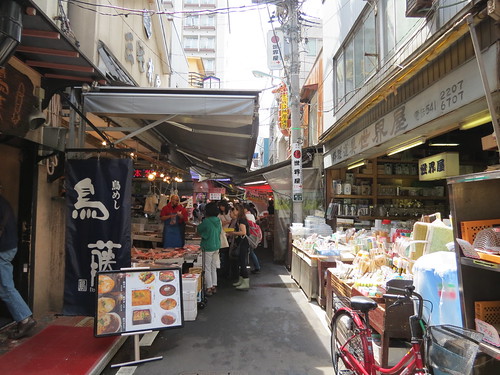 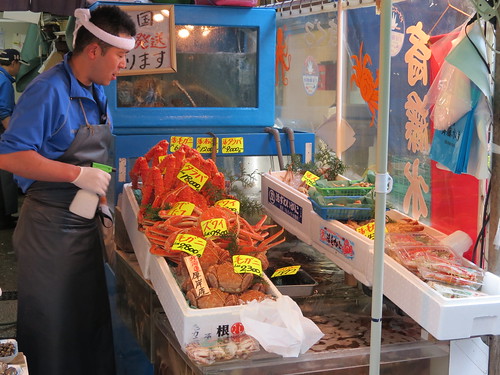 One of my highlights was this amazing tamagoyaki (omelette) on a stick. It was just so sweet and fluffy! (And yes, I do see the irony in going to a fish market and eating nothing but egg…) 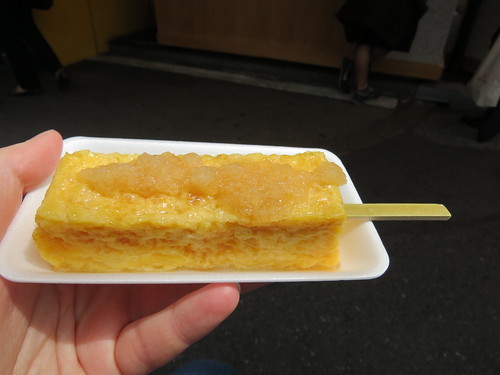 Mmm… egg on a stick! 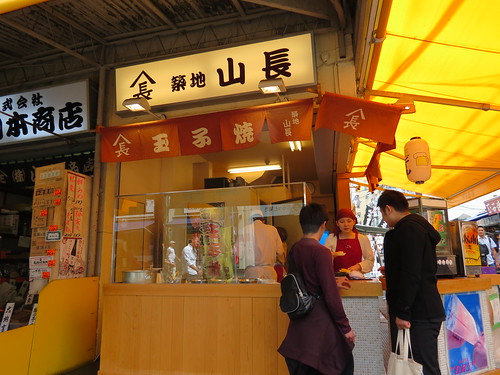 I thought the outer markets were interesting, but it wasn’t until I discovered the inner belly of the fish market the following day that I really felt I’d got to grips with Tsukiji. 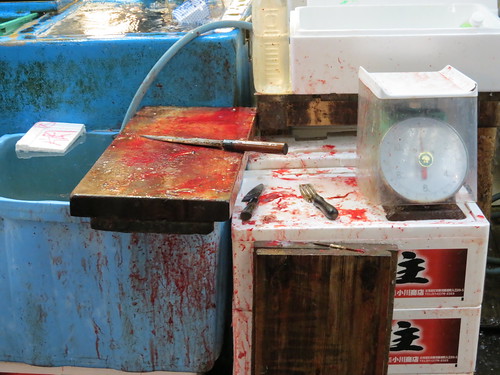 Something ghastly has happened here… (>_<) 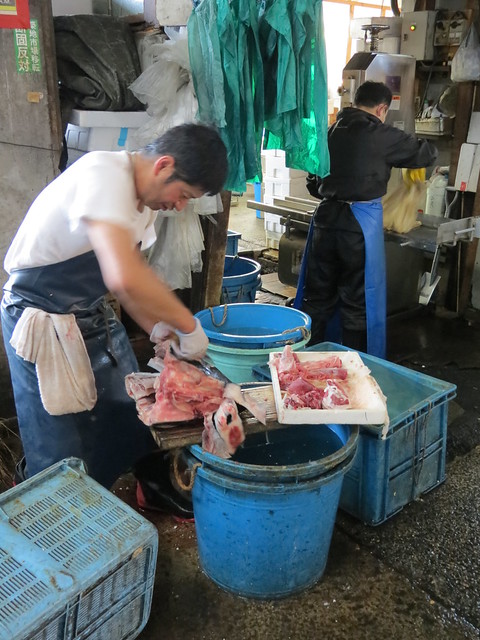 Don’t mess with this guy!

Tsukiji is a popular place for tourists to visit, but it must never be forgotten that it is a working wholesale market and the number one priority here is sales, not sightseeing. Busy at work, people zip around on scarily fast gas-powered trucks and heaven help you if you’re in the way – it simply won’t be tolerated by the market workers, and you can’t blame them really. For the same reason, it’s wise to be careful about where you take photos, and definitely try not to get in people’s faces too much. After all, how would you like it if someone wandered into your office and started taking photos of you working at your desk without permission? 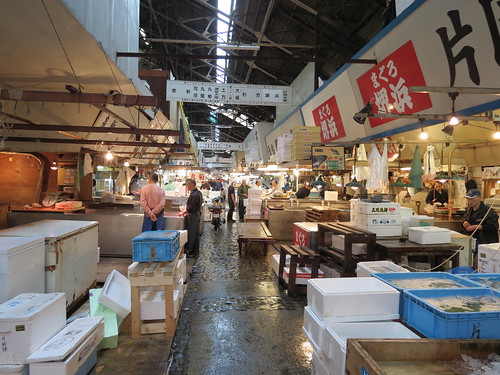 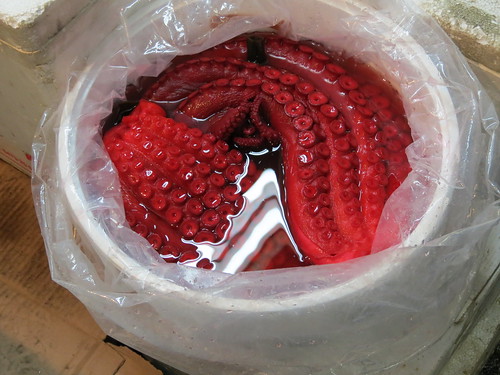 It really was THIS red… 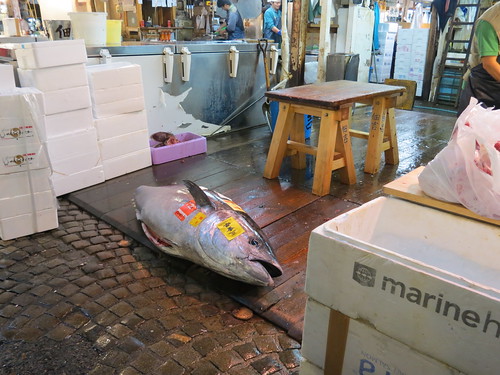 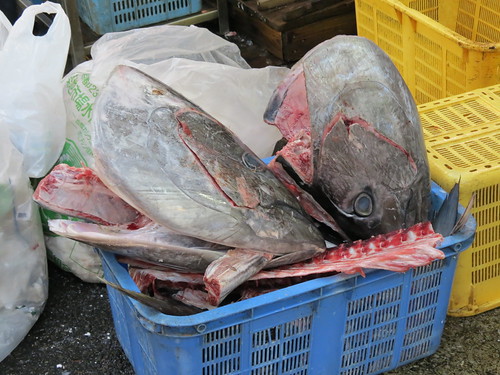 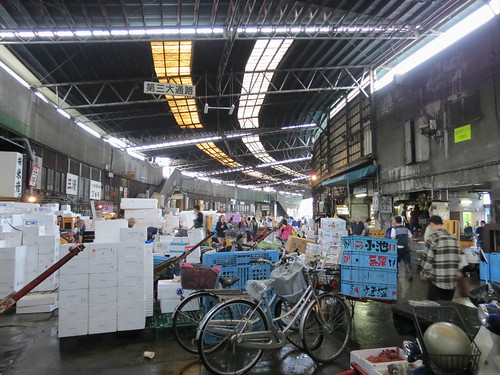 The inner market – watch your back!

There’s talk of Tsukiji moving to a different location, with the move originally planned for 2015 but now likely to be delayed for at least another year. Although the market’s infrastructure just isn’t set up for the volume of tourists that pass through every year, I think it would be a shame to move the market just so more tourists can visit, and I’m sure it would lose some of its character. Tsukiji is grimy and smelly, with fish guts on the floor, but that’s what it’s about.

The market, packed full of sushi restaurants (some of which only seat a handful of people), began in the Edo period, although the market as we now know it wasn’t built until after 1923. The official Tsukiji website has the following to say about the origins of Tsukiji…

It is said that “Uogashi” or a riverside fish market dates back to the 16th century, the beginning of the Edo period. Tokugawa Ieyasu, the first Tokugawa shogun and builder of Edo as is now Tokyo, invited fishermen from Tsukudajima, Osaka and gave them a privilege for fishing in order to let them supply seafood to Edo Castle. The fishermen purveyed fish to the Castle and sold the remains near the Nihonbashi bridge. It was the origin of Uogashi. Then, to meet the growing demand for fish with the increase in population, Nihonbashi Uogashi was reformed and developed into a market. The market was lead by wholesale merchants licensed by the Shogunate who bought fish from local ports, sold them to jobbers in the market and thus built up a large fortune, forming their own distributing network. Vegetables markets handling vegetables gathered in the suburbs of Edo were established in Kanda, Senju and Komagome: the Edo’s three big vegetable markets. The markets attained prosperity led by wholesalers and jobbers like fish markets. During the Edo period the market price was determined chiefly by negotiated transactions between sellers and buyers. Public auction was hardly taken place except in vegetable markets. In the Meiji and Taisho eras, the privilege of wholesale merchants were abolished. In 1923 some 20 private markets in Tokyo were destroyed almost completely by the Great Kanto Earthquake. After the earthquake, Tokyo City as it then was undertook to construct a central wholesale market on the bases of the Central Wholesale Market Law which had been promulgated in the same year. As a result, the three markets of Tsukiji, Kanda and Koto were founded and the growing population then led to a succession of new markets. 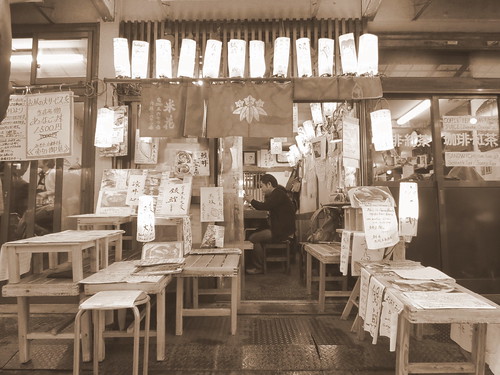 Whatever the future holds for Tsukiji, I’m glad I’ve had the chance to visit the market as it is now. Tsukiji apparently handles over 2,000 tons of marine products per day, and I can certainly say I’ve never seen so much fish in one place before. It really makes you think about how much fish and seafood we consume, and seeing all this fish for sale made me a lot more mindful of making sure my fish is responsibly sourced and making sure I don’t waste any food. The fish I tried in Tsukiji was the freshest, most melt-in-your-mouth fish I’ve ever had, and I’m grateful to have had the chance to taste it! 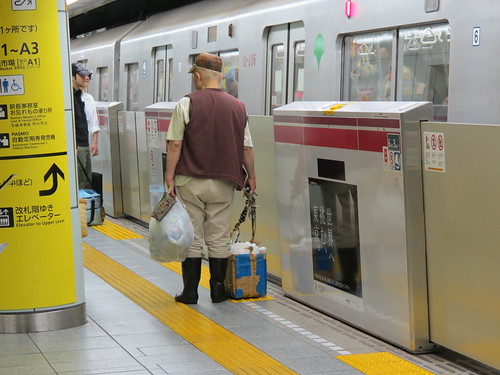