These were great ideas, and the suggestion of ‘nomimasu’ made me think of a word I learnt back in 2008 when I first started teaching in Japan…

First, let’s break the word down. ‘Nomu’ (飲む) means ‘to drink. Those of you familiar with Japanese will no doubt know this word, and know how to conjugate it into ‘nomimasu’ (飲みます). You would use this in a sentence such as ‘watashi wa biru o nomimasu’ (私はビールを飲みます) – ‘I drink beer’. ‘Nominication’ begins with ‘nomi’ (飲み). The rest of the word comes from the English word ‘communication’. Can you guess what it means?

‘Nominication’ is a phrase used to describe ‘communication through drinking’, especially among co-workers. In Japan, it is common to work long hours and then go out drinking with your colleagues. It’s often not really an option to go drinking, but more of an obligation.

Even if you’re not that keen on drinking, or don’t feel like going, attending a ‘nomikai’ (飲み会 / drinking party) is important because this is where ‘nominication’ will take place. After a couple of drinks, people will speak more freely, and it’s a good chance to get in with the boss and try to work your way towards that promotion or pay rise. Japanese culture is very much about being part of the team and not standing out as an individual, so it’s important to take part in group activities. (There is a phrase in Japanese: ‘deru kugi wa utareru’ (出る釘は打たれる) which means ‘the nail that sticks out gets hammered down’.)

Nominication: I think this add says something like “The aim is to make 100 drinking buddies”.

It’s common to see a drunk ‘salary man’ (サラリーマン) passed out on a train or station platform, having worked a long day and then been out drinking all night. This is one of the reasons capsule hotels (カプセルホテル) were invented! Capsule hotels are a convenient and cheap place to curl up for the night if you’ve been out drinking and have missed your last train. 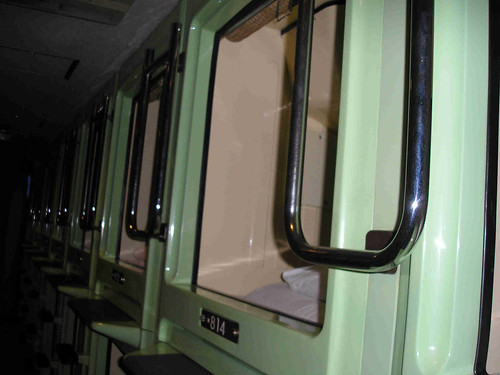 Unfortunately, not all people make it to a capsule hotel. There was an initiative in Japan recently to turn sleeping drunks into human billboards, shaming them into better behaviour. Here’s a video about the project:

Nominication is an important part of working life in Japan, but don’t let it go too far!

Next week’s post will be about a word or phrase beginning with ‘ha’ (は), so please leave your suggestions below. The word can be a verb, adjective or expression, but no nouns please! For example, ‘hajimemashite’ (はじめまして) meaning ‘How do you do?’ would be acceptable, but ‘Hakone’ (箱根), the place, would not. I look forward to reading your ideas! (*^_^)v