There were some great ideas this week! In the end I decided to write about…

The only meaning of the word ‘miso‘ that I knew before was ‘bean paste’, as in the bean paste that makes up delicious miso soup. 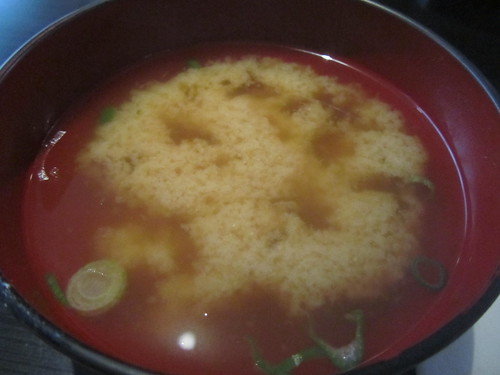 Of course, that’s not what I’m writing about today! Yukiko taught me that ‘miso’ can have another meaning. ‘Miso’, she told me, “can refer to a small kid, who is allowed to play games with bigger kids but not counted as a serious player. For example, “Yuki-chan wa miso ne” (ゆきちゃんはミソね)”. Yukiko thinks this might be Tokyo dialect, but she’s not sure. I’ve certainly never heard this before, and I can’t find anything about it online. This use of ‘miso’ could also apply to someone who just started at a company and didn’t yet feel like they were ‘playing properly’. They’re adding some flavour, but not yet a key ingredient.

In contrast, the other usage of ‘miso’ that Yukiko mentioned was as the ‘key’ or ‘important’ feature. For example: “koko ga miso dakara yoku kiite ne” (ここがミソだからよく聞いてね), which means “this is the main point, so listen carefully!”. Another example, from Jisho.org, is: “kono denshi jisho wa keitaishiyasuitokoro ga miso desu” (この電子辞書は携帯しやすいところが味噌です) – “The good thing about this electronic dictionary is that it’s easy to carry”.

Whilst researching uses of the word ‘miso’ I discovered that apparently city people used to sometimes say “you smell like miso” to mean “you come from the countryside” (source). I also found a proverb with ‘miso’ in it: てまえみそ (temae miso) which means ‘singing one’s praises’. The proverb envisions a person who is raving about the greatness of their own home-made miso (source).

Finally, there’s one more use of ‘miso’ I heard a while ago in a phrase: “choshoku-no miso-shiru-o tsukutte kureru?” (朝食のみそしるを作ってくれる？). This phrase literally means “will you make my miso soup for breakfast?” but actually this is a marriage proposal!! It’s a phrase that’s very telling of Japanese culture – the wife is typically expected to get up early and make breakfast for the family.

Next week’s post will be about a word or phrase beginning with ‘mu’ (む), so please leave your suggestions below. The word can be a verb, adjective or expression, but no nouns please! For example, ‘muzukashii’ (むずかしい) meaning ‘difficult’ , would be acceptable, but ‘musume’ (娘), ‘daughter’, would not. I look forward to reading your ideas! (*^_^)v