Continuing on from my Naruko Onsen (Part 1) post, I’m finally back with Part 2! (Sorry it’s taking me forever to write up my Japan adventures!) On Wednesday 28th May, I woke up relaxed and refreshed in Naruko Onsen (鳴子温泉) and ate the most amazing breakfast at the Taishokan (大正館) ryokan. The food there was just so good – really fresh, made with local and seasonal ingredients. 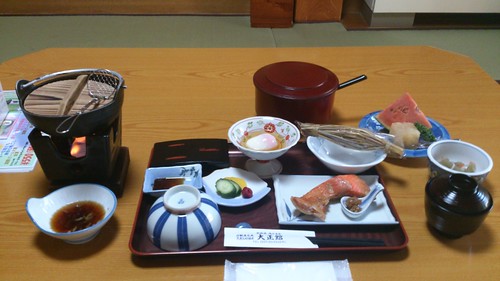 Oh how I miss Japanese breakfasts…

I was a little unsure about getting around Naruko by myself and without any transport, so I had arranged for a guide to meet me for the day. I wasn’t sure what it would be like to have a guide, but it was a fantastic experience and I got along so well with my guide, Matsumoto-san. We managed to cover a lot of ground that day, and it was a bit of a whirlwind, but I was so grateful to Matsumoto-san for planning such a detailed and perfect itinerary for the day.

First we drove to Katanuma lake (潟沼). Katanuma is believed to be the volcanic crater lake of the Naruko Volcano (鳴子火山群) and is surrounded by mountains Kurumigatake, Ogatake, Matsugamine and Toriyagamori. The lake is 306 metres above sea level and 16.2 metres deep at its deepest point, and was created over 1,000 years ago. Katanuma is known as one of the most acidic lakes in Japan, with a pH of around 1.6. There are no fish in the lake and it doesn’t freeze over due to its boiling springs. Curiously, I did see some ducks on the lake though. Legend has it that the lake is owned by a female dragon god and every year on the eve of the Doll Festival (which takes place on 3rd March) she can be heard weaving material from the middle of the lake. Katanuma is also known as Ryujin Lake or ‘lake of the dragon god’. 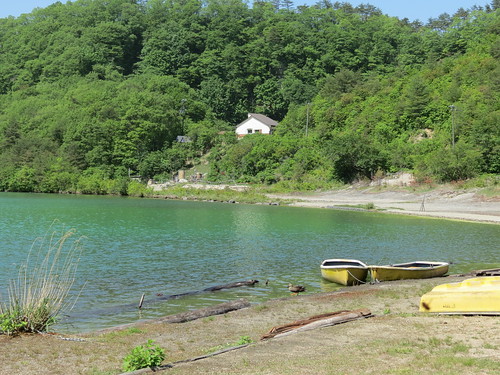 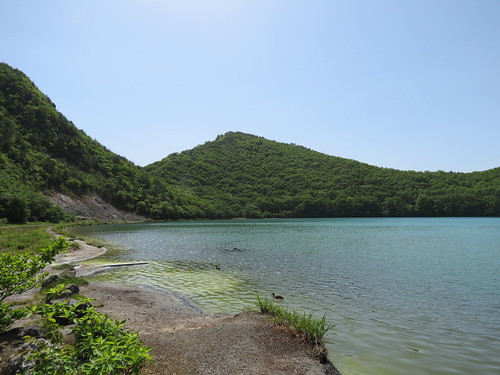 Throughout the day one of the main themes was haiku poet Matsuo Basho (松尾 芭蕉). We went to a few famous places that Basho visited when he was on his epic walk across the north of Japan, Oku no Hosomichi (奥の細道), as well as parts of the Oku no Hosomichi itself. It was a real dream come true for me to follow in Basho’s footsteps, even if only for a few metres. 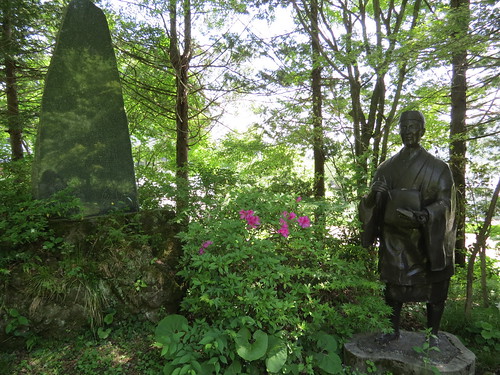 Matsuo Basho at the Shitomae Barrier 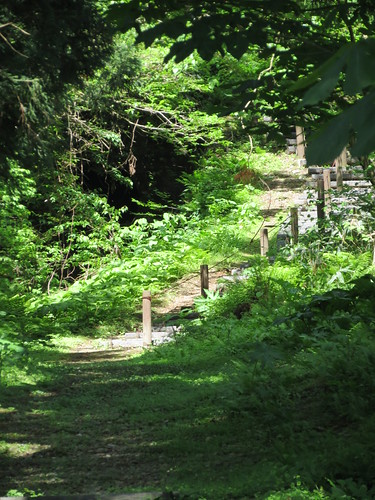 We stopped at the former site of the Shitomae no seki (尿前の関) or Shitomae Barrier, which Basho and his travelling companion Sora passed through in 1689 (after a bit of trouble convincing the guards to let them through). There’s a pretty little area now with a sign for tourists: 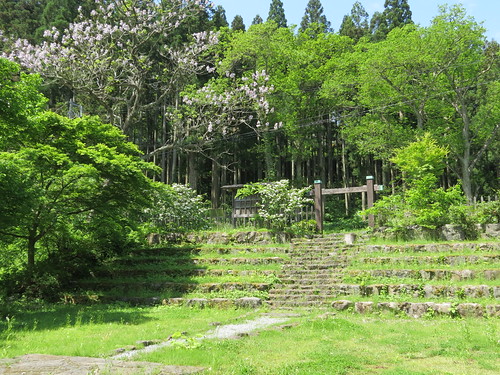 But my guide showed me a place up the road a little which she said was the actual site of the old barrier. 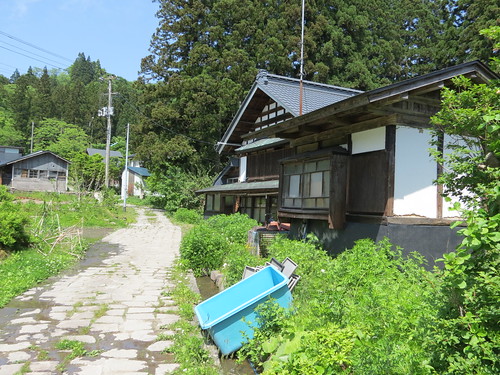 Next up was Naruko-kyo (鳴子峡), or Naruko Gorge. It was impressive to see, but would have been even more impressive had I gone in the autumn. 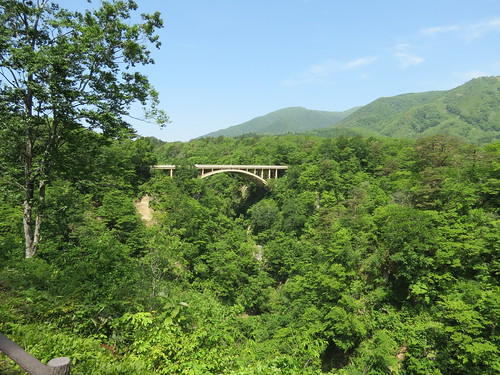 This is how it looks when the autumn leaves are at their best:

I’ll simply have to go back in autumn!

Our next stop was Basho’s next stop after he finally made it through the Shitomae Barrier – Hojin no ie (封人の家), the House of the Border Guard. 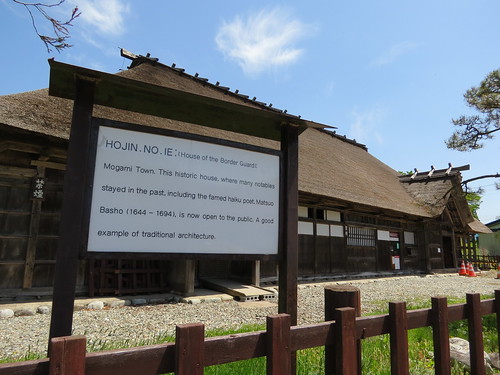 Hojin no ie (House of the Border Guard)

Basho and Sora stayed one miserable night here when they couldn’t find anywhere else, and Basho wrote the following haiku:

There are various translations of this haiku, but the one I like best (by Lesley Downer) is: 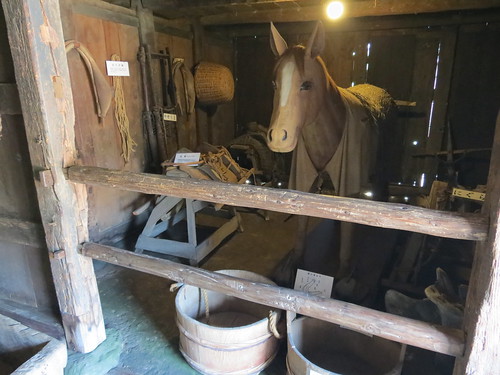 And there’s the horse…

My guide showed me around the house and pointed out all of the different rooms. She mentioned that it was quite unlikely that Basho would have been sleeping close enough to the stable to hear the horse pissing in the night, and it was more likely that he was just feeling grumpy and using a bit of artistic licence.

Hojin no ie was really interesting, and conjured up a true feeling of the past. 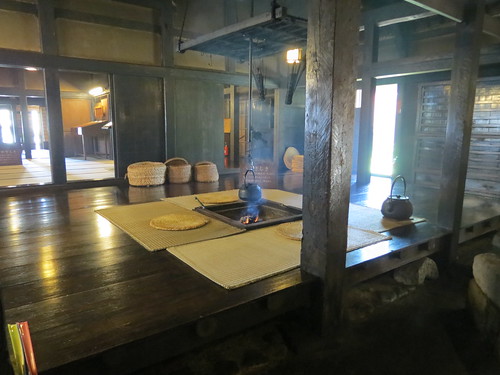 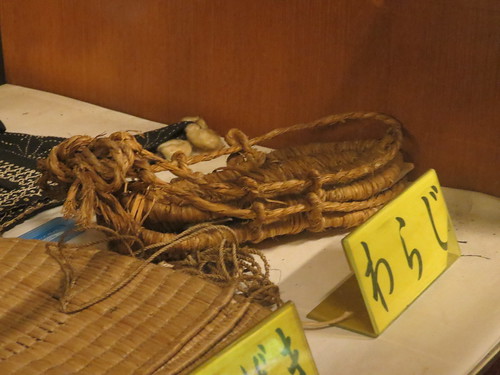 After a short drive, I caught another glimpse of the Oku no Hosomichi – this time the Natagiri-toge (山刀伐峠), or Natagiri Pass. 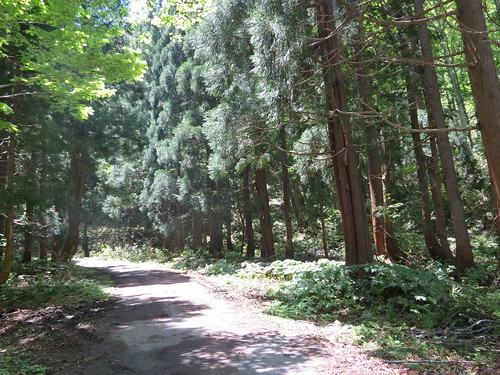 Natagiri-toge and the Oku no Hosomichi

We fuelled ourselves with some soba noodles for lunch… 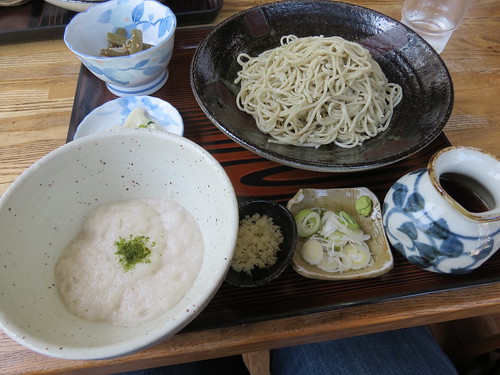 And then stopped by a place called Bunsuirei (分水嶺), which is the point where the Sea of Japan (日本海) and the Pacific Ocean (太平洋) meet – the ‘divide point’. 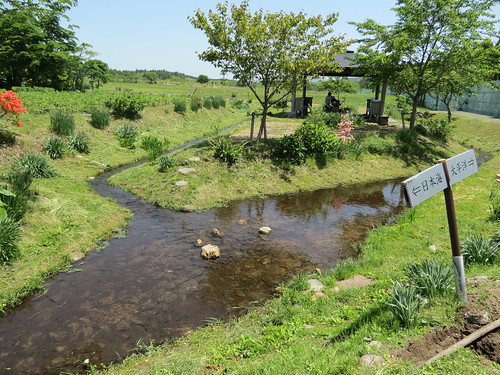 Bunsuirei – the divide between the Sea of Japan & the Pacific Ocean

Our next stop was a place I have been longing to go to. I simply couldn’t have done this trip without visiting the Nihon Kokeshi Kan (日本こけし館), the Japan Kokeshi Museum. 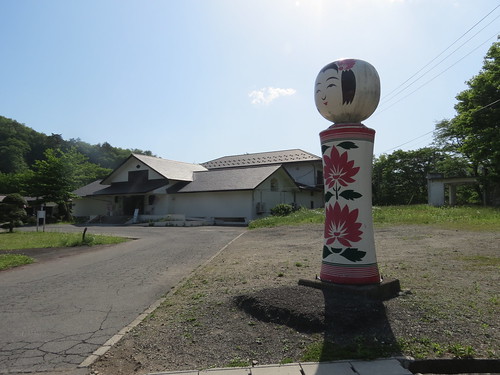 Kokeshi (こけし) dolls, which I adore and collect, originate from the Tohoku region. These simple wooden dolls were originally made as play things from left-over wood, and date back as far as the 1800s. Eventually they were sold as souvenirs in hot spring towns all around Tohoku. Each region has their own distinct way of painting and decorating the dolls, some with stripes, others with flowers, some with large noses, others with barely a nose at all. The museum had more kokeshi dolls than I could ever dream of and, as photos weren’t allowed, I settled with trying to look each one in the eye so I could remember their faces.

As luck would have it, even though we were the only visitors at the time, a kokeshi craftsman called Mr Akihiro Sakurai (桜井昭寛) was there and he showed us how the dolls are made and painted. It was quite incredible to watch! Sakurai’s master was his father Shoji, and he has a store near Naruko Onsen Station. 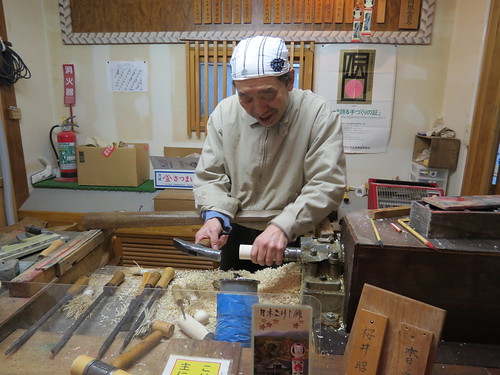 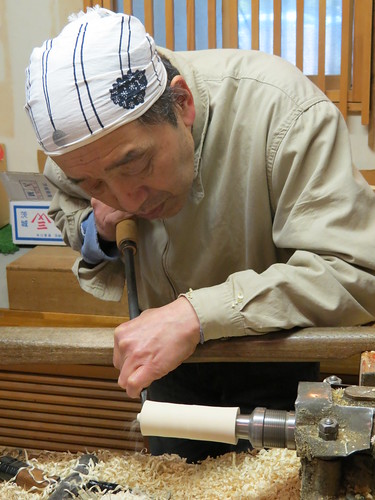 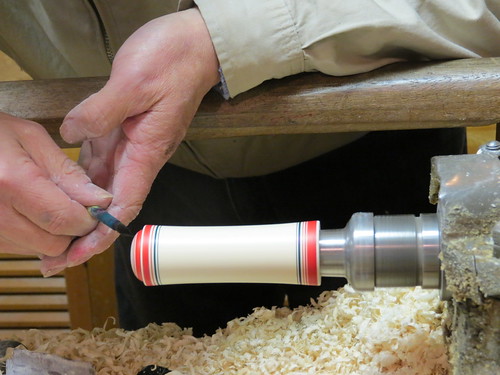 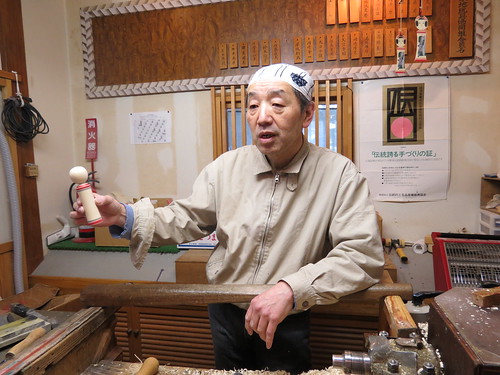 I loved the Kokeshi Museum and could have stayed all day! I also could have bought one of each of the dolls in the gift shop if only I’d had the money!

Coming out of the Kokeshi Kan, Matsumoto-san and I walked a little more of the Oku no Hosomichi. She seemed quite intrigued by my fascination for Basho and kokeshi dolls, and said I should be called ‘hai-jo’ (Haiku Girl) or ‘koke-jo’ (Kokeshi Girl). 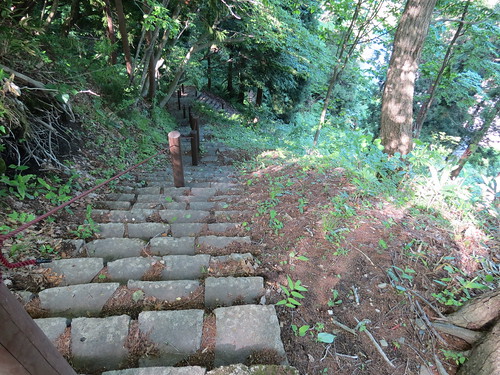 A few more steps on the Oku no Hosomichi

Our final stop was the best part of the day (although I didn’t think it could get better). We visited a kokeshi craftsman named Mr Taketoshi Takahashi (高橋武俊)’s workshop. The shop is called Takakame (高亀), and it’s a shop with 230 years of history. Takahashi’s master was his uncle, and he’s the 10th generation to run the shop. 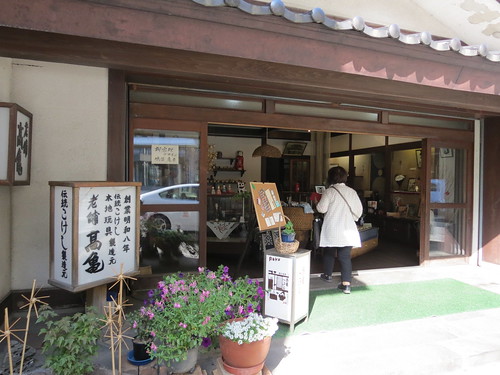 Takahashi-san didn’t speak any English, but he didn’t seem to mind me and Matsumoto-san asking to have a go at painting kokeshi dolls. He carefully explained each step of the process and, with my white cotton glove on, I had a go. 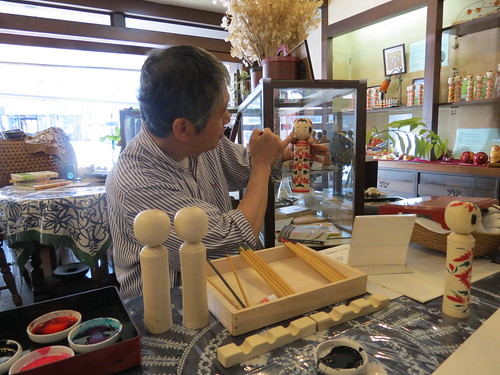 Takahashi-san showing us what to do 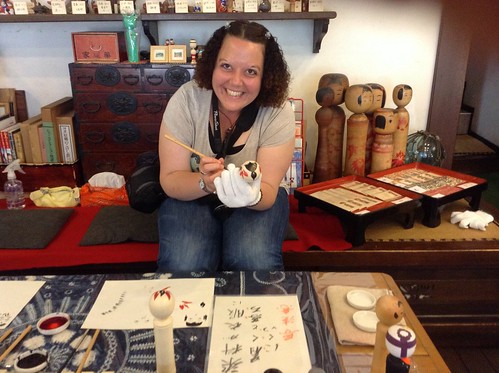 I could have done better with the flowers, but I’m really pleased with the face. 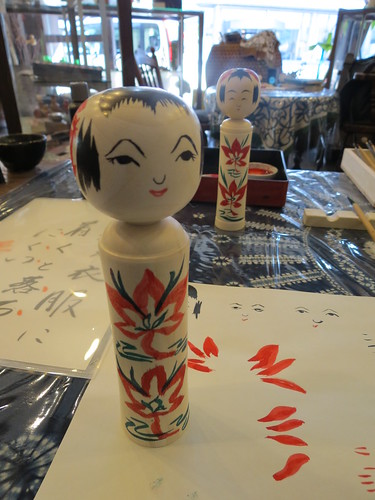 Not bad for a beginner! 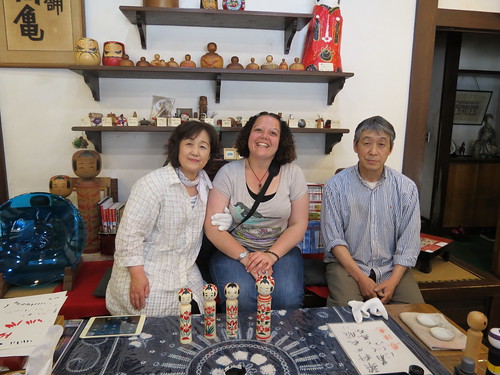 My guide, Matsumoto-san, and I with Mr Taketoshi Takahashi at his workshop Takakame

My guide left me back at the Taishokan, where I was fed another amazing meal with accompanying local beer. 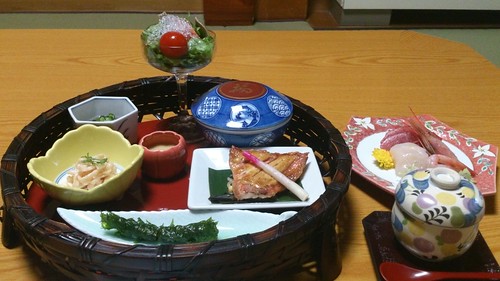 Dinner at the Taishokan – seriously some of the best food I’ve ever eaten!

That night I slept peacefully, dreaming of the calming faces of kokeshi dolls and the quiet Oku no Hosomichi… 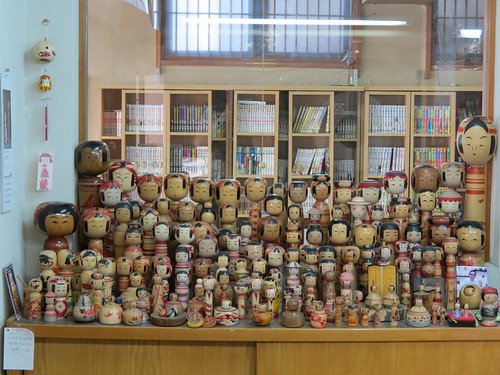 Kokeshi collection at the Taishokan

At this point in my trip I still had 11 nights left in Japan (out of 29). It’s taking me an age to write up all my adventures, but what adventures they were! Stay tuned for the next post in this series, where I’ll be heading to Hiraizumi…