I know, I know… I really need to get these posts finished! I’m not quite sure where the year has gone, but back in June I was exploring Kamaishi (釜石) in Iwate Prefecture (岩手県) and now it’s about time I told you about it.

Kamaishi was not a place I had heard of until 2011, when it was badly hit by the Tohoku earthquake and tsunami (around 1,250 residents were lost). In fact, it wasn’t even somewhere I planned to go until I learnt that there was a large Buddha statue there and that a festival happened to coincide with my passing through the area (see my post about the Kamaishi Daikannon). Kamaishi is a small industrial town known for steel and fishing, located on the Sanriku (三陸) rias coast. 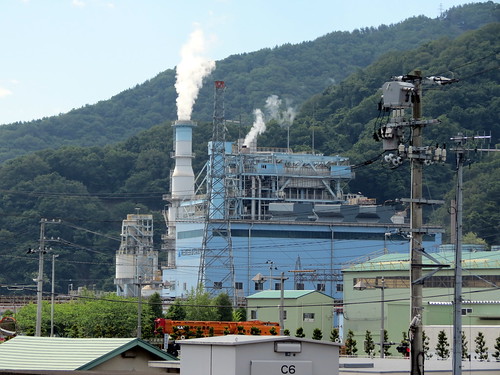 After attending the festival at the Kamaishi Daikannon I couldn’t find a bus or taxi to take me back to town, so I decided to walk. The walk took about 45 minutes, and it was blazing hot. Surprisingly, there wasn’t a single shop or vending machine along the way. Instead, what I did see was a whole lot of rebuilding work. It was a very weird feeling to be walking along the coast in an area which only just over 3 years previously had been utterly devastated by a tsunami. 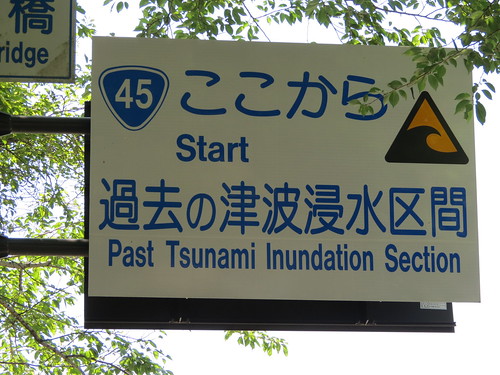 As I walked, it was hard to know whether what I saw was tsunami-related damage or simply progress, but my feeling was that everything in Kamaishi had been touched by the tsunami in 2011. 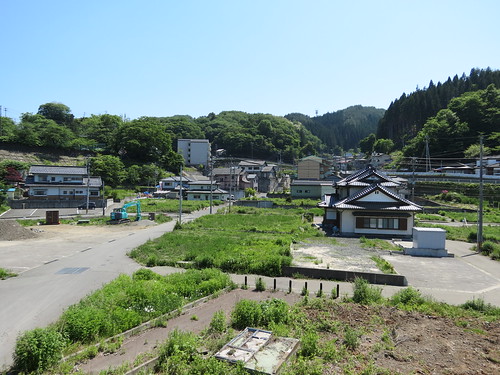 How many more buildings once stood here?

There were vast amounts of flat land, and I could only assume there had once been buildings there. 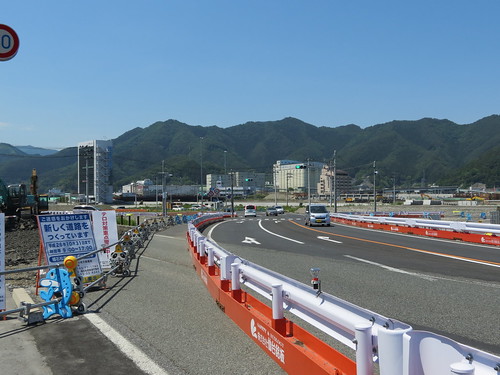 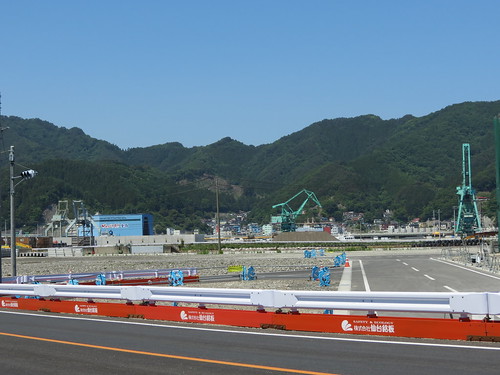 Kamaishi is not an unattractive town, despite everything it has been through. In fact, it’s quite pretty in places. 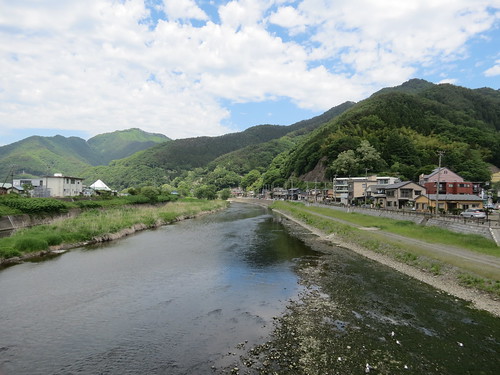 The JR Kamaishi Line even boasts a new steam locomotive (SL Ginga / SL銀河) which I was lucky enough to glimpse on one of its rare outings! 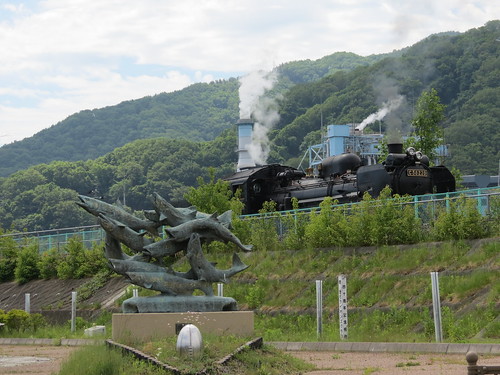 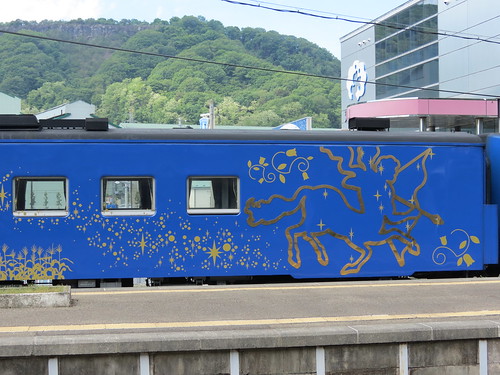 Near my hotel was an area filled with temporary shops and restaurants. In my naivety I hadn’t actually expected to see these temporary buildings so long after the tsunami, but the sight of them reminded me just how much work is still to be done. 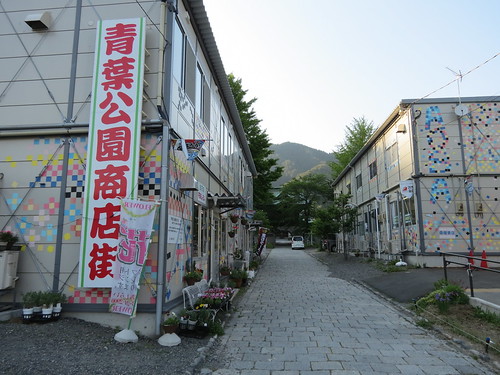 This small restaurant sold seafood spaghetti, which was really good. It was only large enough to seat about 12 people, but I can’t image they were doing a roaring trade. 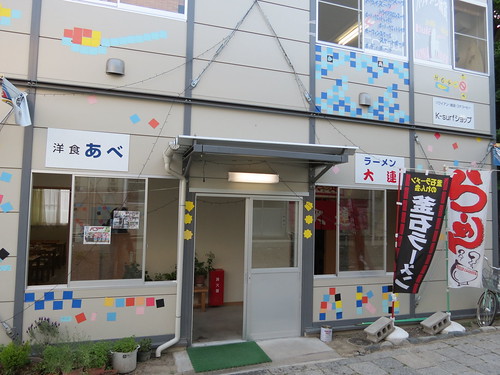 The restaurant was run by an old couple who had lost everything. They were just doing all they could to keep going, like everyone else in the town. 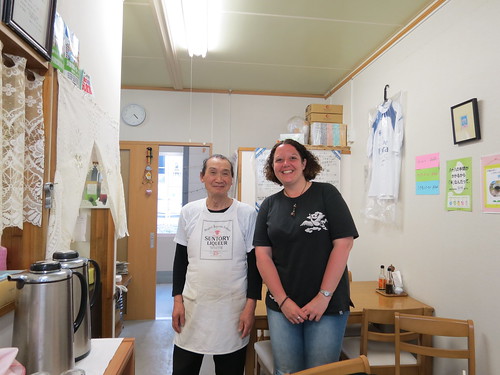 Me and the owner of a temporary restaurant in Kamaishi

That being said, elsewhere in the town things are redeveloping faster. A massive AEON shopping mall has been built, which I imagine can’t be doing much to help people like those running the little independent restaurants and shops. 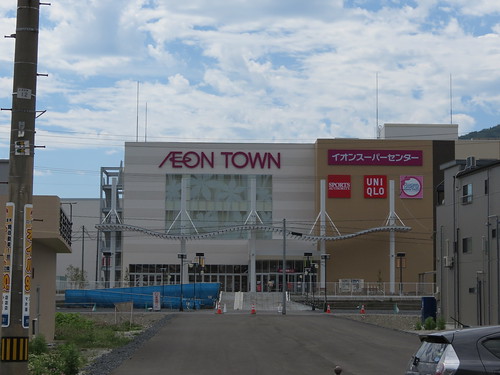 I know the town needs this, but I feel sad for those who lost small businesses in the tsunami and can’t afford to rebuild or compete with the giants in the mall.

Near my hotel and the temporary shops, I found a temple called Sekiozenji (石応禅寺), which I think was founded by the same person as the Kamaishi Daikannon. 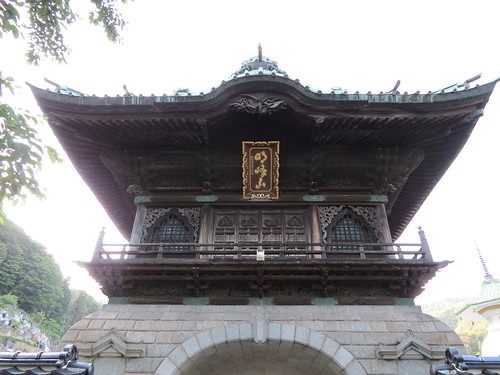 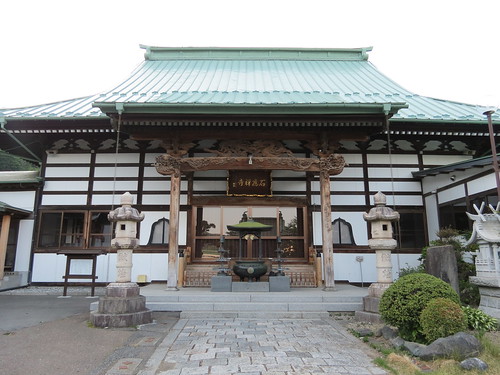 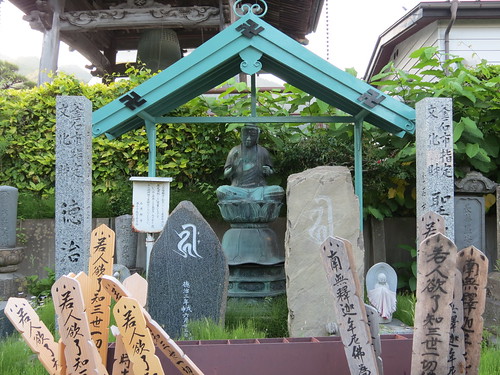 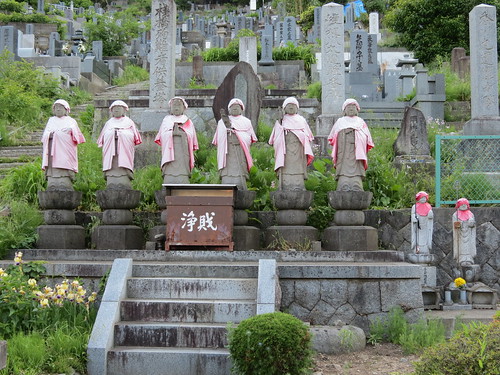 At the entrance to the temple is a statue with a monument stating that the tsunami waters came this far into town. Standing there, I found it hard to believe the water had come so far, but then I remembered all the things I saw on TV at the time; that wave that wouldn’t stop. 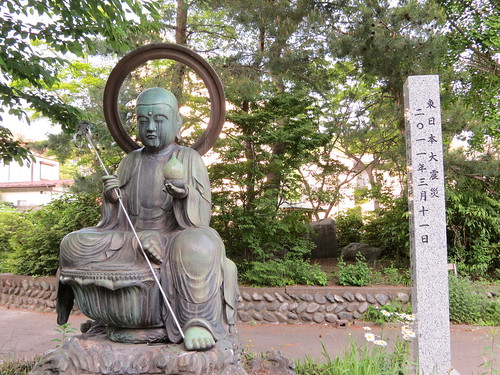 On the map below you can see the temple’s location and how far away it is from Kamaishi Port (about 2km as the crow flies).

I went back to my hotel for the evening with a konbini dinner as there wasn’t a huge amount to do in the town and I was tired and a little sunburnt. I was staying at the Hotel Sunroute – one of the few business hotels in town. I have to say, it was the worst of the 18 hotels I stayed in during this trip, but I can’t find it in me to say anything too bad about the hotel given its location. According to this blog, the hotel suffered damage up to the second floor during the tsunami. The room was just a bit sad and depressing, and the hotel felt tired and old. I’m sure eventually it will get refurbished, but for now I guess there’s not a massive demand for hotels in this town. 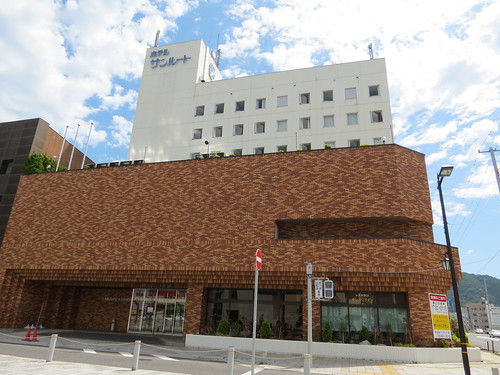 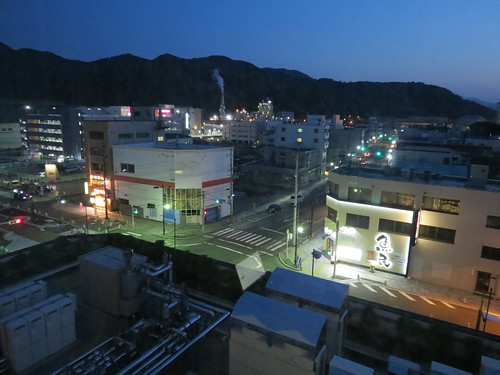 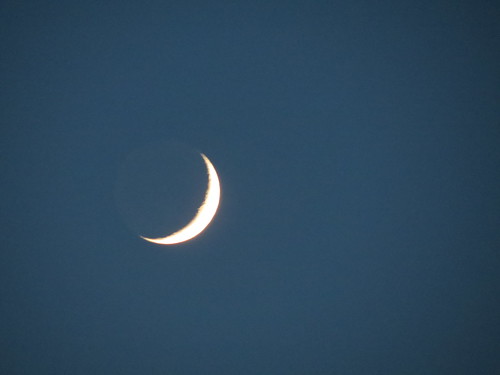 I woke early, feeling like I needed to see more, so I went for a wander along the coast. I felt like I shouldn’t be in some places, but I think I felt that way because there were no defined pavements in some areas and I wasn’t sure where I was exactly. I was also conscious of offending someone if they thought I was just some kind of ‘disaster tourist’ or that I was going to interfere. There was a lot of building work going on, but also quite a number of ruins still standing. The thing that got me the most though were the gaps. In between buildings there would just be these gaps where I could only assume a building had once stood. Where had it gone? Where had the people gone? 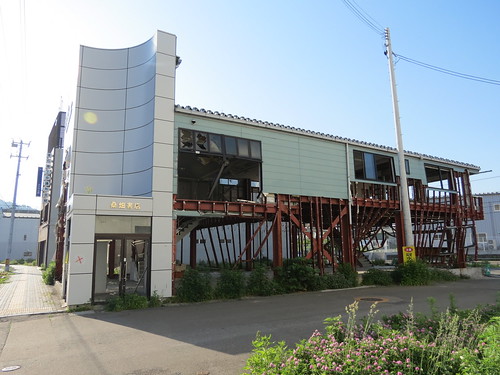 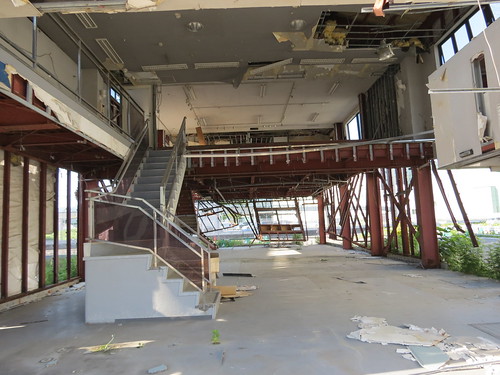 You can see the power of the water that rushed through. 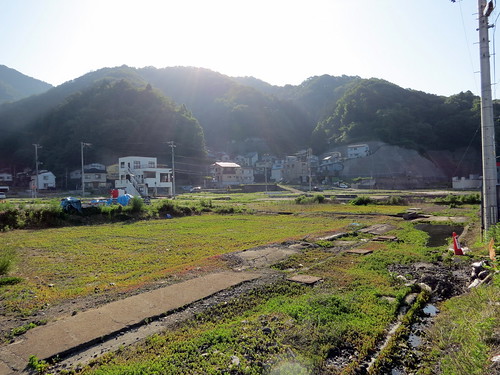 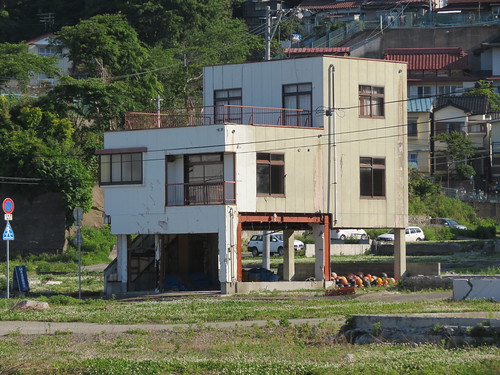 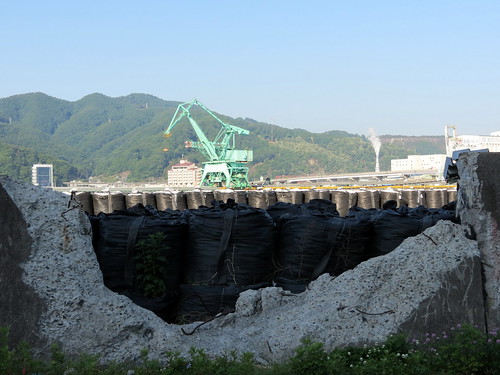 Defenceless against the sea.

Kamaishi is not somewhere many tourists would go, nor would they ever have done, but I’m glad I stopped by on my journey. It’s good to see that the town is rebuilding and developing, even if that progress is slow. がんばって東北！ 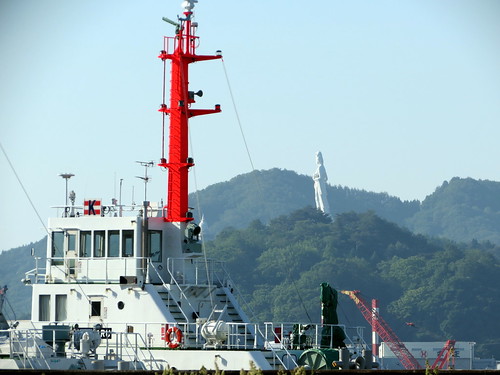