With still a week left in Japan, on 2nd June I set out on one of my most complicated journeys. One thing I had been determined to do when I had begun planning my trip around Tohoku was to travel down the Sanriku Coast – the coast hit by the tsunami in 2011. It’s hard to explain why I felt I had to do it, but having spent so much time thinking about this part of Japan and attending various charity events for Tohoku where I saw images from the stricken area, it just seemed necessary.

Just a couple of months earlier on 6th April 2014, the Sanriku Railway (三陸鉄道) had resumed services between Kamaishi and Yoshihama stations on the coastal Minami-Rias Line, restoring it to full operations. I had been following news of this closely, as the first part of my journey depended heavily on being able to ride this train.

I was on the road from about 8:30am to 6pm in the end, and it was a long and quite draining day. I’d worked out all of the connections, but unfortunately there was quite a bit of waiting around to do en-route as most of the trains and buses didn’t connect up that well. First I had the pleasure of riding on the newly opened Sanriku Railway: 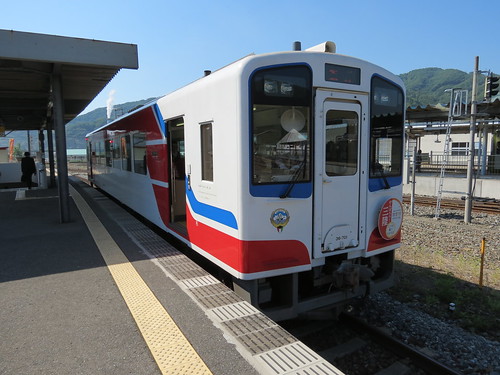 The train was shiny and new, and full of pictures of smiling people. 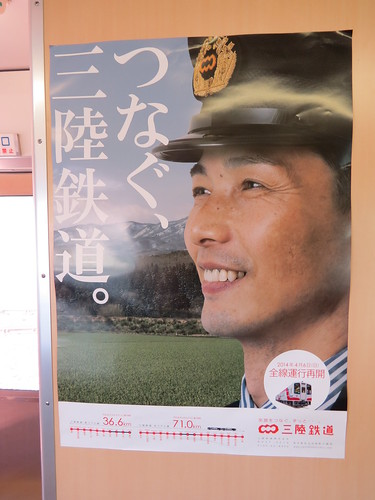 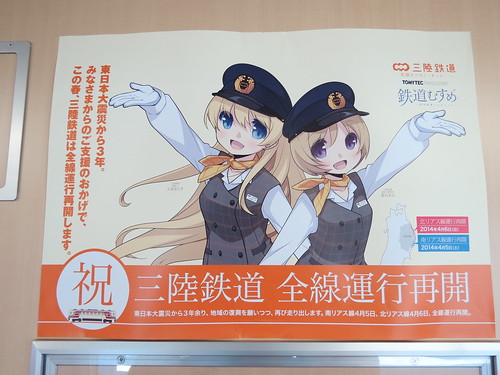 I was glued to the window for most of my journey, just taking in the view. In places you wouldn’t have known anything had happened – it was a clear and sunny day, and the sea looked beautiful. But in other areas the signs of destruction and reconstruction were abundant. 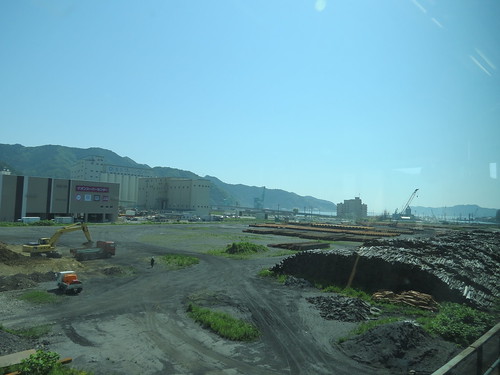 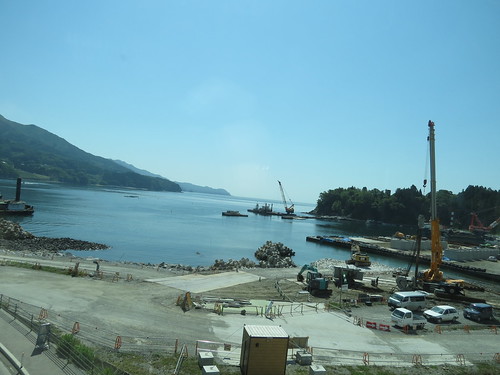 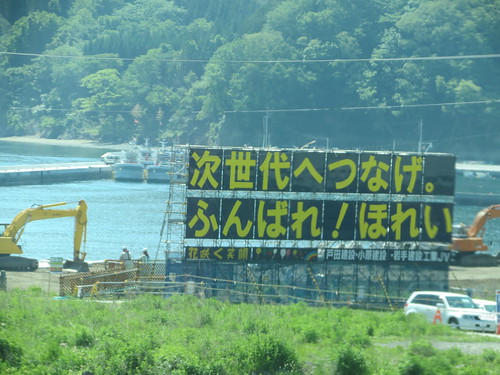 I’m not sure exactly what this sign says, but I think 「ふんばれ！」(funbare) means something like ‘stand firm’ or ‘persist’. 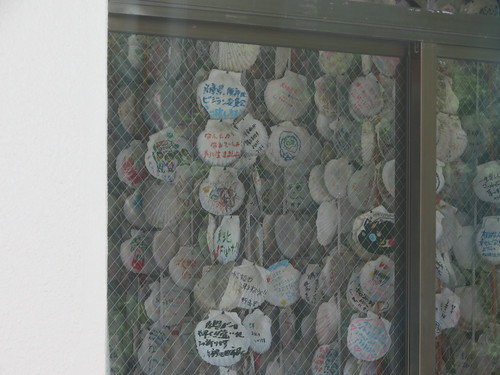 I spotted these seashells with messages on them from the window when we were in one of the stations.

After more than an hour’s wait at Sakari (where, honestly, there is nothing to do), my bus finally came along. 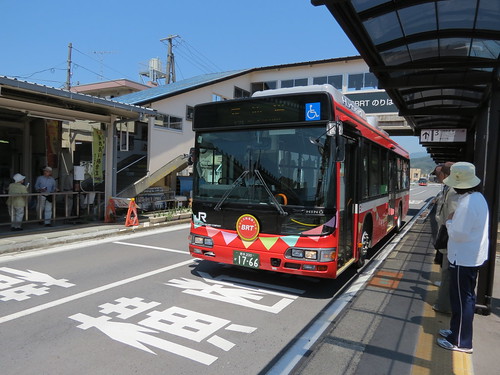 The view between Sakari and Kiseki-no-ippon-matsu was just as interesting, and it wasn’t just me with my face pressed against the window. The bus was only about half full, and I was the only non-Japanese person, but everyone looked fascinated by the world outside. The other passengers were taking as many photos as I was. I couldn’t help but wonder who they all were. 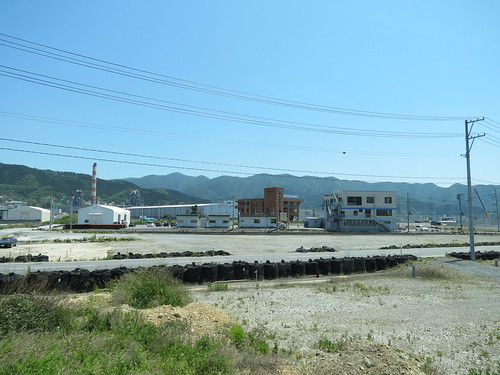 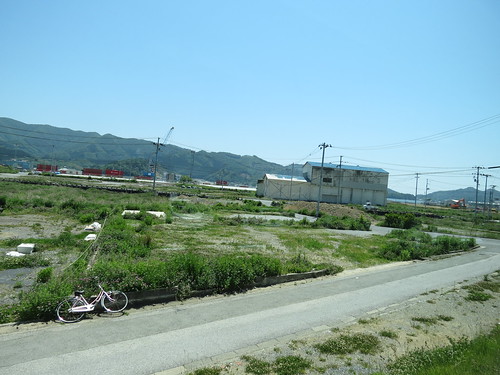 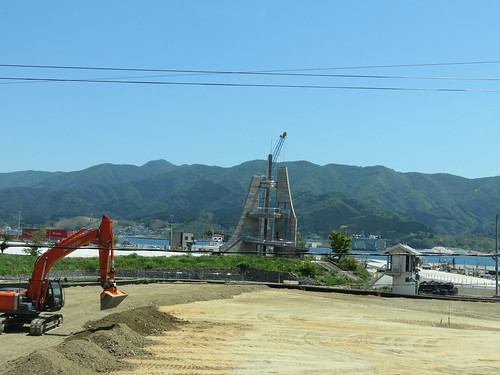 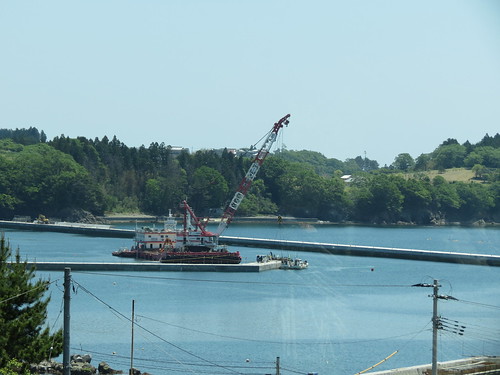 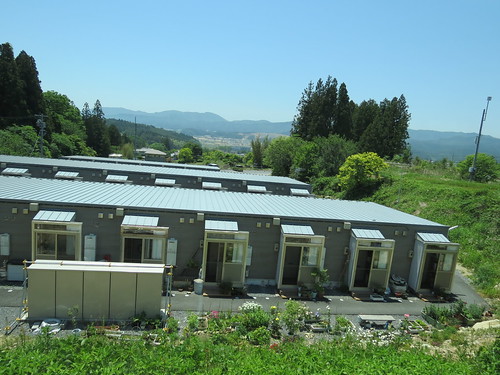 At about 11:30 I arrived at Kiseki-no-ippon-matsu. 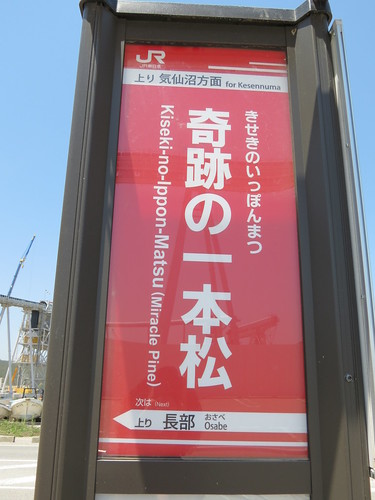 I got off the bus and, as I watched it drive away, I wondered where on earth I was. I don’t know exactly what I had been expecting, but this wasn’t it. 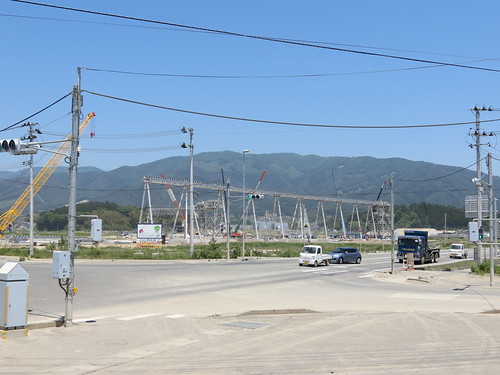 Vast, dusty ground stretched out in front of me and there was a constant chugging of machinery in the background. If it hadn’t been for the occasional car passing through I would have felt like I was in Star Wars or something.

I suppose I had expected more of a town. I had read about the Miracle Pine Tree and even donated online to help save it as a monument, and I suppose I just expected there to be some buildings, some souvenir shops, perhaps a few more signs of life.

Behind me was the only sign of human life that looked approachable – a small cafe in a temporary building. I couldn’t see the pine tree or a sign pointing me in the right direction, so I decided my best bet was to try the cafe staff for directions. 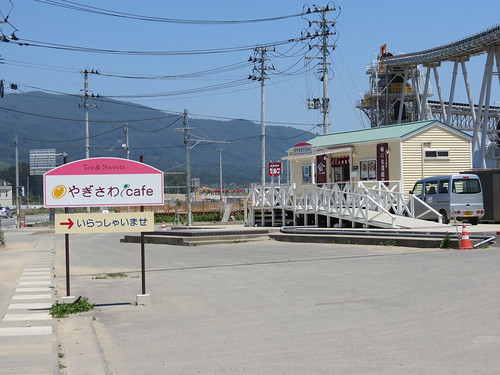 Inside I found a lovely lady who didn’t seem too surprised to see this crazy, sweaty foreigner appear asking 「奇跡の一本松はどこですか？」 (Where is the Miracle Pine Tree?). She took me outside, showed me which path to follow, and then offered to look after my bag for me. Without much thought I left my bag with her. What was she going to do with it anyway? This was the middle of nowhere, and this was Japan!

Going to see the Miracle Pine Tree was a bit of a pilgrimage for me. Before the 2011 Tohoku earthquake and tsunami, Rikuzentakata was known for the Takata Matsubara (高田松原) – a two kilometre long stretch of shoreline covered by around 70,000 pine trees. This view was selected as one of the 100 Landscapes in Japan (日本百景) in the Showa era, although I have to confess I had never heard of it before. In 2011 all but one of the pine trees were washed away. The remaining pine tree stood as a symbol of hope for the local community, and became known as the Miracle Pine Tree. The tree actually died, but it was removed temporarily and preserved as a monument to those that lost their lives in the disaster. There has been a lot of discussion about whether or not preserving the tree was a good use of money, but the fact is it has been done now, and here it stands as a symbol of hope to all those that see it. Heaven knows there’s not much else to be hopeful about in Rikuzentakata at the moment – let them have the tree.

A gravelly, dusty path leads to the tree, which is hidden from sight at first by the building work going on around it. One building remains beside the tree, presumably as a symbol of what happened. 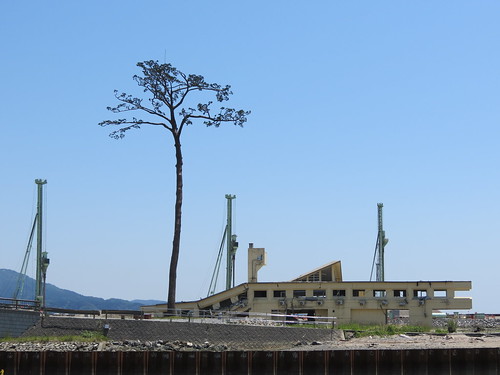 All around and above me were these bizarre things which I later learned were enormous conveyor belts transporting large volumes of soil from neighbouring mountains into the city centre. The idea of the conveyor belts is to reduce traffic in the city and speed up construction. (Japan Guide) 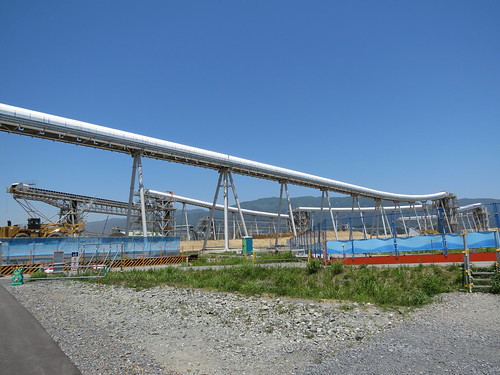 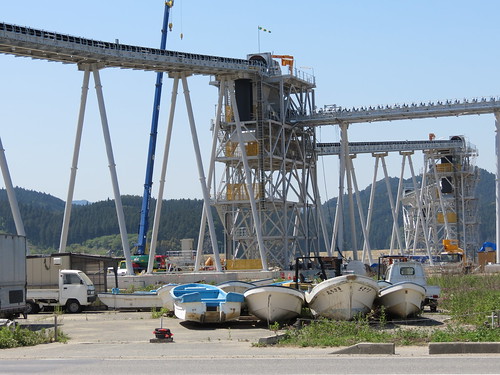 Along the path I noticed some padlocks on one of the fences. They looked like ‘love locks‘, but I’m not sure if they were. 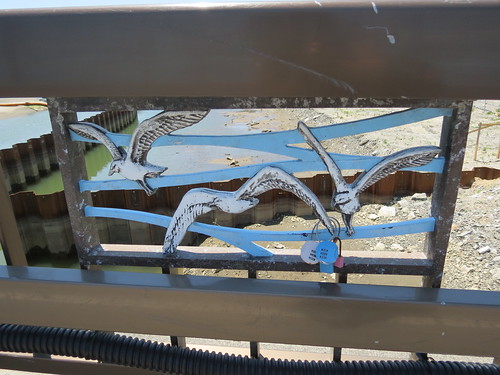 It was hard to know what to do when I reached the tree, so I just sat and stared at it for a while letting the thoughts flow through my head. 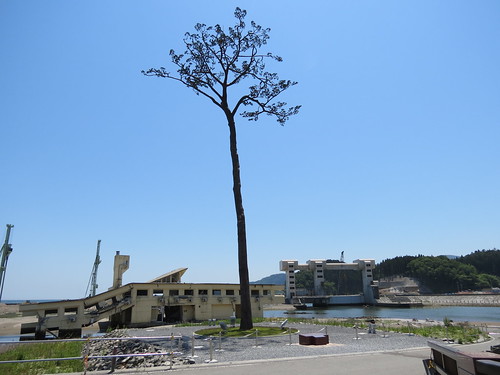 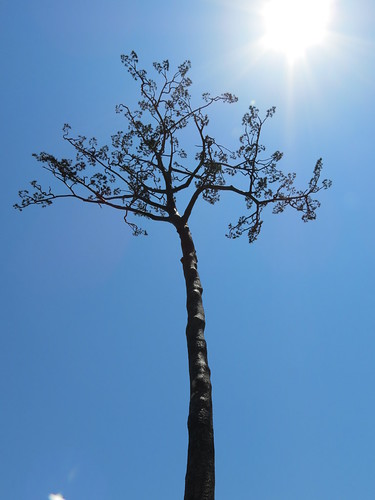 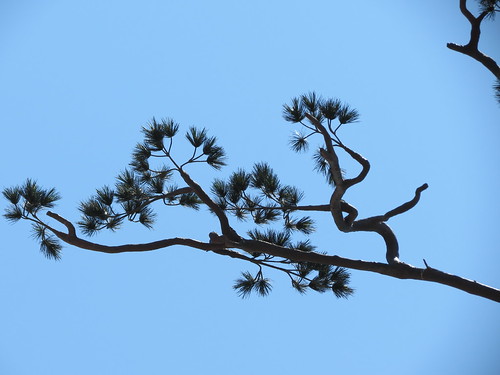 It was a beautiful day, and the water was so calm. 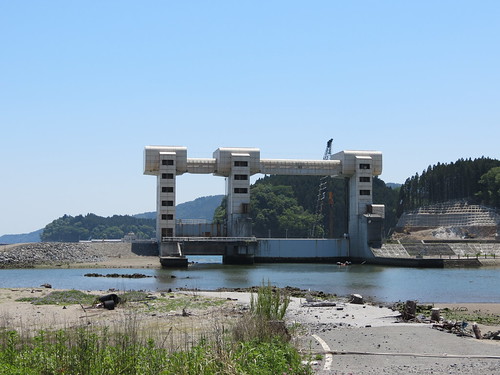 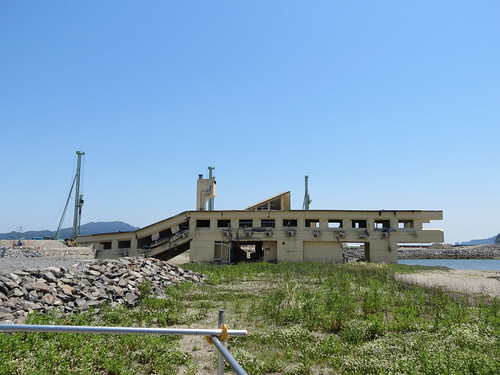 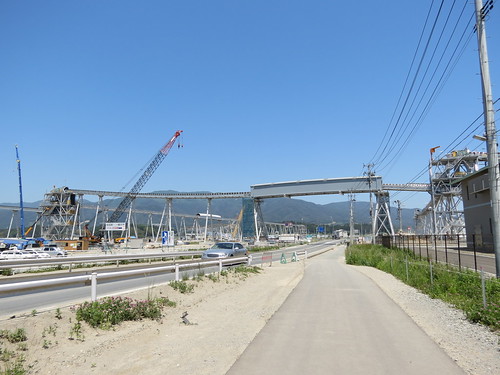 I made my way back to the cafe to collect my bag and buy some ice cream in return for the lady being so kind. Inside, the tiny cafe, Yagisawa Shoten (八木澤商店), was cosy and welcoming. 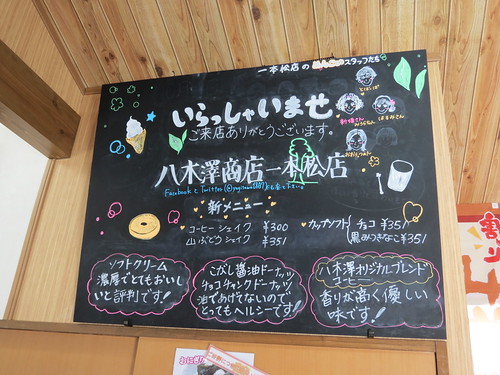 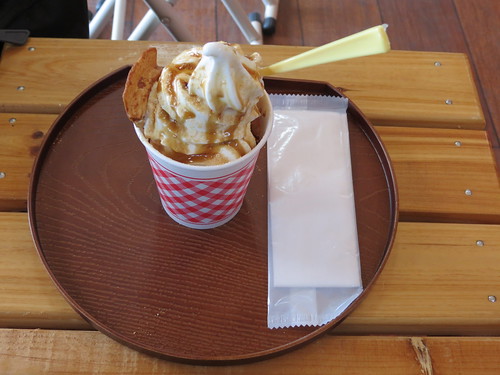 I was the only customer for most of the time I sat in the cafe. The lady working there decided to come and chat to me, and she showed me pictures of the shop as it used to be and the damage it had faced during the tsunami. Yagisawa Shoten is an established maker and seller of soy sauce and miso paste in Rikuzentakata, and was founded in 1807. They sell snacks, sweets, ice cream and cakes flavoured with soy sauce, miso, and other traditional Japanese ingredients. In May 2011 they were able to resume operations, determined to battle on and keep the business running despite nearly losing everything. There’s an interesting article about the business here on the Japan Times website. 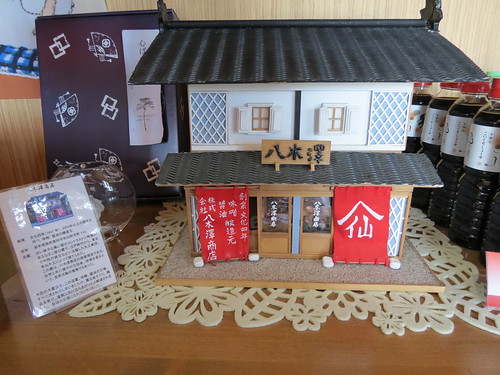 Yagisawa Shoten as it used to be…

Because of the lack of buses, I spent two hours in Rikuzentakata at Kiseki-no-ippon-matsu. There was really nothing to do there except for visiting the pine tree and eating ice cream at Yagisawa Shoten, but I’m grateful for the time I had. I’d go back if I could, just to sit in the cafe and chat with that lady with the incredible spirit.

My bus came along at 13:30 and I continued my journey to Kesennuma, and then onwards to Ichinoseki and finally Sendai. Unfortunately I didn’t have time to explore Kesennuma; trains were only every couple of hours and I didn’t want to delay myself too much. From what little I saw it looked interesting though, and I’d certainly be keen to come back and explore this area some more. I also would have liked to have travelled as far as Ishinomaki (石巻), but time just didn’t allow.

Finally I came to Sendai – a big, slightly nondescript city, which I quite liked. It reminded me a little of Nagoya, and I thought it would probably be quite a pleasant place to live. I’m glad I made the journey down the Sanriku Coast – it was long, and it was hard to see some of the areas that had been badly hit by the tsunami, but it made me grateful for what I have, and glad to see the がんばろう (ganbarou) spirit (the ‘let’s persevere abd do our best’ spirit) surviving throughout Tohoku. 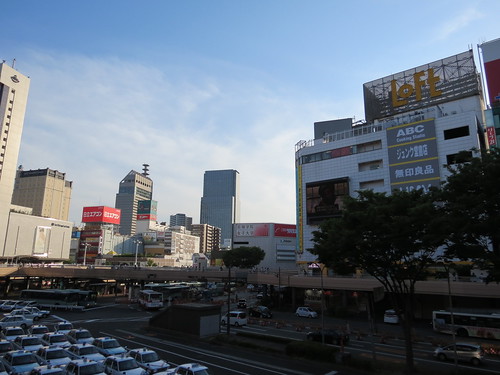 Sendai – back to the city

3 thoughts on “Japan 2014: A Journey from Kamaishi to Sendai”