“Early the next morning, we visited Shiogama Shrine, rebuilt by Masamune, Lord of Date, when he was governor of the province. The fine wooden pillars were of impressive girth, and the rafter beams were brightly painted. The shrine was at the top of a long flight of stone steps, and its vermilion lacquered fence was brilliant in the morning sunlight. How wonderful it is in this land of ours, I thought, that even in remote and unfrequented places such as this, the divine power of god is omnipresent.” – Matsuo Basho (translated by Dorothy Britton)

Like Basho so many years before, I started my morning with a visit to Shiogama (塩釜). It was June 4th, so a little earlier in the year than Basho would have been in the area (he arrived in Sendai on 21st June 1689, so would have been in Shiogama shortly afterwards), and I was on my way to Matsushima(松島) for a day trip from Sendai. I read that it was pretty neat to arrive into Matsushima by boat, so I decided to follow the suggestions I read and take the train from Sendai to Hon-Shiogama (本塩釜), where it’s possible to take a boat from the harbour into Matsushima Bay.

Shiogama Shrine (鹽竈神社), which I decided to stop off and visit before moving on to Matsushima, was indeed at the top of a long flight of stone steps (over 200, in fact). 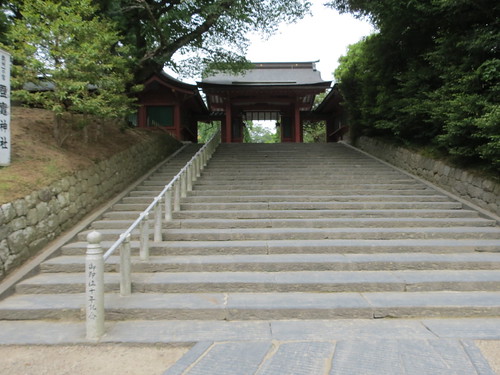 And, despite the lack of bright sunlight to highlight the colour, the shrine was exactly as Basho described: vermilion. 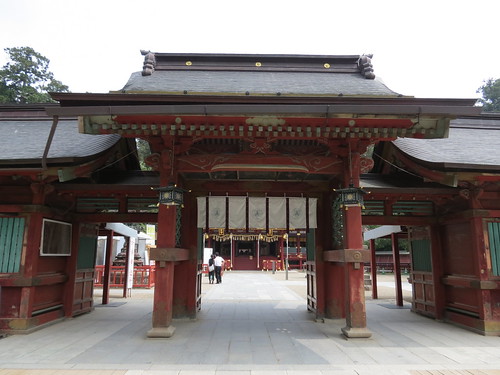 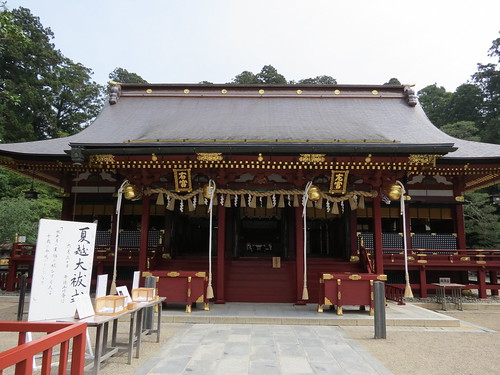 Shrines in Japan come in all sorts of shapes and sizes, but this one was a pleasingly brightly decorated one, and I was glad to visit it. 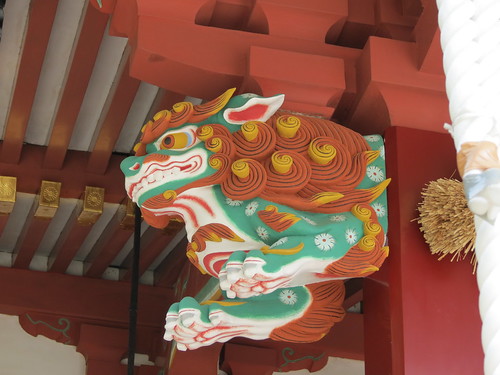 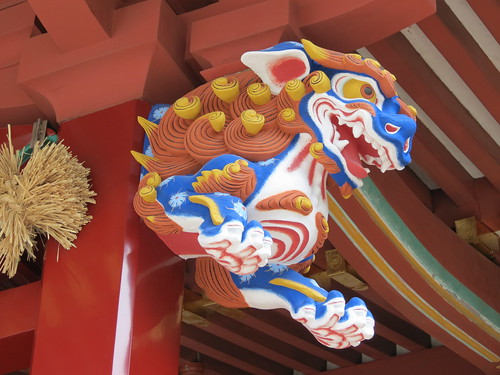 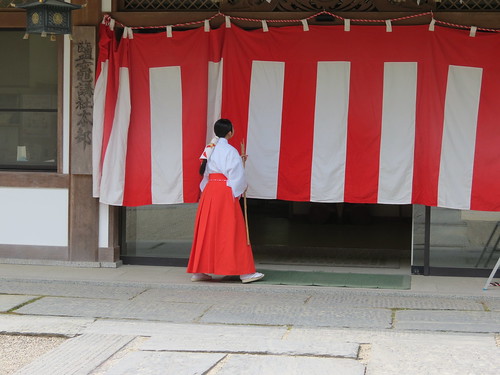 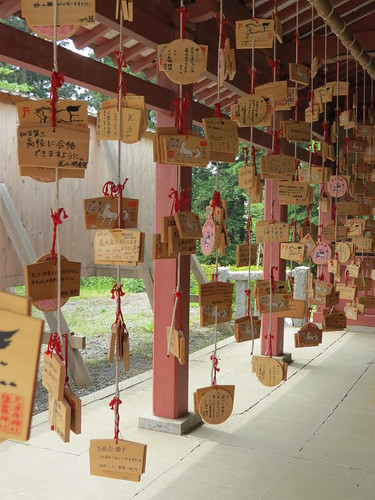 Ema – wooden plaques with wishes and prayers written on them 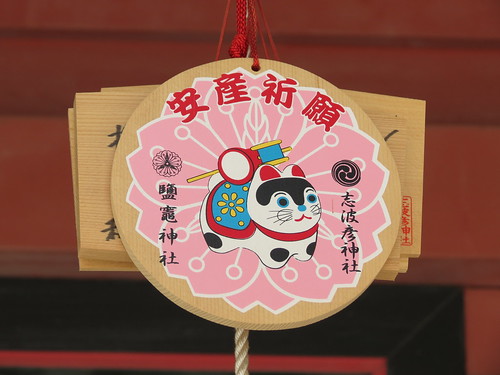 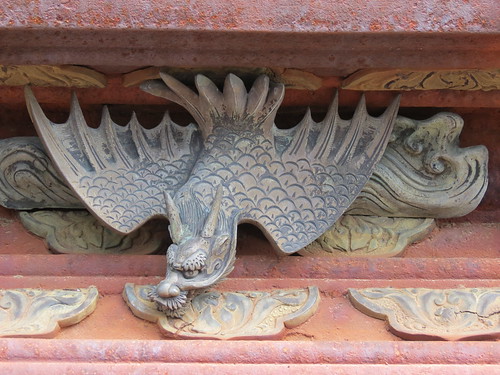 In the shrine’s grounds was a lovely traditional garden, which would be beautiful in the spring as it’s filled with cherry trees. Due to the different varieties of cherry trees planted in the garden, it is actually possible to see cherry blossom there from April to early May, which is an unusually long period. 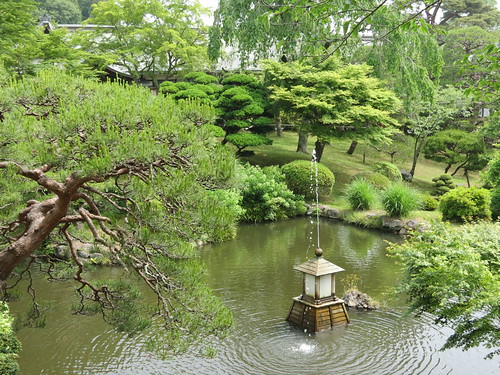 There was also a great view, despite the misty weather: 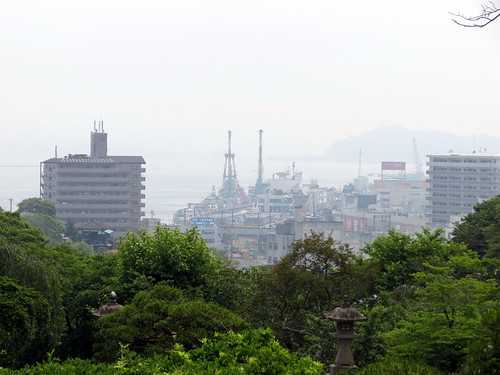 Shiogama Shrine, which is believed to be over 1,200 years old, is one of the most important shrines in the area. It is known as the protector of fishermen and safe childbirth, so local people will come to the shrine to specifically pray for those things as well as general luck and health. 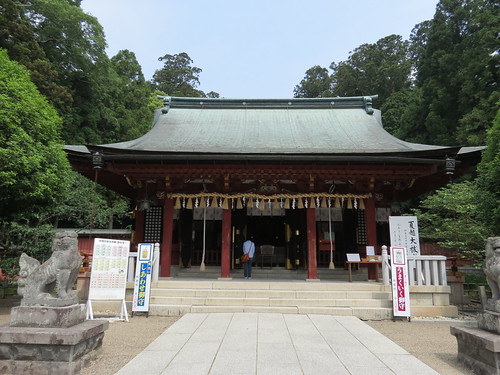 “In front of this Shinto shrine was an old stone lantern. On its metal casement were the words ‘Donated by Izumi-no-Saburo in the Third Year of Bunji [1187].’ Five hundred years ago, I marvelled! Saburo of Izumi combined the virtues of bravery, integrity, loyalty, and love for his parents. There is no person today who does not revere that glorious name. Truly it has been said: ‘To him who walks a straight path, true to what he feels is right, honors will come in due time.'” – Matsuo Basho (translated by Dorothy Britton) 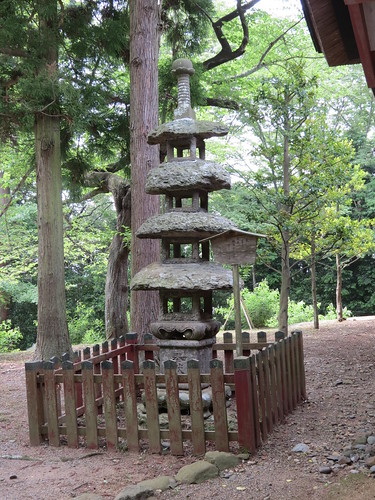 An old stone lantern – possibly the one referred to above

Shiogama Shrine was a delightful stop on my way to Matsushima… and there will be more about that coming very soon!