And so I returned to Tokyo. It was my third stay in Tokyo in the space of a month, and whilst I could have simply returned to one of the hotels I had stayed in previously, I was determined to find something new and something a little bit different.

Across Japan, various hotels have special character rooms, and I thought it would be lots of fun to stay in one of those. They’re not that easy to book though, even when you’re in the business! After a lot of searching, I came across a hotel that had one very special character room and a hint of character throughout the rest of the hotel: Lotte City Hotel Kinshicho. 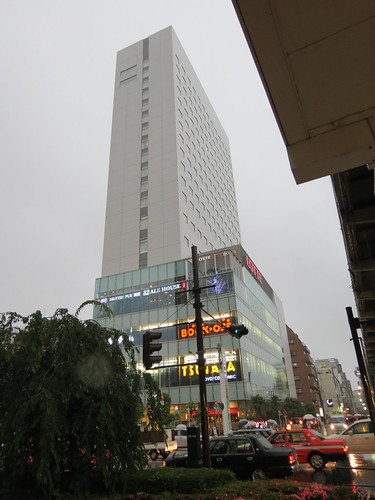 Lotte City – not so much character from the outside

Lotte is a multinational food and shopping corporation with headquarters in South Korea and Japan. They are probably most well known for their ‘Koala’s March‘ koala shaped biscuits filled with chocolate, strawberry or creamy milk fillings.

Lotte also produce quite a lot of other sweets and snacks, including various types of chewing gum; chocolate such as Ghana, Crunky, Rummy and Toppo; candy; biscuits; and ice cream. If you go into a convenience store in Japan you’ll be sure to see some of these.

A selection of Lotte products

The name ‘Lotte’ comes from the girl’s name ‘Charlotte’. The particular Charlotte referred to is the heroine in the novel The Sorrows of Young Werther by German author Johann Wolfgang von Goethe. Lotte’s tagline is “The sweetheart of your mouth, Lotte” (お口の恋人,ロッテ), which according to their English website is “based on the eternal love of Charlotte that resides deep in the hearts of so many people around the world“. Erm… ok!

Anyway, quirky taglines aside, their chocolate is great! And the Lotte City Hotel Kinshicho was no disappointment either!

My room, a ‘Longsofa Twin’ with what would have been a wonderful Skytree view if the weather hadn’t been so bad, was a decent size and very modern. 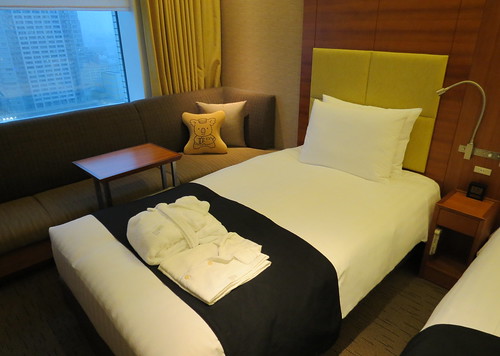 A nice room at the Lotte City Hotel Kinshicho

…I was happy with my room’s koala cushion (these were of course on sale in the hotel’s gift shop, but at just under ￥6,000 (about £33) even I couldn’t bring myself to splash out on something so frivolous). 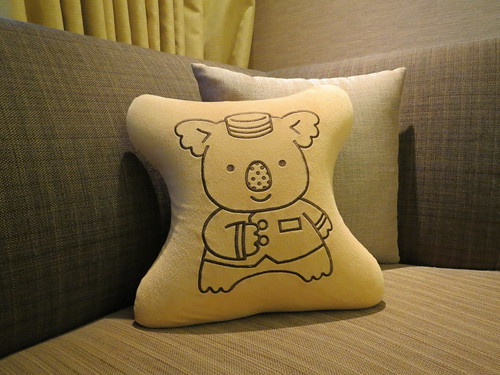 The fridge in the room came with complimentary Lotte chocolates: 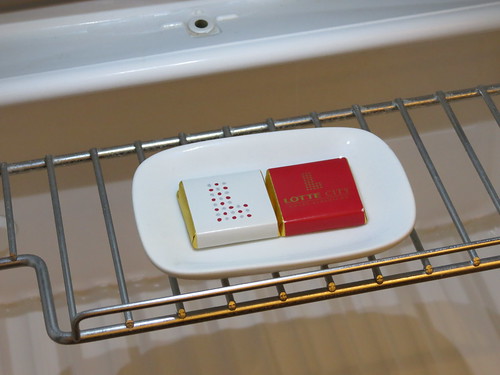 Free chocolate is the best kind of chocolate!

And the maid was apparently a koala too… 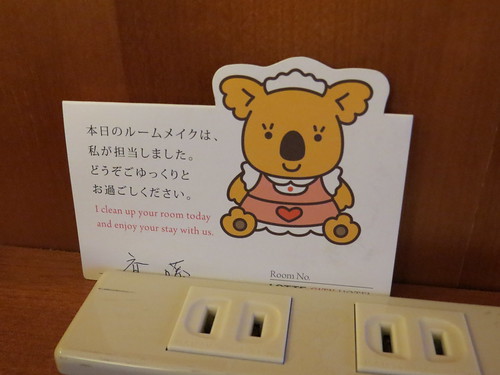 The room was delightful, and the only slight let down was the spoilt view: 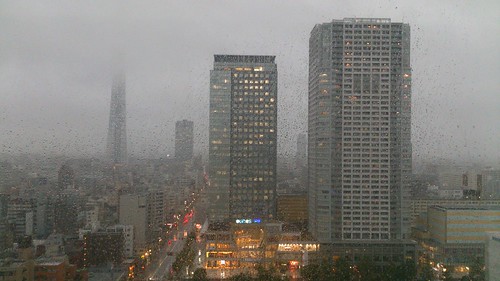 If only we could control the weather…

Kinshicho (錦糸町), in Tokyo’s Sumida Ward (墨田区), is a great part of Tokyo, with lots of shops and restaurants, but I had no need to leave the hotel that night. On the ground floor of the hotel building (which also houses a convenience store, a ‘British’ pub, Japanese book shop, English language school, Korean restaurant and an ale house) is a wonderful place: Charlotte Chocolate Factory (シャルロッテチョコレートファクトリー). Charlotte Chocolate Factory serves meals such as pasta, curry rice, and pizza but the main attraction is the desserts. 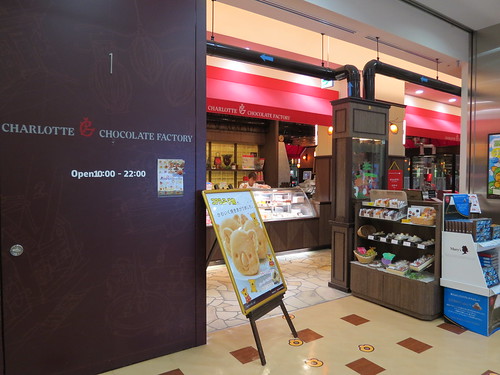 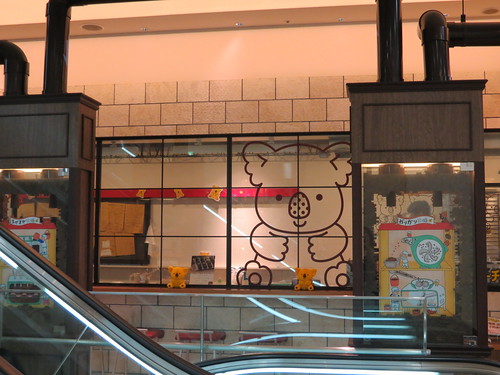 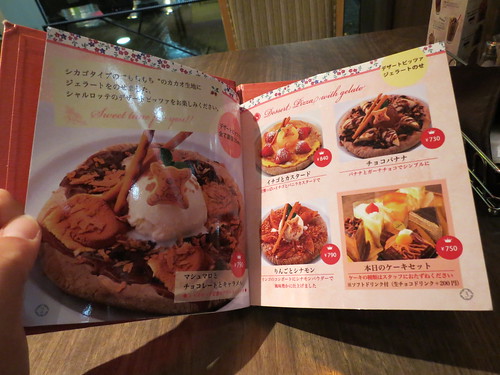 I decided to have a chocolate pizza, which came with a koala biscuit and Toppo! 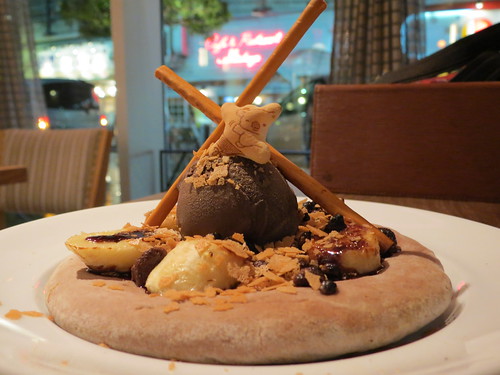 The following night I visited the cafe again with a friend and tried the waffles: 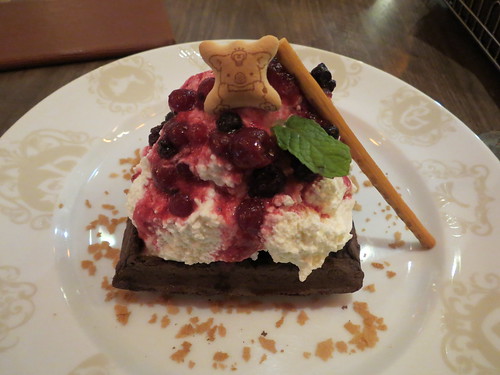 During the day and evening the cafe is open to the public, and there is a shop selling koala pancakes (like dorayaki) filled with anko (red beans) and a variety of other things. 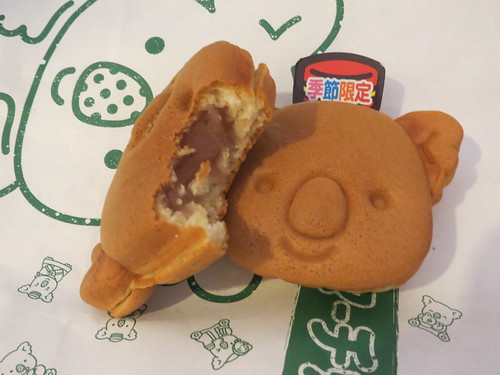 However, the best is still to come! In the mornings, the cafe is open for breakfast to the hotel’s customers, and it was the best buffet breakfast I had during my stay in Japan! As well as all the usual fare, both Western and Japanese, there were a few surprises… 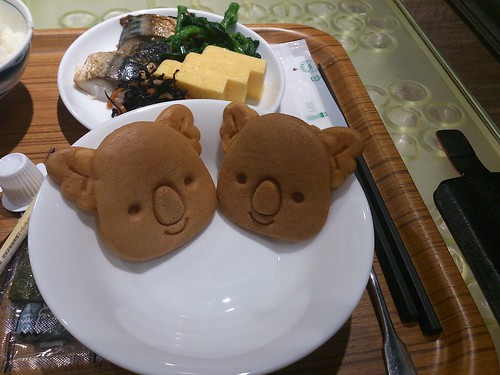 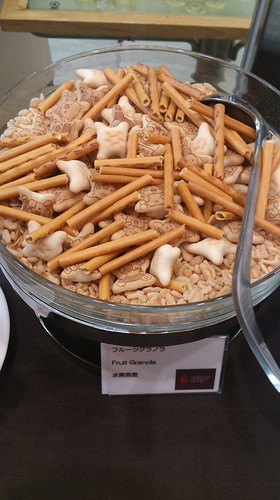 Toppo & koalas in the granola!

I stayed two nights and probably put on half a stone, but what a hotel! I stayed in 18 hotels during my month in Japan, and this was definitely one of my favourites. Not only was it quirky and fun, it was modern and very well located. This wasn’t, however, the last hotel of my trip… I spent my final night somewhere very special, but first I need to tell you about some of the fun things I did in and around Tokyo. We’re nearly there, folks! Thanks for bearing with me. ❤