On Thursday 5th June I made a ridiculous journey. It was the kind of journey that, as a travel professional, I would have advised my customers against… but I was determined to fit everything in! So, I travelled from Sendai to Toyama (富山). I left Sendai just after 9am and should have reached Toyama at just before 2pm (three trains later). However, due to high winds, one of my trains was delayed and I didn’t get to Toyama until just before 4pm! (>_<)

Delayed trains in Japan are big news, as everything usually runs like clockwork. However, I’ve heard that the particular route I was on is often subject to delays due to the train running right along the coast.

So, I spent an age sitting in the train in Itoigawa Station (糸魚川駅). Once I worked out what was going on (thanks to a nice lady slowly repeating the Japanese announcements to me in simplified Japanese) it wasn’t that bad really. After an hour of waiting, every person on the train was given some water and Calorie Mate biscuits to tide them over, along with sincere apologies from the train staff. You wouldn’t get treated like that here in the UK – you’d be lucky to get a sorry! 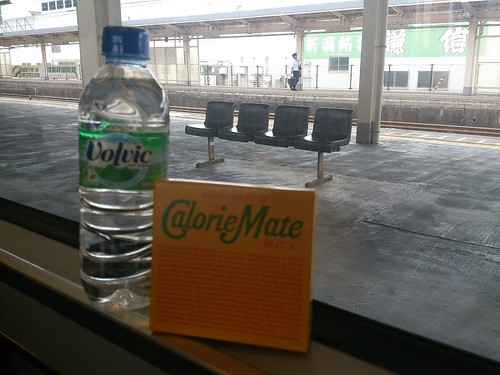 Water and calorie Mate in Itoigawa – miles ahead of the UK in terms of customer service!

Eventually we were on our way again, and I caught a glimpse of this beautiful coast that had been causing so many problems. 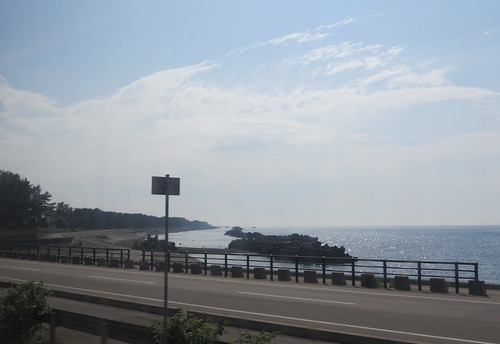 Beautiful coastline between Itoigawa and Toyama

I was meeting my friend in Toyama, and was incredibly grateful to see her face after my long journey! It was my first time to visit Toyama, and it wouldn’t have been on my itinerary if I hadn’t had a friend to see there, but I’m really glad I went. Toyama doesn’t have many tourist attractions, but my friend lives in the shadow of the Northern Japan Alps and the view is gorgeous! 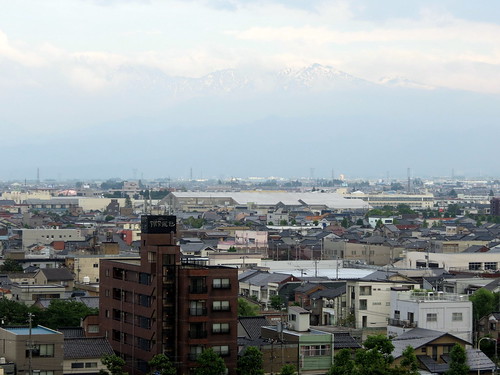 View of the Northern Japan Alps

That evening we went out for dinner at a local kaitenzushi (conveyor belt sushi) restaurant. I was so glad to have the chance to visit a kaitenzushi during my trip! 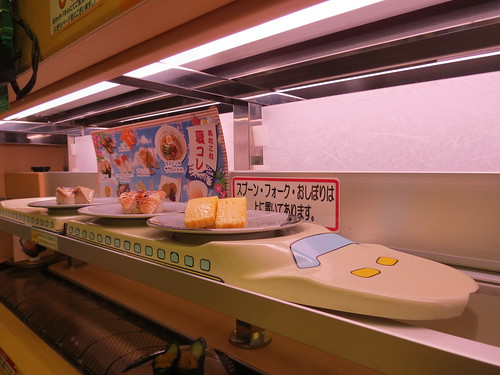 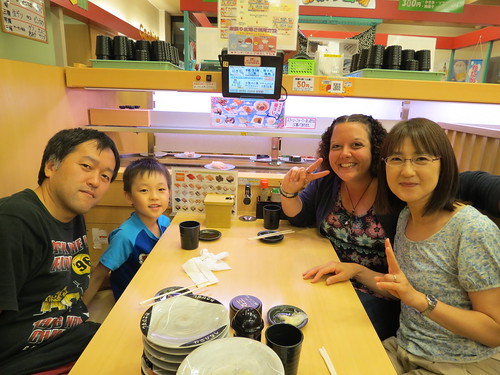 When I mentioned to a colleague at work that I was going to Toyama, knowing about my love for giant Buddhas, he said I really should visit the Takaoka Daibutsu (高岡大仏), so I arranged with my friend that we would squeeze that in the following day before I headed back to Tokyo. Takaoka (高岡) is not far from Toyama – just 12 minutes on the train.

Takaoka seemed like an interesting city, and I would like to have spent a little more time there exploring. But, time was limited, so we headed straight for the Daibutsu.

The Daibutsu stood at the end of a small, pretty garden. 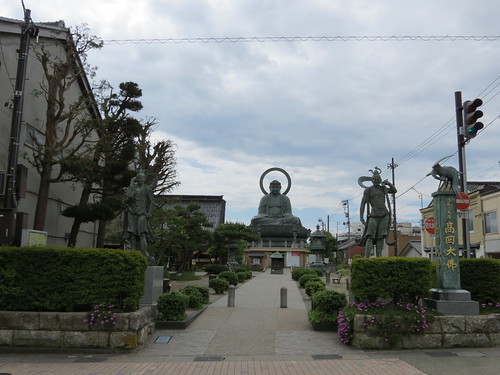 Guarded on either side! 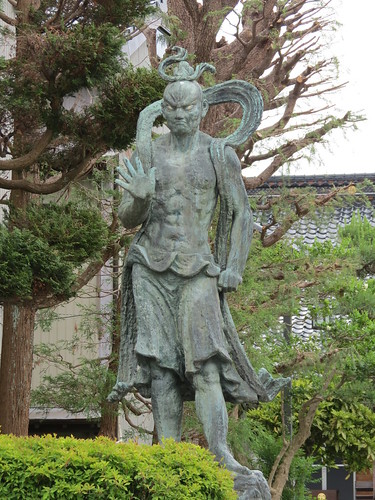 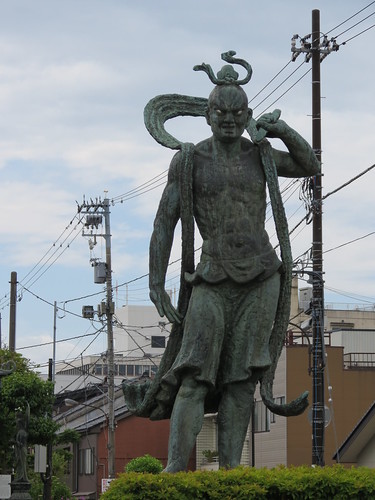 Is it me, or is this one a little bit camp?

The Takaoka Daibutsu is 15.85 metres high and weighs 65 tons. Although there are lots of Buddha statues in Japan, this is apparently one of the ‘three great images of Buddha’, along with those at Nara and Kamakura. The statue was originally built from wood in 1745 and, after destruction by fire, rebuilt in 1933 from copper. 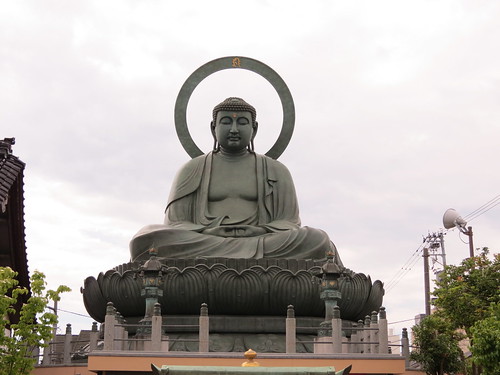 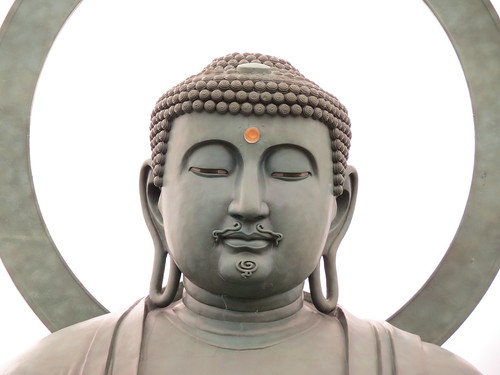 Inside the base of the statue there is a small collection of other statues and artefacts. 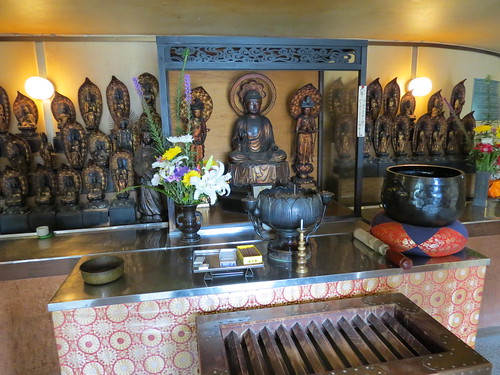 A place to pray… 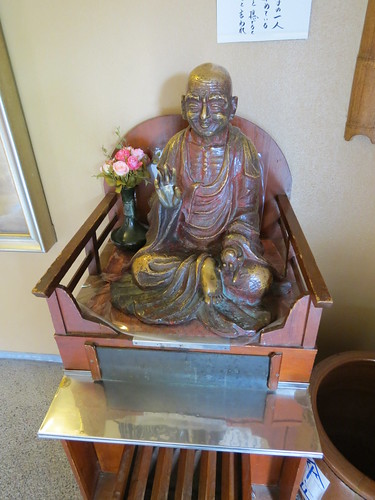 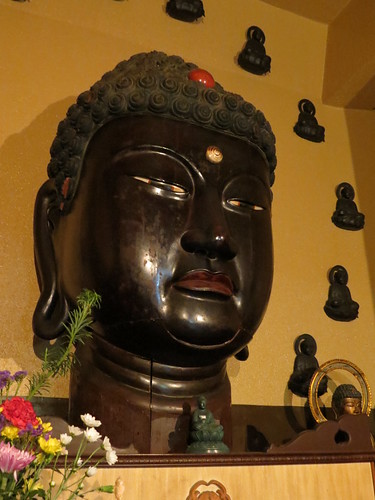 Buddhas inside the Buddha 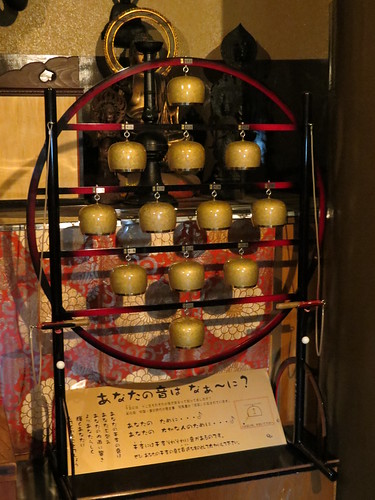 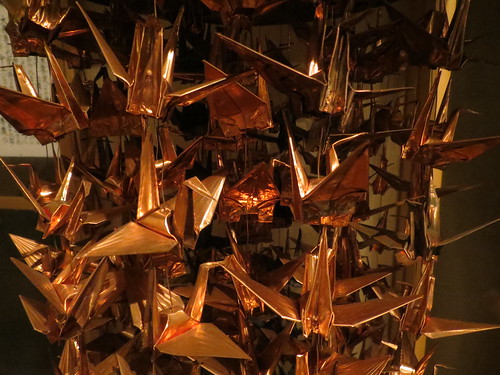 Takaoka is famous as the place where Fujio Fujiko (藤子不二雄) grew up and went to school. Fujio Fujiko is actually the pen name of a manga writing duo formed by two Japanese manga artists. Their real names are Hiroshi Fujimoto (藤本 弘)) and Motoo Abiko (安孫子 素雄). They are best known as the creators of Doraemon (ドラえもん). As we walked through the town we passed some cute Doraemon statues. 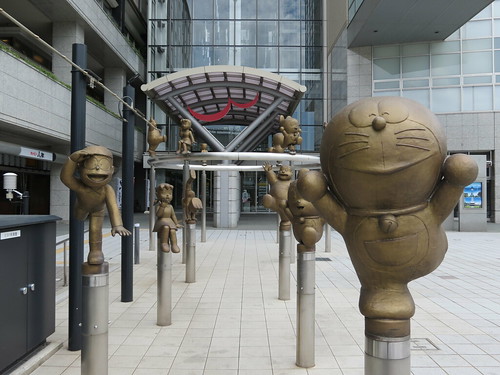 Takaoka Daibutsu is on the north side of Takaoka Station, and on the south side is Takaoka’s most famous temple: Zuiryuji (髄龍寺). It would have been rude to have come all this way and not paid the temple a visit, so off we ran! 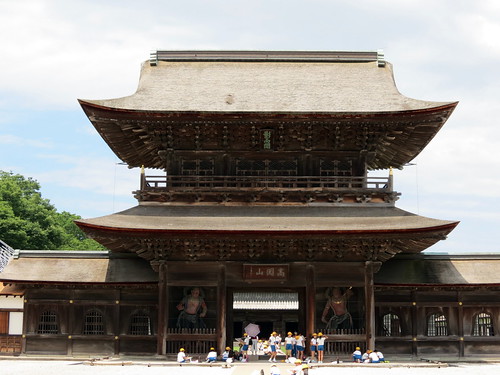 There happened to be a school trip there, which was quite amusing. All the kids were really polite and said hello to us, making sure to move out of our way as much as possible. Most of them were studiously drawing the temple’s buildings. 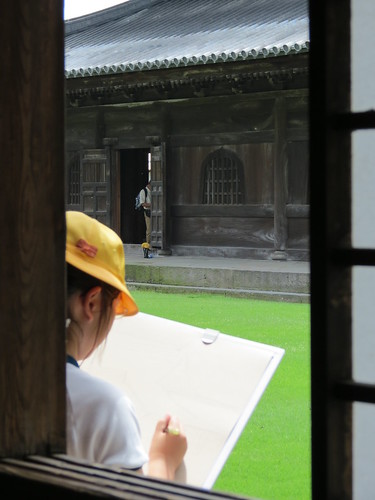 Zuiryuji, a National Treasure, is a Buddhist temple of the Soto sect. The ashes of Toshinaga Maeda (前田 利長), the second head of the Kaga Maeda family and founder of Takaoka, are enshrined there. 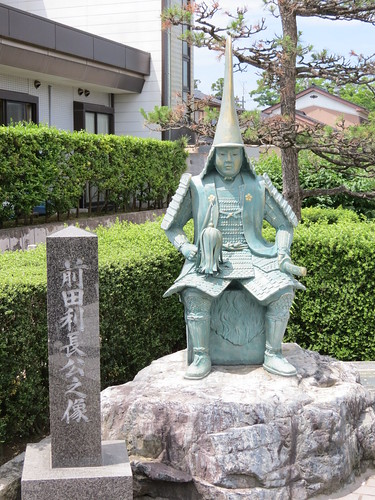 Zuiryuji and its grounds are beautiful, and there is a lot to see there. I’d definitely like to go back another time and explore the area at a more leisurely pace as I’m sure I missed a lot. 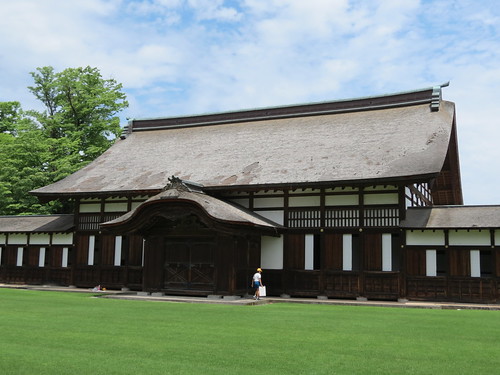 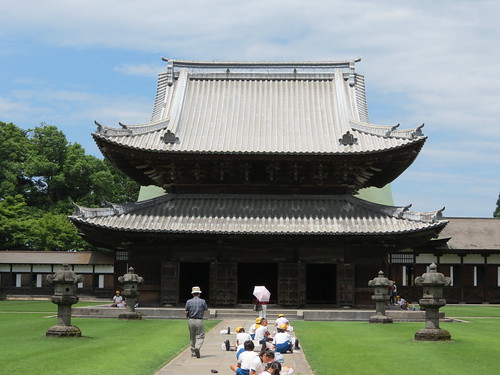 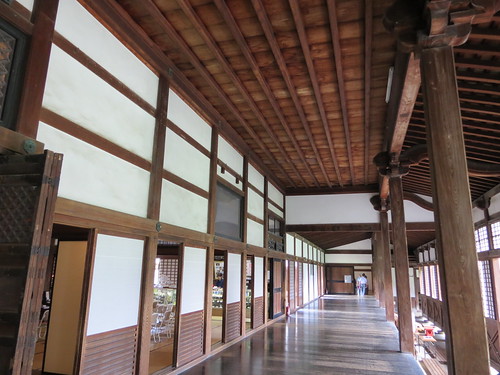 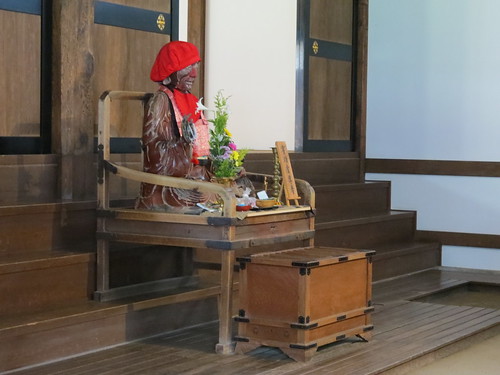 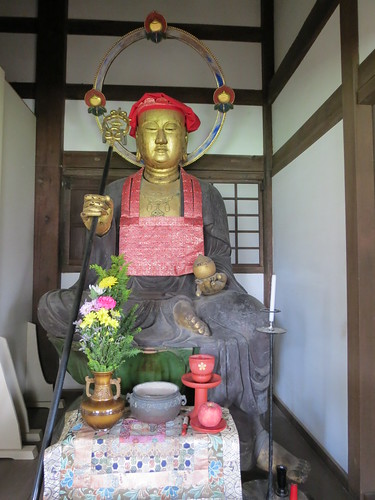 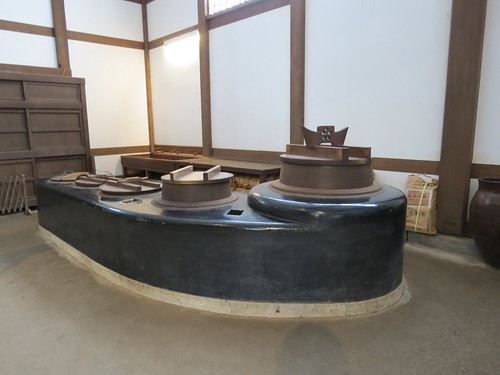 Sadly my time was up, and my friend and I dashed back to Toyama so I could continue my journey to Tokyo. It was with a slightly heavy heart that I left Toyama and Takaoka behind, feeling that I should have spent more time there. I’ll certainly go back again, though! 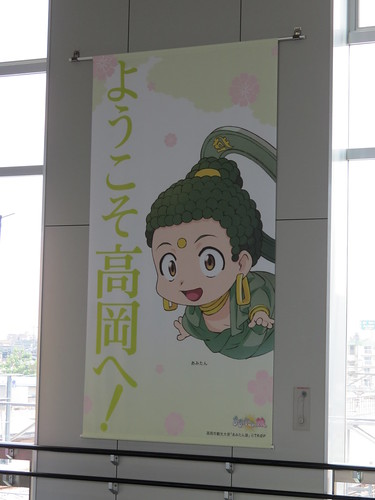