I think I owe Fran Pickering a public apology for having her book, The Haiku Murder, for such a long time and only just getting around to posting a review. Sorry Fran! I actually finished reading this page-turner before Christmas, but you know how time flies!

Here’s a synopsis of The Haiku Murder, the latest in Fran Pickering’s ‘Josie Clark in Japan‘ mystery series:

A haiku-writing trip turns to tragedy when a charismatic financier falls from the top of Matsuyama castle. But was he pushed? Expat Londoner Josie Clark thinks he was, and that’s when the trouble starts.

Josie’s life start to spin off the rails as she learns more than she expected about what the people who work for Ando Investments are really up to. Will her romantic Christmas Eve with English boyfriend Dave survive a mad chase around hidden Tokyo? And will she find the victim’s missing bag and its mysteriously valuable contents before more people die? Who’d have thought poetry could be so dangerous!

I’ve got to confess I’m not much of a murder mystery reader, but I love a book set in Japan and of course I’m interested in haiku (俳句), so I had to read this book! I enjoyed the last book in the series, The Cherry Blossom Murder, and was pleased to find The Haiku Murder was similar in style, and just as readable.

What I liked best about The Haiku Murder was the setting. The murder itself happens during a haiku writing trip to Matsuyama (松山) in Shikoku, famous for its castle. Although I’ve never been to Matsuyama (or Shikoku for that matter), Fran set the scene so well that I could imagine the setting and picture Matsuyama in lots of detail. Matsuyama Castle is one of Japan’s twelve ‘original’ castles (i.e. castles that have survived since 1868 intact).

“Matsuyama castle was perched on a hill overlooking the town. Josie had already seen it in the distance a number of times but wasn’t prepared for how high up it was when you stood at the bottom looking up. […] Below them Matsuyama basked in the autumn sunshine, and on the distant mountains the shimmering golden-bronze leaves looked like a Van Gogh painting. The air was clear and everything had a glow about it.” 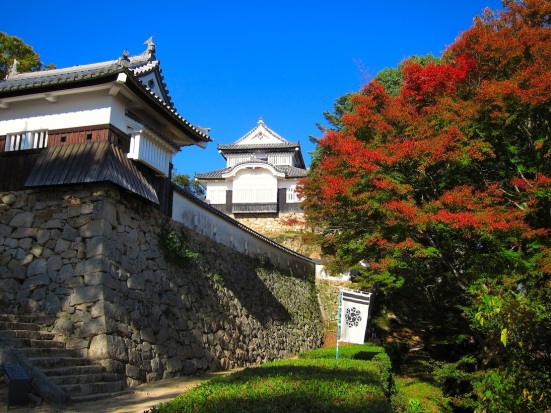 Part of the story revolved around collecting old books, and the other setting I found particularly interesting was the book shop and storage area described as being in Jimbocho (神保町) in Tokyo. Jimbocho is famous for its used book stores and publishing houses, so it was an obvious choice for ‘Shimizu’s Books’, the fictitious shop in which Josie meets up with Mr Mori just over halfway through The Haiku Murder. By this point Josie is hot on the trail of the murderer and looking for clues!

“Shimizu’s Books was housed in a building that seemed to have been left behind by the nineteenth century. It was built of warm red brick, three stories high and the width of two shopfronts, and it was topped with a classical pediment that wouldn’t have looked out of place on the Parthenon. The windows were, inevitably, stacked floor to ceiling with books; old, musty volumes with titles in spidery writing that Josie struggled to read. Grey-haired men with studious expressions were riffling through dump bins outside.”

I really love the way Fran describes places. Although murder mysteries aren’t my number one choice of genre, and at times I wasn’t completely into the dialogue or the romantic side storyline in The Haiku Murder, I did really enjoy the descriptive parts. They felt true, and I could tell that Fran knew the places she was describing intimately, and had either done her research incredibly well or walked in Josie Clark’s footsteps for a long time.

The Haiku Murder was another fantastic book by Fran Pickering, and there are more to come! One the same day The Haiku Murder was released Fran also published a prequel novelette, The Tokyo Karaoke Murder, which is available as an ebook. I’ll be reviewing that here just as soon as I’ve read it! Also coming sometime soon will be the third novel in the Josie Clark in Japan series, The Bullet Train Murder. If that’s not enough and you still want more, check out franpickering.com for weekly Cherry Blossom Monday and Haiku Thursday posts, and Fran’s blog Sequins and Cherry Blossom for regular updates on Japanese related art and events in London.

2 thoughts on “Book Review: The Haiku Murder by Fran Pickering”