It’s time for ‘Japan by Prefecture‘ again! This is the series that aims to provide the highlights of each prefecture of Japan, along with my personal favourites and suggestions from readers. This week, we’re looking at Akita Prefecture (秋田県).

Akita is most famous for its Kanto Festival (竿燈まつり), which takes place from the 3rd to 6th August. Japan Australia mentioned in last week’s comments that “the long bamboo poles with paper lanterns used for the festival look amazing”, and indeed they do!

I was lucky enough to see the lanterns close up at Rokkonsai last year – they really are impressive. 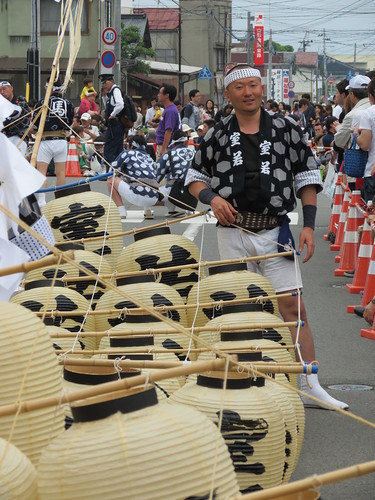 The Kanto Matsuri is a Tanabata (七夕) related celebration. Performers balance ‘kanto’ (long bamboo poles) on their shoulders, hands and even their heads. The poles are decorated with these paper lanterns (as many as 46 can be attached to one pole) and they are lit with real candles. Kanto poles come in different sizes with the largest measuring 12 metres and weighing 50 kilograms.

I’ve not been to Akita unfortunately, but Zooming Japan has, and she recommended visiting Kakunodate, especially in spring.

Kakunodate (角館) is a former castle town, featuring a samurai district and merchant district which are home to some beautiful examples of samurai architecture. Some of the samurai houses are open to the public and some of the merchant buildings have been converted into museums, shops and restaurants.

Unfortunately the castle no longer remains, but Kakunodate still looks like a really interesting place to visit. Around late April to early May is the best time to see the cherry blossom in Kakunodate, and around one million people will visit each year at this time!

I must also mention one of Tohoku’s top hot spring towns: Nyuto Onsen (乳頭温泉). Nyuto Onsen is a collection of onsen ryokan in Akita Prefecture, and part of the Towada-Hachimantai National Park (十和田八幡平国立公園). Nyuto Onsen means ‘nipple hot spring’ – a name which comes from the shape of nearby Mount Nyuto rather than the milky appearance of the hot spring water, apparently. Nyuto Onsen has a history of over 300 years, and the most famous onsen there is Tsurunoyu Onsen which dates back to the Edo Period (1603 – 1867).

Finally, a beautiful spot to visit near Nyuto Onsen is Lake Tazawa (田沢湖). Lake Tazawa (or ‘Tazawa’ko’) is a caldera lake or crater lake just south of the Towada-Hachimantai National Park. Lake Tazawa is similar to Lake Towada, but smaller and deeper. Actually, it’s Japan’s deepest lake at a depth of 423 metres.

Akita Prefecture doesn’t seem to have that many famous souvenirs (or ‘omiyage’ / おみやげ), but there is one product which has made a name for itself: Inaniwa Udon (稲庭うどん). These dry wheat noodles originated in Inakawamachi at the beginning of the Edo period. Wheat noodles are usually very thick, but these noodles are thin and stretchy.

Next week I will be writing about Yamagata (山形県). Have you been there? What’s good to eat there and what omiyage should I buy? What are the best sightseeing spots or hidden gems? Please do share your thoughts below, and join me next week for Japan by Prefecture!