It’s time for ‘Japan by Prefecture‘ again! This is the series that aims to provide the highlights of each prefecture of Japan, along with my personal favourites and suggestions from readers. This week, we’re looking at Yamagata Prefecture (山形県).

Yamagata Prefecture is part of the Tohoku region (東北地方) in northern Honshu, and its capital city is Yamagata City (山形市 ). I was lucky enough to visit Yamagata for a couple of nights last year, taking in a festival and one of Yamagata’s most famous attractions: Yamadera (山寺).

As mentioned by everyone who commented last week (Uncovering Japan, Japan Australia and Zooming Japan) Yamadera, or the ‘MountainTemple’, is one of the highlights of Yamagata Prefecture. Yamadera is a complex of temples built into the mountainside. It’s a very spiritual place, and utterly wonderful! Yamadera is a great place for autumn leaf viewing, and for getting away from it all and contemplating life whilst you climb up about 1,000 steps. It is also famous as a place where the haiku poet Matsuo Basho (松尾 芭蕉) went, during his ‘Narrow Road to the North’ (Oku no hosomichi / 奥の細道) pilgrimage.

If you like sacred mountain spots, Yamagata really is the place to go. As well as Yamadera, Yamagata has an area called Dewa Sanzan (出羽三山), which is the ‘three sacred mountains of Dewa’. Dewa Sanzan is the centre of Shugendo (修験道), a folk religion based on mountain worship which blends Buddhist and Shinto traditions. The three mountains are named Mount Haguro (羽黒山) which represents birth, Mount Gassan (月山) which represents death, and Mount Yudono (湯殿山) which represents rebirth. of the three mountains, Mount Haguro is probably the most well-known and the easiest to visit. It is even possible to stay in temple lodgings there overnight.

Mount Haguro is very high on my list of places to visit one day – it looks absolutely spectacular and very spiritual. There is a walking trail which leads to the top through a cedar forest, and there are over 2,446 stone steps to climb. The pagoda above is not far into the walking trail, and is said to have been built in the year 937.

Talking of hot springs, one final attraction I would like to mention in Yamagata Prefecture is Ginzan Onsen (銀山温泉). Ginazan Onsen, or ‘Silver Mountain Hot Spring’, is up in the mountains of Yamagata Prefecture and is known as one of Japan’s prettiest onsen towns. A river runs through the town, and traditional inns line the streets. I imagine in the evenings the town is full of the clip-clopping sound of visitors in their yukata robes walking from onsen to onsen in their wooden geta shoes.

I couldn’t write about Yamagata Prefecture without mentioning what is now one of my favourite Japanese festivals: the Hanagasa Matsuri (花笠まつり). The Hanagasa Matsuri takes place from 5th – 7th August each year, which is in the same period as the other big festivals of Tohoku. In the festival troupes of dancers and beautifully decorated floats take to the streets. The dancers wear colourful costumes and dance with ‘hanagasa’ flower hats to the rhythm of taiko drums and the Hanagasa Ondo (花笠音頭) folk song, with the refrain “ha yassho makasho”. It is a harvest song, with the lyrics meaning ‘oh come here and see, the heads of rice have matured, and bow low with fruit’ (source). 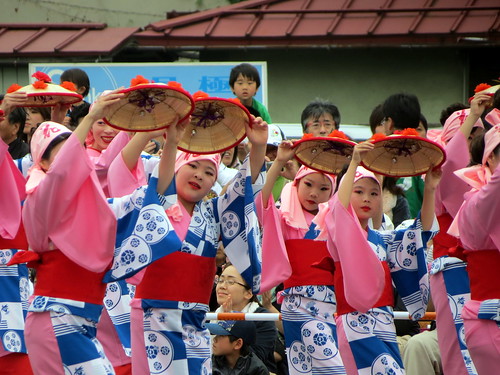 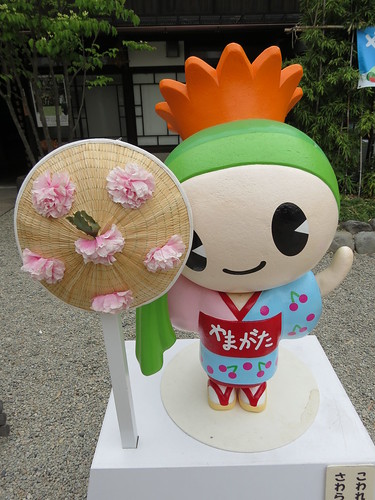 Yamagata Prefecture is most famous for cherries, so it follows that most of the souvenirs (or ‘omiyage’ / おみやげ) from Yamagata feature cherries. In fact, I remember when I was in Yamagata City noticing how many cherries and cherry products were on sale in the station area. Whilst researching for this blog post I was gutted to see there have been cherry flavoured Kit Kats from Yamagata – how did I not know this before, and did I miss them whilst I was there?! I’ll have to get some another time!

Next week I will be writing about Fukushima (福島県). Have you been there? What’s good to eat there and what omiyage should I buy? What are the best sightseeing spots or hidden gems? Please do share your thoughts below, and join me next week for Japan by Prefecture!