Kumiko The Treasure Hunter (トレジャーハンター・クミコ) (2014), starring Rinko Kikuchi (菊地 凛子), written by David and Nathan Zellner and directed by David Zellner, is an absolute masterpiece. See for yourself:

Kumiko The Treasure Hunter is a brilliantly quirky, highly original adventure film about a girl obsessed with finding the treasure she’s seen buried in the 1996 Coen Brothers film Fargo. The story depicted in Kumiko The Treasure Hunter is based on the urban legend surrounding the death of Takako Konishi who reportedly died trying to find the fictional treasure buried in the snow in Fargo in North Dakota in 2001.

In the film, 29 year old disillusioned office worker Kumiko is living a life in which she doesn’t fit in – she is not interested in her job or colleagues, she lives alone in Tokyo and eats instant ramen every night with her pet rabbit and she is single. Everyone around her is pressuring her to conform, to get married and to become a housewife and mother instead of an OL (Office Lady). It’s clear from her dishevelled appearance that she doesn’t fit the mould – even when she dresses for work in identical clothing to her colleagues she stands out as different. When she walks to work her bright red, hooded coat stands out against the black, formal clothing of everyone around her. Sadly this attitude that women of Kumiko’s age should conform is real, and there are still many women in Japan feeling this same pressure from family and friends around them.

Kumiko feeds noodles to Bunzo, her pet rabbit (which is ridiculously cute!)

Kumiko obsessively watches an old video tape of the film Fargo, replaying the scene where a large case of cash is buried in the snow and mapping out the exact location. When her dull life as an OL becomes too much to bear any more, she says goodbye to her noodle eating rabbit friend Bunzo, steals her boss’s credit card, and leaves Tokyo behind in to fulfil what she believes is her destiny – finding the treasure.

What ensues is a touching, funny, at times deeply sad, beautiful film about discovery and adventure. Kumiko battles through language barriers, money problems, and thick, thick snow in search of the treasure. She is confronted with the notion that the film Fargo is ‘fake’, but refuses to believe it. Kumiko meets all sorts of eccentric characters along the way – a born again travel guide (played by Nathan Zellner), a sheriff who is trying to figure out how to help (played by David Zellner), a lonely woman who wants to show Kumiko more interesting things than Fargo (such as the ‘Mall of America’), and a deaf taxi driver who writes messages on a board, and she battles on with her belief in the treasure despite everything and everyone that comes her way. 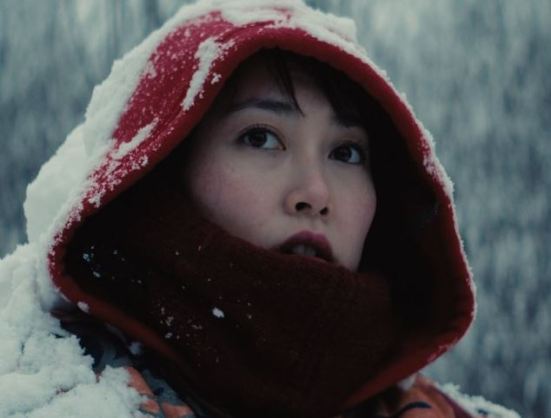 I adored this film, which is currently showing at the Watershed in Bristol. Rinko Kikuchi is, as always, utterly brilliant in her portrayal of this bizarre and totally loveable character, and the Zellner Brothers deserve to win awards for such an original and wonderful film. I won’t give away the ending, but I will say that it surprised me and encouraged me to suspend my belief. I’ve read some people’s reviews of this film online saying that they couldn’t understand the ending and that it made no sense, but to me it made perfect sense, and it was brilliant. You know a film is good when you want to watch every last moment of it at the cinema and then watch it all over again. Oh and, by the way, the soundtrack by The Octopus Project was fantastic!

Kumiko and Bunzo the rabbit

Find out more about Kumiko The Treasure Hunter on the official website: kumikothetreasurehunter.com and look out for the film in a cinema near you! (There’s no date for the UK DVD release on Amazon just yet…)

3 thoughts on “Kumiko The Treasure Hunter – A Zellner Bros. Adventure”