It’s time for ‘Japan by Prefecture‘ again! This is the series that aims to provide the highlights of each prefecture of Japan, along with my personal favourites and suggestions from readers. This week, we’re looking at Fukushima Prefecture (福島県).

Fukushima Prefecture is part of the Tohoku region (東北地方) in northern Honshu, and its capital city is Fukushima City (福島市). In 2011 Fukushima hit the news when the Tohoku earthquake and tsunami hit the region, causing nuclear accidents at the Fukushima Daiichi Nuclear Power Plant. Unfortunately this disaster has left Fukushima with a bit of a bad name, and it’s not exactly the number one destination on most people’s holiday itineraries.

However, Fukushima was never exactly a top tourist spot, and although there is still an exclusion zone in Fukushima Prefecture, the parts of the region that are worth visiting are open and ready to welcome tourists. This map from JapanGuide.com shows where the exclusion zone is in relation to the tourist spots, and also indicates levels of radiation throughout the prefecture.

So, why visit Fukushima? Well, as Japan Australia mentioned in last week’s comments, one of the top spots in Fukushima Prefecture is Aizu-Wakamatsu (会津若松). Aizu-Wakamatsu is a castle town, and its main attraction is Tsuruga Castle (鶴ヶ城) which was built in 1384. Unfortunately the castle is a reconstruction rather than one of the few originals, but it’s still pretty impressive and a must-see for anyone interested in samurai history.

Although not as well-known as some other natural spots in Japan, Fukushima Prefecture is home to the Bandai (磐梯) region and Oze National Park (尾瀬国立公園), both of which are excellent places to hike and enjoy the outdoors. The Bandai region centres around Mount Bandai, which is a volcano which last erupted in 1886. Also in Bandai is Mount Azuma-kofuji (吾妻小富士), or ‘Little Azuma Fuji’. Both the Bandai region and Oze National Park are great destinations for autumn leaves. If you want to see the colours at their absolute best, check out this post on Life to Reset.

Finally, here’s my claim to fame! I’m lucky enough to have actually met Fukushima’s mascot, Kibitan (キビタン), when he came to visit London in 2012. Kibitan started out as the mascot of the ’50th National Athletes Meet’ (Fukushima Kokutai) in 1995 and due to his popularity the yellow bird stuck around as Fukushima’s mascot. Apparently he has a wife named Kibimama, a daughter named Kibby and a son named Kibimaru. 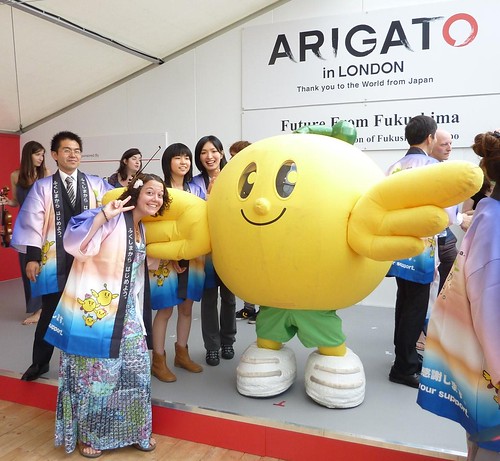 I don’t know of many souvenirs (or ‘omiyage’ / おみやげ) from Fukushima, but the area is famous for its peaches. In the picture below you can see some peach sweets in the top right and some delicious peach juice I tried last year in the bottom left. This juice is made from Fukushima Akatsuki peaches. Other souvenirs from the area include the Akabeko (赤べこ) (bottom right and back of top left), the nodding red cow, and the Okiagari-koboshi (起き上がり小法師) (top left), the ‘getting-up little priest’. The Okiagari-koboshi was particularly popular after the 2011 disaster as it represents the idea of getting up after a fall.

Next week I will be writing about Ibaraki (茨城県). Have you been there? What’s good to eat there and what omiyage should I buy? What are the best sightseeing spots or hidden gems? Please do share your thoughts below, and join me next week for Japan by Prefecture!