It’s time for ‘Japan by Prefecture‘ again! This is the series that aims to provide the highlights of each prefecture of Japan, along with my personal favourites and suggestions from readers. This week, we’re looking at Nagano (長野県).

Nagano Prefecture is part of the Chubu Region (中部地方) and the capital is Nagano City (長野市). I’ve actually been to a lot of Nagano’s highlights, including Nagano City (2011, 2014), Kamikochi (2014), Yamanouchi (2011), Jigokudani Monkey Park (2011, 2014), and Matsumoto (2014). But there are plenty more places worth visiting besides those! In fact, Nagano Prefecture has something to offer everyone, whatever the season. Hiking in the autumn leaves or summer sun, skiing and hot springs, cherry blossoms and castles… Nagano has it all! A big thank you goes to Zooming Japan, Japan Australia and Nathaniel for their suggestions for this week’s post. I may not have time to write about them all, but all of the ideas were appreciated.

My favourite place in Nagano Prefecture has to be Jigokudani Monkey Park (地獄谷野猿公苑). Jigokudani Monkey Park is located in Yamanouchi (山ノ内), which is a municipality in northern Nagano Prefecture. As well as the world-famous monkey park, Yamanouchi is also home to Shibu Onsen (渋温泉), Yudanaka Onsen (湯田中温泉), Kambayashi Onsen (上林温泉) and Shiga Kogen (志賀高原). When I first visited the monkey park in 2011 I stayed in Kambayashi Onsen in one of the onsen hotels closest to the monkey park, but it is also possible to visit as a day trip Nagano City, which is what I did in 2014.

Jigokudani Monkey Park is famous for its wild Japanese macaques, known as ‘snow monkeys’, which like to bathe in the hot springs there. Although the monkeys are wild and free to come and go as they please, there is a central man-made hot spring pool around which tourists gather hoping to see them, and the monkeys are encouraged to come down and bathe by wardens who throw food into the pool. The park is open all year round but if you want to see the monkeys at their best the optimum time to visit is around January/February. However, I went in March and May and both times I was not disappointed and managed to get some fantastic photos. 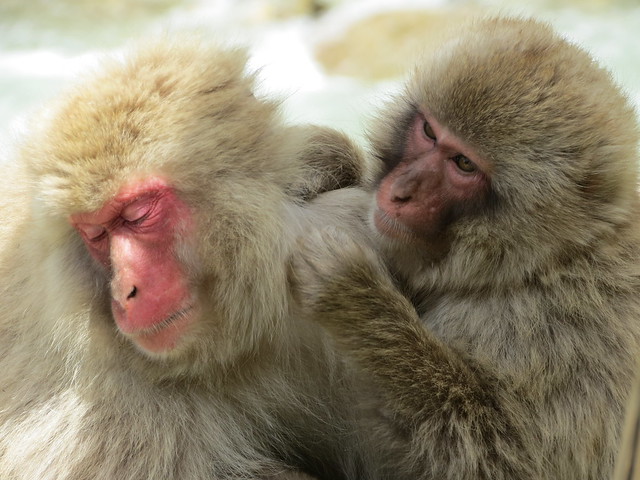 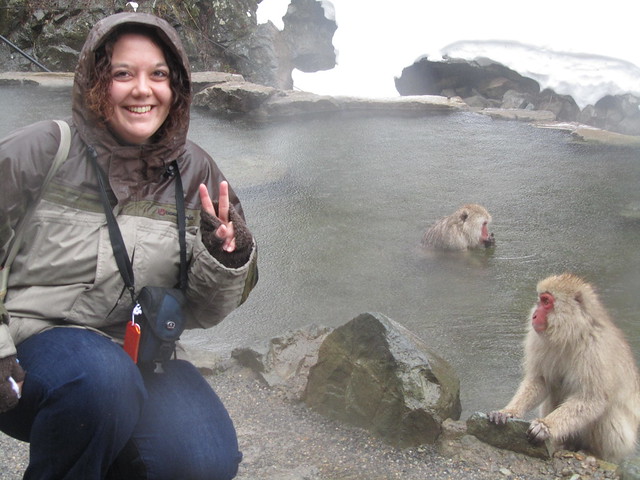 Shiga Kogen, mentioned above, is the largest ski area in Japan and was also host to some of the events during the 1998 Nagano Winter Olympics. Shiga Kogen is actually made up of 21 ski resorts that have joined together. With its location close to the monkey park and other attractions of Nagano City, Shiga Kogen is a good option for a combined ski and culture holiday, whereas most hardcore ski fans would visit Niseko in Hokkaido. The official ski season here is from mid-to-late November until the first week of May, but Christmas and New Year are the peak times to visit.

Another great option for skiing in Nagano Prefecture is Nozawa Onsen (野沢温泉). This is both a traditional onsen (hot spring) town and a ski resort, and it’s very charming if a little sleepy out of season.

The other very popular ski resort in this region is Hakuba (白馬). Hakuba hosted several events during the 1998 Nagano Winter Olympics, and today some of the Olympic facilities remain in use, such as the Hakuba Ski Jumping Stadium. I’ve never been skiing, but I think if I did I would like to go to Hakuba or Nozawa Onsen.

Moving away from the chilly winter scenes Nagano offers so well, many parts of Nagano Prefecture are also great for hiking in the warmer months. One of the tops spots for hiking, and one of my favourite places (so far) in all of Japan, is Kamikochi (上高地), which I visited for the first time last year. 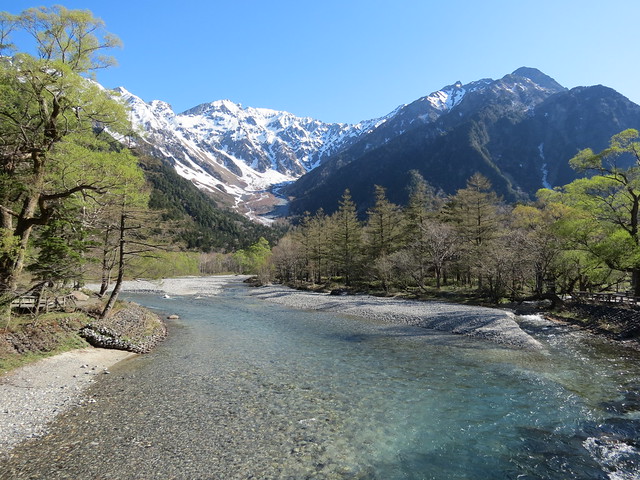 Kamikochi is just breathtakingly beautiful, and such a peaceful and relaxing place to hike. The plateau in the Azusa River Valley is surrounded by tall mountains, and is only open from mid-April to early November each year. Even when I visited in May there was snow on the mountains and at the sides of the roads. Even if you’re not massively into hiking, Kamikochi is still a fantastic place to visit. And, if you are really into hiking and mountain climbing, it’s absolutely brilliant! 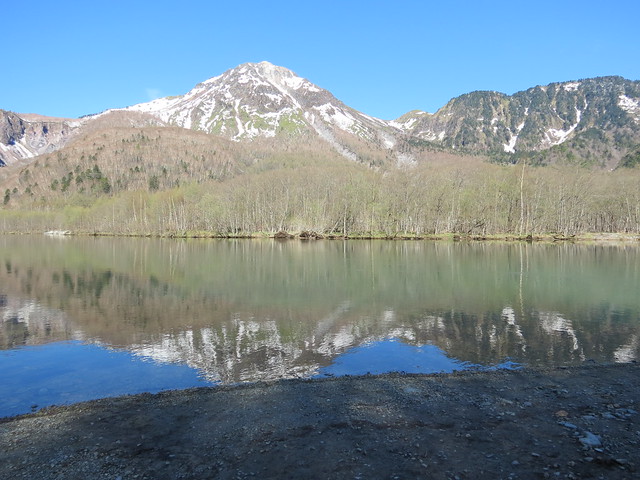 Another great place for hiking is the Kiso Valley (木曽路). The Kiso Valley, or ‘Kisoji’ in Japanese, was originally an ancient 70km trade route, and then in the Edo Period (1603 – 1868) this route joined with others in the area to form the 500km long Nakasendo (中山道). The Nakasendo, or ‘central mountain route’ was one of the two main ways in which people moved between Edo (Tokyo) and Kyoto, with the Tokaido (東海道) (‘East Sea Road’) being the other. Nowadays only parts of the old Nakasendo are walkable, with the 8km stretch between post towns Magome (馬籠) (in Gifu Prefecture) and Tsumago (妻籠) (Nagano Prefecture) being the most well-kept and restored part. Narai (奈良井) is also a well preserved post town on this route, and once marked the halfway point between Edo and Kyoto.

Most people arrive in Magome and hike to Tsumago, then stay the night there at one of the minshuku (family run bed and breakfasts). However, with Narai being the less-visited of these towns, it appeals to me the most and I would love to visit there one day. The main street in Narai contains souvenir shops, restaurants and restored houses, some of which are open to the public. Unfortunately vehicles are permitted in Narai, whereas they are not permitted in Magome and Tsumago.

I couldn’t write about Nagano Prefecture without mentioning Matsumoto (松本) – the city famous for its stunning original castle. I visited Matsumoto for the first time last year and was left with the feeling that there was a lot I didn’t see (and also that I should really have visited whilst I lived in Nagoya – it would have been so easy!). Matsumoto Castle (松本城) is a ‘hirajiro’ – a castle built on plains rather than a hill or mountain. Its black colour makes it iconic, and it is a pure symbol of Japanese beauty. 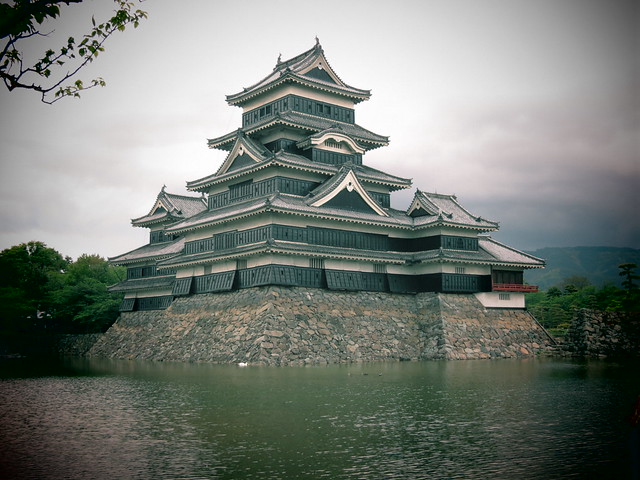 Matsumoto has more to offer than just the castle, though, and the town itself is definitely worth exploring. Also, nearby is a more rural attraction – the Daio Wasabi Farm (大王わさび農場) in Azumino City (安曇野市). I’ve not been here, but I’ve heard lots of good things about it. It is one of Japan’s largest wasabi farms, and not only is it set in a beautiful area which is good for hiking, it’s a great place to go if you like the nose-tingling taste of wasabi! You can get everything there from wasabi ice cream and chocolate to wasabi soba noodles and even wasabi beer!

Last, but by no means least, is Nagano City (長野) itself. I absolutely love Nagano, and have visited twice in 2011 and 2014. The main attraction in Nagano is Zenkoji (善光寺) – one of the most important and popular temples in Japan. Zenkoji was founded in the 7th century and is home to the first Buddhist statue ever to be brought into Japan. This statue is actually hidden, and a copy is shown to the public every six years for just a few weeks. In fact, today is the last day of one of those periods, so the next time the statue will be on display is 2021. 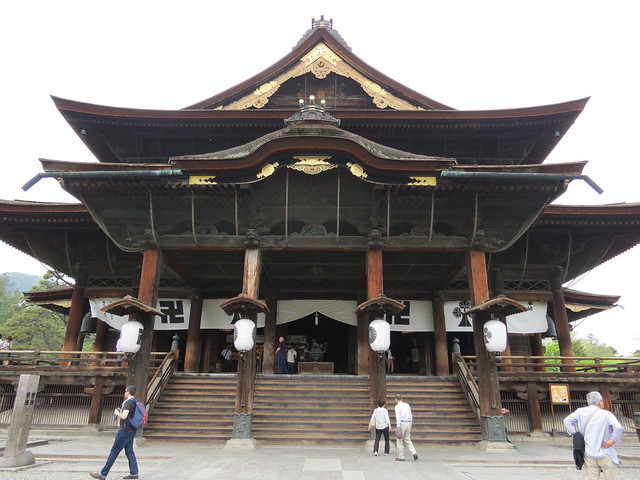 One of the things I love best about Zenkoji is all of the Buddhist statues you can find in the temple complex – there are lots, and each one different in some way. 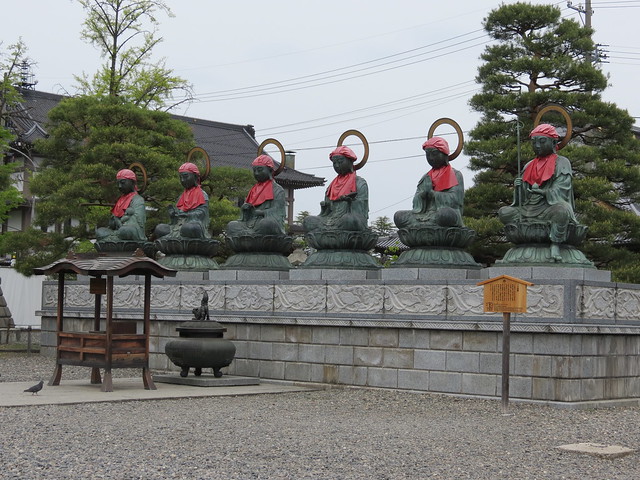 So, as you can see, Nagano Prefecture has a lot to offer! It’s easy to get to as well, with a bullet train line running directly from Tokyo. If you haven’t visited Nagano Prefecture yet, I recommend you add it to your list!

Apples are popular in Nagano Prefecture, so a lot of the souvenirs (or ‘omiyage’ / おみやげ) from this area will be apple flavoured. Naturally, that includes Kit Kats! There is also an ‘ichimi’ chilli Kit Kat from Nagano. Both the apple and the ichimi are labelled as being from Shinshu (信州), which is actually an old province of Japan and is now Nagano Prefecture. Nagano has a mascot called Arukuma. Apparently Arukuma loves to collect hats, and each one reflects one of Nagano’s many specialities, such as chestnut, persimmon, mushrooms or apples. His name comes from the words ‘aruku’ (to walk) and ‘kuma’ (bear). He’s pretty cute, and you’ll find him all over the souvenir shops. Another more traditional souvenir is ‘kuri kanoko’, which is a thick jellied chestnut dessert made from  sugar, chestnuts and agar agar. If you’d like a souvenir that isn’t edible, I’d recommend a ‘temari’ handball from Matsumoto. These pretty colourful crafts make beautiful decorations for the home. of course, with the wasabi farm near Matsumoto, wasabi-themed souvenirs are popular too!

Next week I will be writing about Gifu (岐阜県). Have you been there? What’s good to eat there and what omiyage should I buy? What are the best sightseeing spots or hidden gems? Please do share your thoughts below, and join me next week for Japan by Prefecture!