It’s time for ‘Japan by Prefecture‘ again! This is the series that aims to provide the highlights of each prefecture of Japan, along with my personal favourites and suggestions from readers. This week, we’re looking at Hiroshima (広島県).

Hiroshima Prefecture is part of the Chugoku Region (中国地方) and the capital is Hiroshima (広島市). When I first planned to visit Japan back in 2006 I nearly left Hiroshima (the city) off my list. It seemed too far, and I wasn’t really a history fan, so I didn’t see the point in going. But I was convinced that I would regret it if I didn’t go, and I’m so glad I went. I love Hiroshima, and have returned once since that first visit, in 2008. Actually, as I mentioned in last week’s post, there was a time when I hoped to move to Hiroshima, and I think I would have enjoyed living there. I’m very excited to be going back to Hiroshima City and to other parts of Hiroshima Prefecture later this year! Thanks to Artemis, Japan Australia and Paul for contributing to this week’s post with lots of great ideas!

So let’s start with Hiroshima (広島) itself. Everyone knows Hiroshima as a place devastated by the dropping of the first atomic bomb on 6th August 1945, but today there is more to Hiroshima than just this dark past. Of course, one of the main reasons people visit Hiroshima is for its history, and no visit to Hiroshima would be complete without seeing the Peace Memorial Park (平和記念公園) and A-Bomb Dome (原爆ドーム). The Peace Memorial Park is large and flat, and fits in well with Hiroshima’s calm, wide atmosphere. Everything in Hiroshima feels well laid out and the city has a much more spread out feeling than most other Japanese cities. I guess that’s what’s possible when a city has to start again and rebuild from scratch. As I said above, I wasn’t that keen on visiting the museum at the Peace Memorial Park on my first trip to Japan and I didn’t think I would get anything from it, but actually I’m really glad I did go and will probably go again this year (although the museum is currently undergoing renovations until spring 2016). 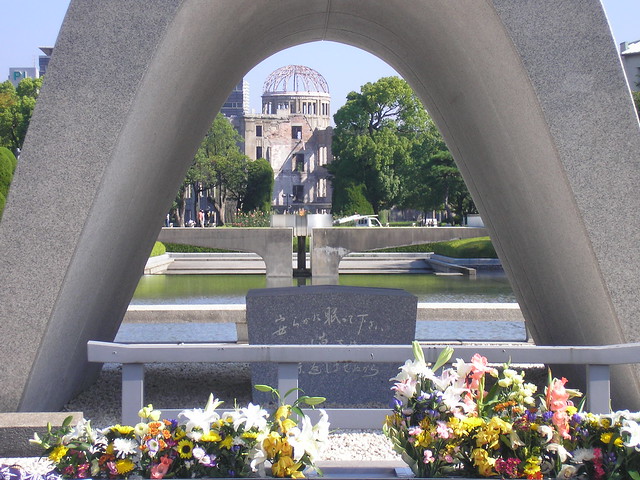 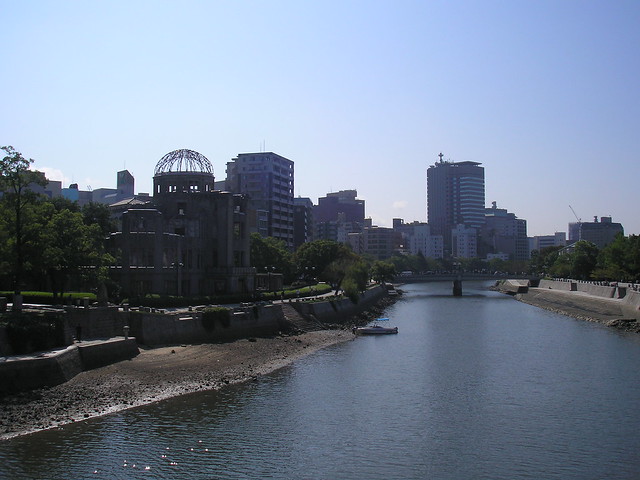 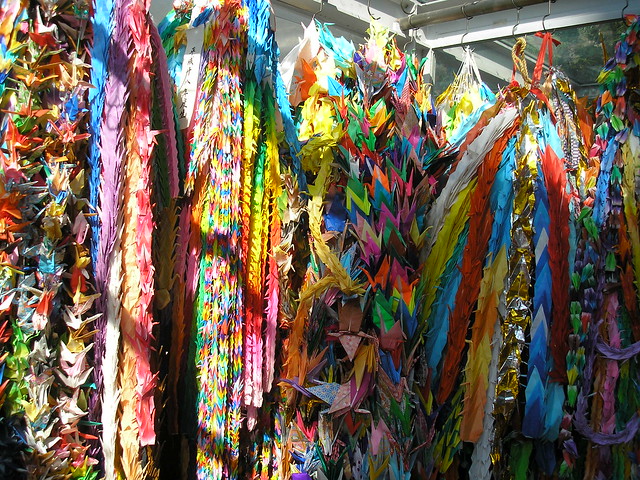 Another attraction in Hiroshima is Hiroshima Castle (広島城), although personally I would say it’s a little disappointing and not worth visiting if you have the chance to go to any of the better castles such as those in Himeji or Matsumoto. The castle is fairly small, contains a museum, and of course it is a reconstruction (having been destroyed when the bomb fell). Hiroshima Castle is also known as ‘Carp Castle’. 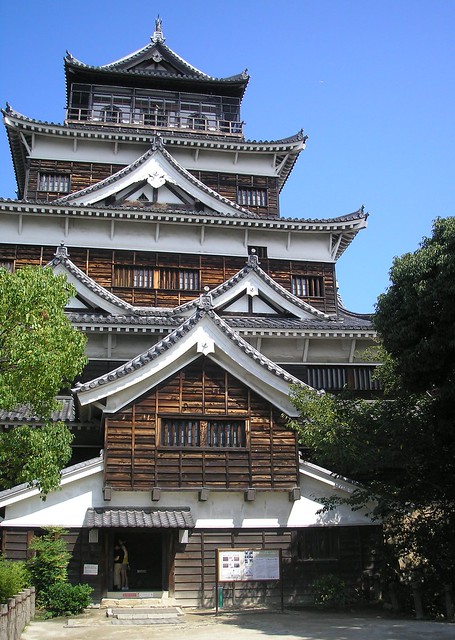 Also worth visiting in Hiroshima is Shukkeien Garden (縮景園). The name of this garden can be translated as ‘shrunken scenery garden’. This landscape garden is certainly a nice place to relax and get away from it all in the middle of the city. The garden dates back to 1620, just after the completion of Hiroshima Castle. 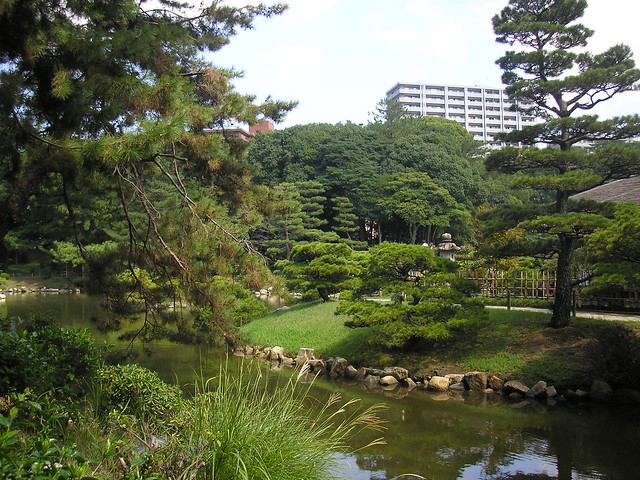 Whilst in Hiroshima, it’s an absolute must to try Hiroshima’s version of okonomiyaki (お好み焼き), known as ‘Hiroshima-yaki’. Okonomiyaki is a savoury pancake-pizza-like dish famous in the Kansai region, but Hiroshima has its own version with ingredients that are layered rather than mixed. In addition, the Hiroshima-style okonomiyaki is served on top of yakisoba noodles – yum! If you want to try Hiroshima-yaki there are lots of places serving the dish in Hiroshima, but the best place to go is Okonomi-mura (お好み村) or ‘Okonomiyaki Village’. There are 25 okonomiyaki restaurants here, each serving a slightly different type of okonomiyaki. The only problem is deciding where to eat!

Moving on from Hiroshima City, the next most famous place in Hiroshima Prefecture has to be Itsukushima (厳島), or Miyajima (宮島) as it is more commonly known. ‘Miyajima’ simply means ‘Shrine Island’, whereas ‘Itsukushima’ is the island’s official name and also the name of the main shrine on the island. Itsukushima Shrine’s main buildings are built over the water, with a red torii gate built out to sea a little so that when the tide is in the gate appears to float. This sight is ranked as one of Japan’s top three most scenic places (Nihon Sankei / 日本三景) along with Matsushima (松島) and Amanohashidate (天橋立). Itsukushima Shrine is also a UNESCO World Heritage Site. I loved Miyajima when I visited back in 2006, although I only had a very brief visit. I’m looking forward to returning this year and spending a night on the island. It should be lovely and peaceful once the tourists have all gone home for the day. 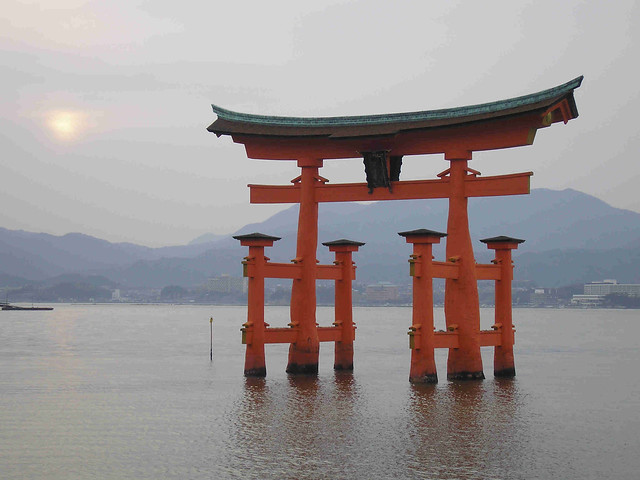 Next is a town I don’t expect many of you will have heard of – Onomichi (尾道). To be honest, I hadn’t heard of it until I found out about the Shimanami Kaido (しまなみ海道). The Shimanami Kaido is a 60 kilometre long toll road that connects Japan’s main island of Honshu to the island of Shikoku, passing over six small islands in the Seto Inland Sea, and it is a popular cycling route. The route begins in Onomichi, which is a quaint port town characterised by its many slopes and narrow lanes. I’ve not been to Onomichi, but I’ve spoken to people who have and it does sound lovely. Onomichi is probably not that high on most tourist’s lists of places to visit as it’s simply not that well-known, but personally I would like to visit for the temple walk which connects the town’s 25 temples (that sounds fantastic!). Despite being just a small town, a number of movies have been filmed in Onomichi. The movies listed are all Japanese, with the most famous being Yasujiro Ozu’s ‘Tokyo Story‘ (1953).

Another small town in Hiroshima Prefecture which I’m very excited to mention is Tomonoura (鞆の浦). I’m actually a little hesitant to mention this town though, as I feel like it might currently be a well-kept secret that I shouldn’t be sharing with the whole Internet, but I’ll take that risk. Tomonoura is another port town, at the southern end of Fukuyama City (福山市), and it is part of the Setonaikai National Park (瀬戸内海国立公園). Recently people have started to hear about Tomonoura due to it being the location in which the Hollywood movie ‘The Wolverine‘ (2013) was filmed. It’s also used as inspiration for the location of the Studio Ghibli animated film ‘Ponyo‘ (崖の上のポニ) (2008). I’m very excited to be visiting this picturesque town later this year and to hopefully soak up some of the creative and peaceful atmosphere Studio Ghibli founder Hayao Miyazaki (宮崎 駿) must have felt when he spent two months in Tomonoura before the production of ‘Ponyo’.

The conclusion? Hiroshima Prefecture has a fair bit to offer, and it is certainly worth the journey to include at least Hiroshima City and Miyajima in a first trip to Japan. The bullet train journey from Hiroshima to Tokyo is only about 5 hours long, which is nothing really when you have a Japan Rail Pass!

Hiroshima Prefecture has some well-known souvenirs (or ‘omiyage’ / おみやげ). The most famous has to be momiji-manju, which is a maple leaf shaped cake filled with red bean paste – yum! These cakes have been popular in Hiroshima Prefecture for over 100 years! This leaf shape is popular, and you will often find other souvenirs with this theme, such as Hello Kitty toys featuring maple leaves. Traditional wooden crafts are popular in Miyajima, and of course these days ‘Ponyo’ goods will be popular in Tomonoura. Hiroshima’s baseball team is called the Carps, and a lot of souvenirs will also feature this popular team and its mascots Carp Boy and SLYLY (a character designed by the same production company as Sesame Street!).

Next week I will be writing about Yamaguchi (山口県). Have you been there? What’s good to eat there and what omiyage should I buy? What are the best sightseeing spots or hidden gems? Please do share your thoughts below, and join me next week for Japan by Prefecture!