Last weekend I went to London for the annual Japan Matsuri in Trafalgar Square. The Japan Matsuri is now in its 7th year, and I have to say it wasn’t one of the best years I’ve experienced. There were some good acts, but there was nothing I personally thought was that outstanding. Still, I stayed for the day, and I was entertained from time to time.

The matsuri started and finished with taiko. Thames Taiko opened, and the wonderful Joji Hirota and the London Taiko Drummers closed, and neither disappointed. I just love the sound of taiko, and it is amazing to hear it being played in the heart of London. 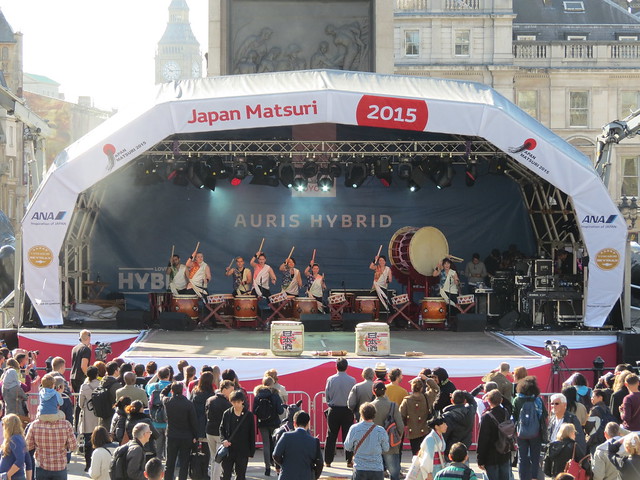 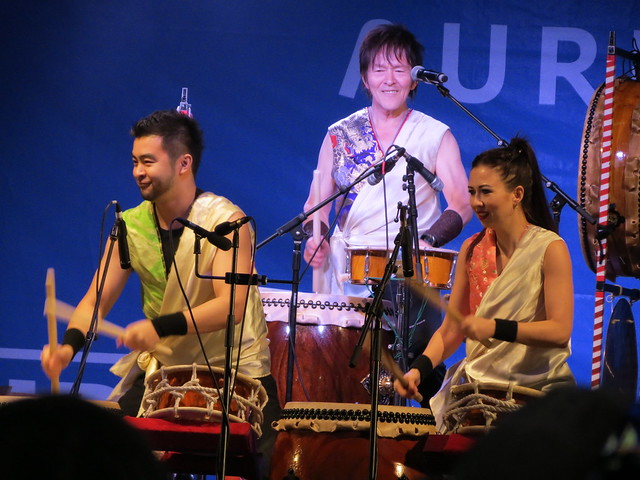 As usual, the Matsuri opened with the traditional ‘kagami biraki’ (鏡開き) sake barrel opening. This is a traditional event at the start of a party or ceremony to bring good luck. 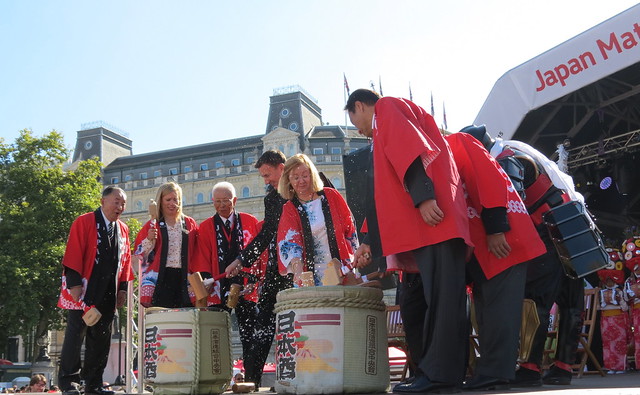 This year’s Japan Matsuri was celebrating 150 years of friendship between Japan and London. 2015 marks the 150th anniversary of the arrival in the United Kingdom of the Satsuma Students from Satsuma – present day Kagoshima (鹿児島県). Because of this, the Matsuri was packed full of Kagoshima-related entertainment, including Guribu (ぐりぶ), Kagoshima’s green pig mascot and his family member Kagobu. 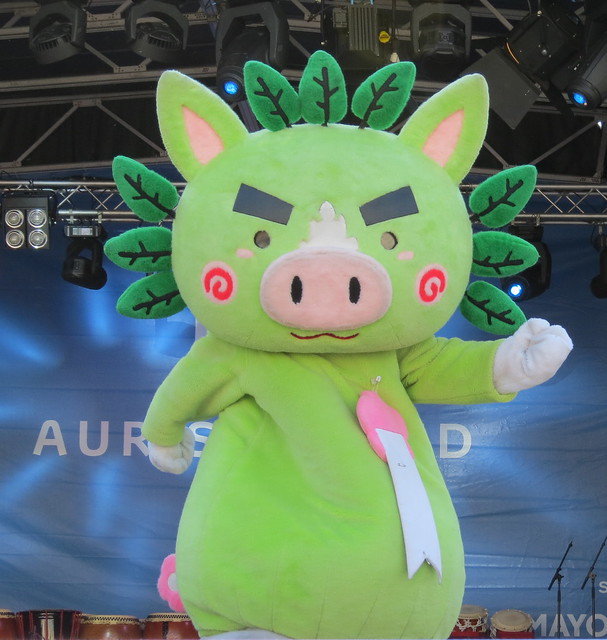 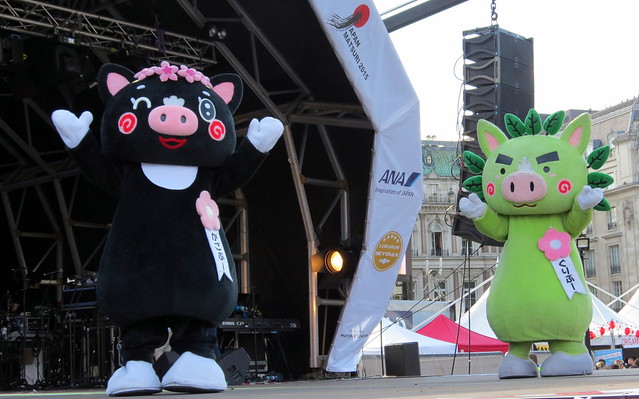 I love pigs, so Guribu is fast becoming one of my favourite mascots! I have the theme song firmly stuck in my head now – it’s infectiously cute.

As well as Guribu, we were treated to a performance by Satsuma Kenshi Hayato (薩摩剣士隼人) and Yassembo, two TV superheroes. Hayato is a warrior spirit dressed in black Japanese armour. On his chest the superhero bears a cross enclosed in a circle – the emblem of the Satsuma domain which ruled the region in feudal Japan. His sword, called ‘Mujinken Jujimaru’, has no cutting edge; instead he sends his opponents flying into the air by the sheer force of his momentum (he doesn’t kill them). Hayato is strong and compassionate, and is a lover of Kagoshima’s beautiful landscape, traditions and food. Hayato was joined by the mischievous Yassembo, a fox spirit always looking to cause trouble and trick Hayato. Despite being enemies, they ended up making amends and deciding to enjoy their time in London together. The performance was very cheesy, but I imagine it would have appealed to kids. You can watched the English version of the TV show here. 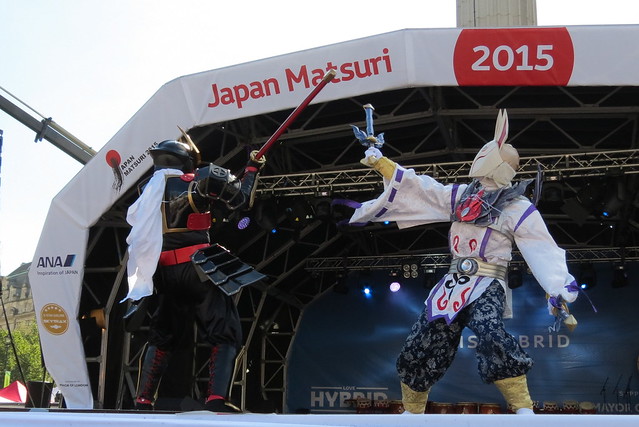 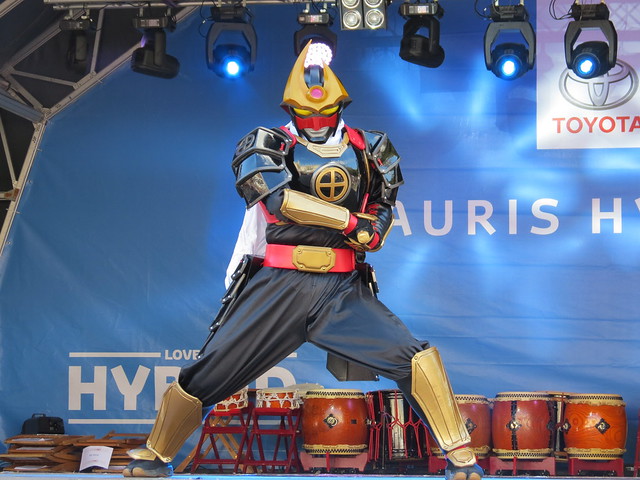 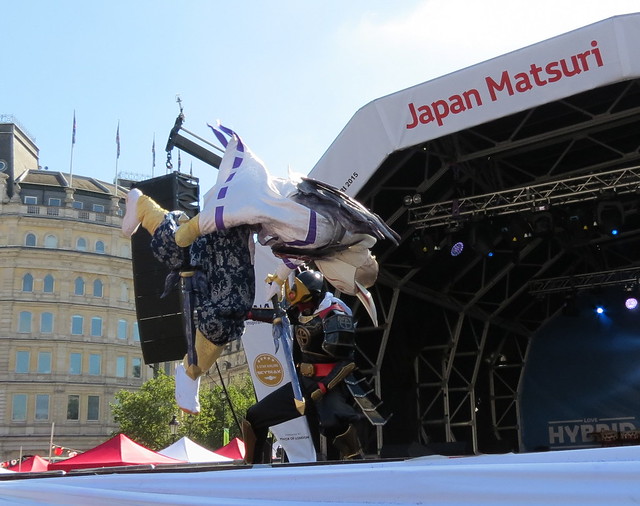 Another performance from Kagoshima was the Izaku Taiko Odori (伊作太鼓踊り). This traditional dance is a victory dance dating back to 1406, which has been passed down through the generations. The drummers are dressed to resemble the warriors of the time, and each drum dancer wears a bamboo and paper banner called a ‘yabata’ strapped to his back adorned with black tail feathers of the Satsuma rooster. Each outfit weighs about 20 kilos! The dance is performed each year on 28th August at Minami Kata Shrine by one of six groups. This year it was the turn of the group from Iriki. 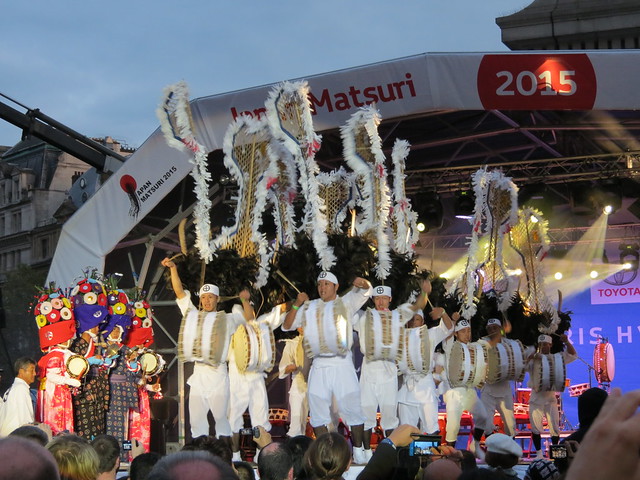 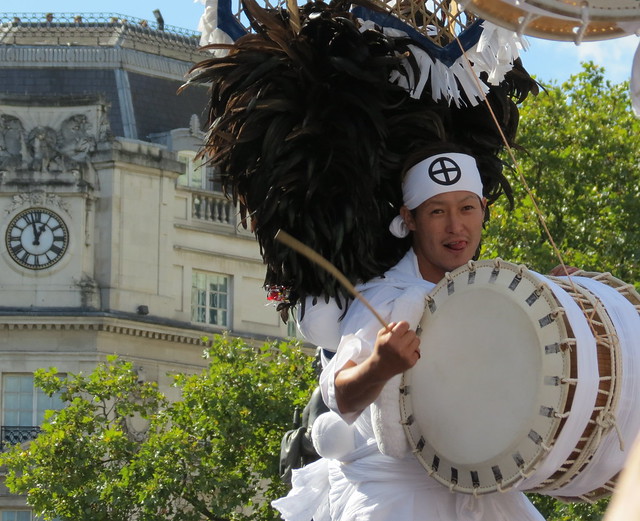 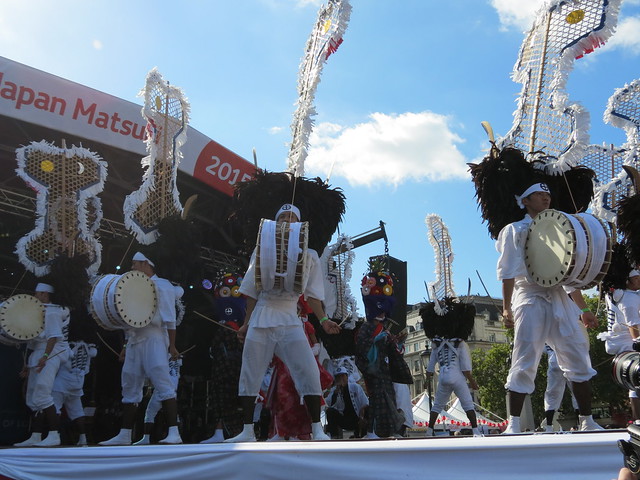 As well as the entertainment from Kagoshima, there were some Matsuri staples such as the SOAS Min’yo Group, Hiroko Tanaka Japanese Dancers, London Okinawa Sanshinkai and the Hibiki Ensemble. Frank Chickens also performed, but I think perhaps they’ve seen better days. 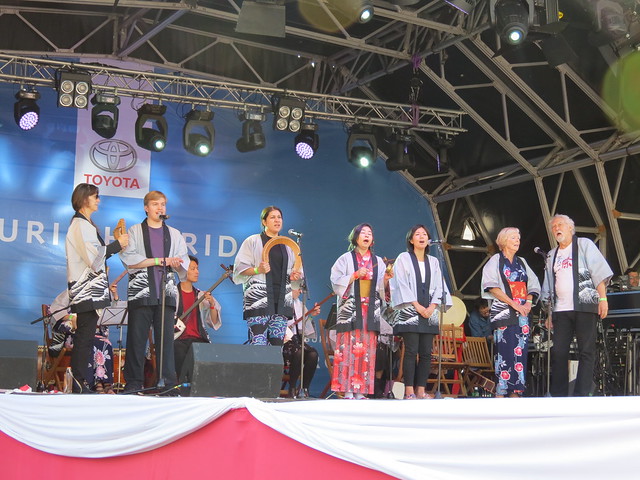 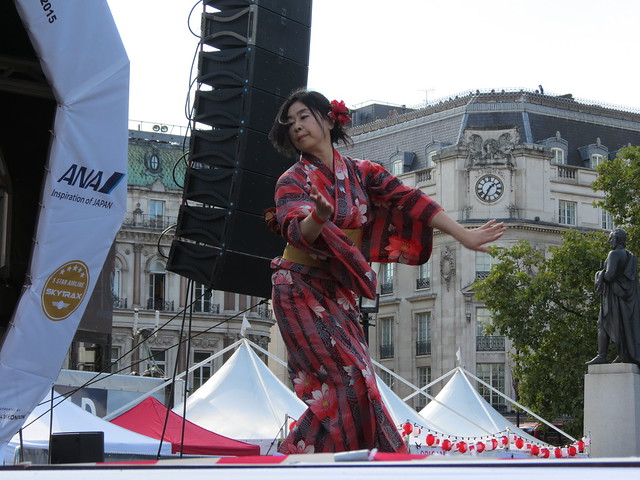 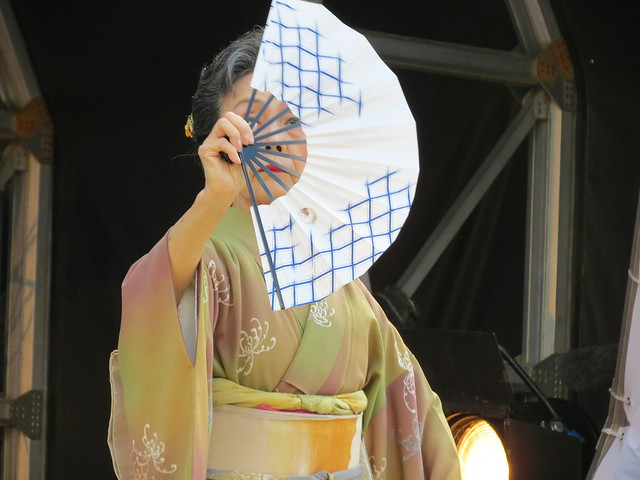 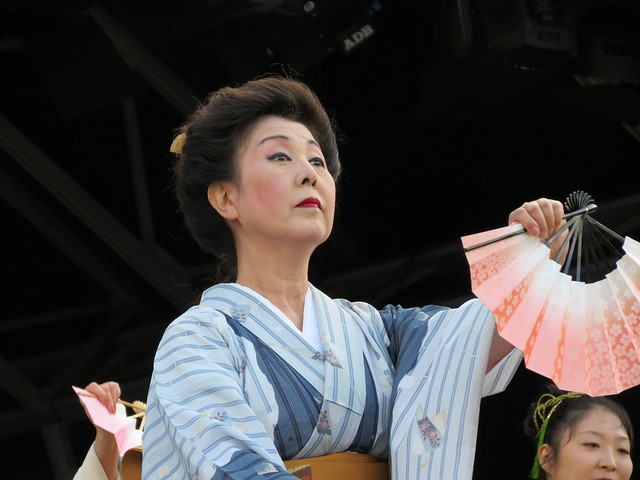 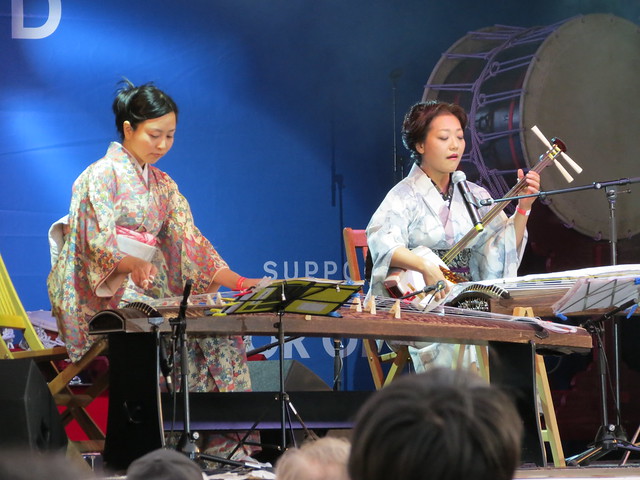 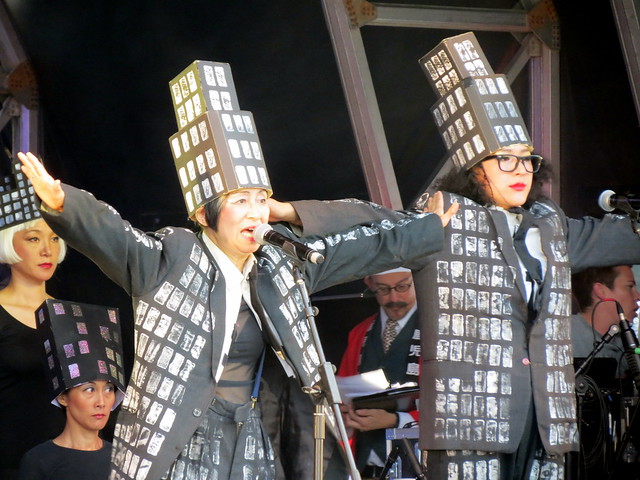 So, it was a good day, and certainly a wonderful thing to celebrate Japanese culture in the heart of London, but it wasn’t the best the Matsuri has ever been. I hope in future years things can perhaps be shaken up a little bit to keep the event fresh, and I hope the Japan Matsuri in London continues to thrive. 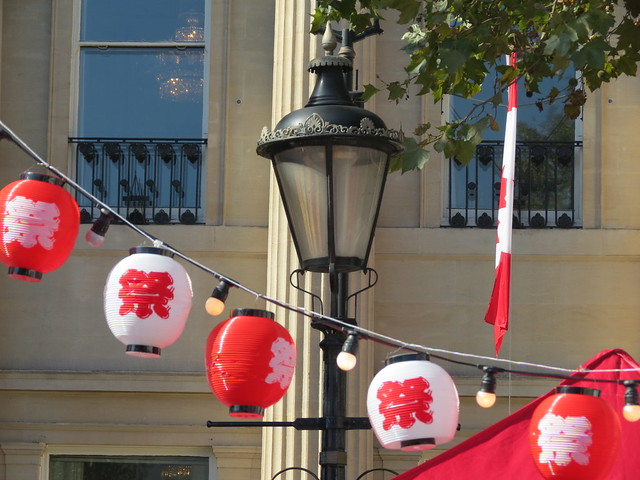