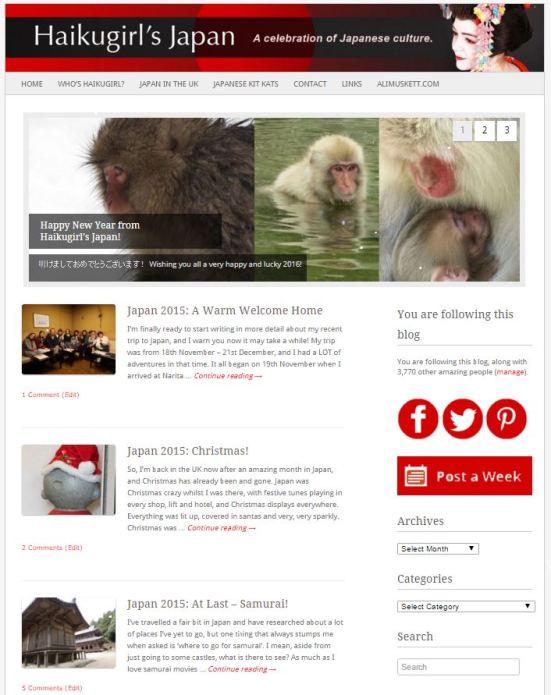 In 2015 I posted 111 new posts, and have almost managed to keep up my promise to post at least once a week (just missed out on two weeks at the beginning and end of my recent Japan trip when I was too busy to post). The busiest day of the year was 23rd February, with 1,018 views (an average day in 2015 saw between 400 and 500 views). The most popular post on that day was Monthly Recipe: Matcha Pound Cake. This year I’ve continued my Monthly Recipe series and managed to post once a month from January to October. Hopefully in 2016 I’ll be able to get cooking again! 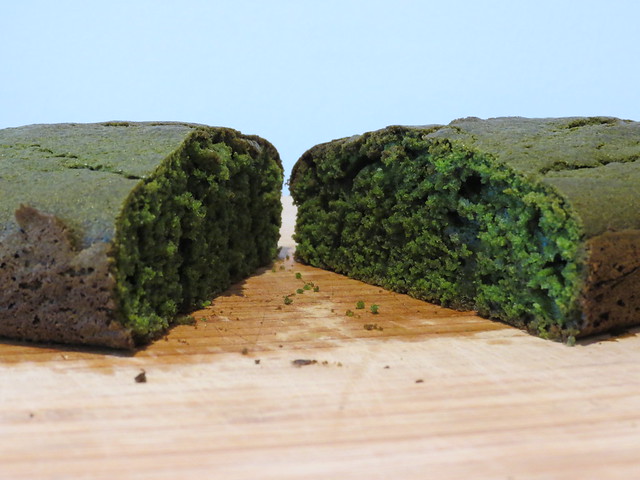 The top 5 posts this year were actually all written in previous years, which is interesting. This has been the trend for a couple of years now – I clearly need to write some posts which attract more immediate attention!

Interestingly, four of this year’s most popular posts are Japanese language posts from 2014’s Word of the Week series. This year I’ve been writing a series called Japan by Prefecture in which I’ve been looking at the highlights of each prefecture. I’ve covered 39 of the 47 prefectures so far, leaving Kyushu to be picked up again some time in 2016.

In 2015 I was lucky enough to travel to Japan again, and I’ve only just come back and started writing about my adventures. I’ll be posting as much as I can, and you can read all about my trip here: Japan 2015. I had the most amazing time! 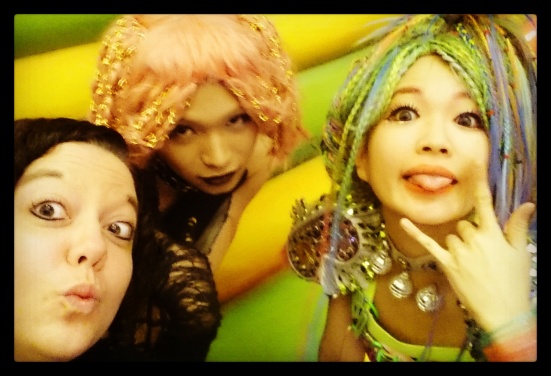 Getting crazy & kawaii at the Kawaii Monster Cafe in Tokyo

Whilst I was in Japan I was quite active on Instagram, posting 128 photos during my trip. 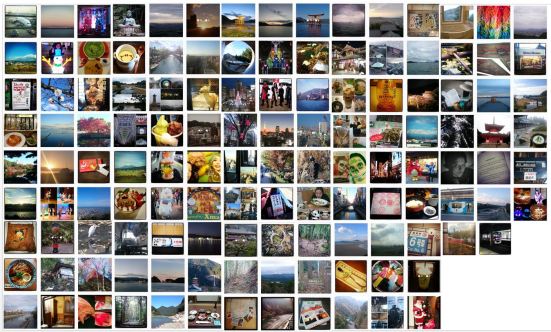 The most popular of those photos, with 31 likes, was this picture taken in Kurashiki: 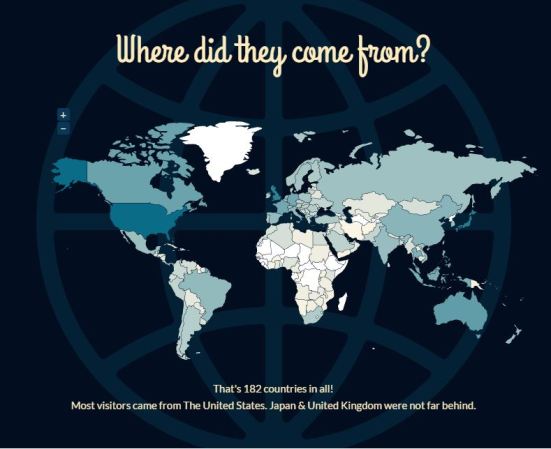 I love receiving comments and interacting with my readers, so a big thank you to everyone who has taken the time to leave a comment this year. It really does mean a lot to me! 2015’s top commenters were: JapanAustralia, ZoomingJapan, Rosco, SengokuSophie and Paul, but thank you to everyone else who left a comment or liked a post as well! The post which received the most comments in 2015 was Japan 2015: The Adventure Begins, with 22 comments. 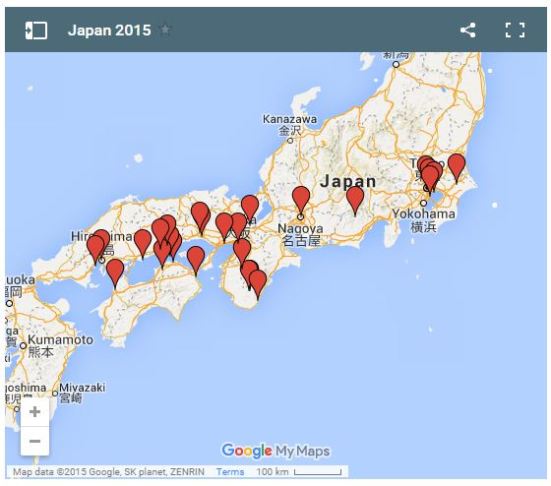 People arrive at Haikugirl’s Japan through many routes, with Facebook and Twitter being the most common referrers. The most common search terms which brought visitors to the site this year were: sugoi meaning, koi no yoken, japanese roll cake recipe, japanese girl, macarons, and otsukaresama, which explains my top posts!

It’s not been easy keeping up with everything this year, with work being busier than ever and being away in Japan for a month. I miss a lot of what happens on social media, but do try to catch up in the evenings and on the weekends. In fact, Sundays are my best day for blogging and catching up on social media! The graphic below shows my posting patterns for the year – 73 of my 111 posts were posted on Sundays (the top row on the graphic). 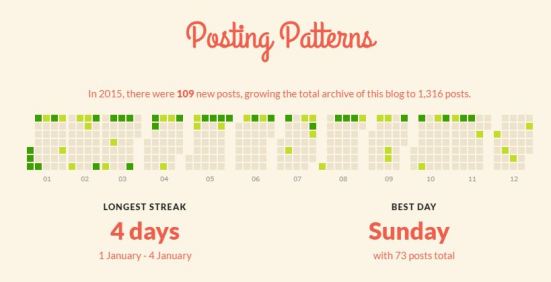 2015 went by in a flash but it was quite a year! I worked hard for the first half of the year to save up for the trip to Japan which I’ve just returned from, and I’m still loving life here in Bristol where I work as a Japan-specialist Travel Consultant (still my dream job after two and half years!)! I’ve found more to blog about than I actually have time for, but at least life is never dull!

The first important task here on Haikugirl’s Japan in 2016 will be to write up all of my exciting Japan adventures. I’ve only just begun, and being realistic I can see myself still writing in spring. Alongside that I’ll be cooking up some new Japanese recipes, reviewing films and books, and posting about anything else that comes my way! Also, 2015’s Japan by Prefecture weekly series is not over yet, so I’ll be finishing that off soon. There won’t be a new weekly series this year as I have rather a lot of other things to write about, but I will still aim to post at least once a week (and knowing me most of those posts will be on Sundays).

I don’t plan to visit Japan in 2016 unfortunately, but hope I will get to go there in 2017 either for work of for a holiday. My main travel plans for 2016 involve a tour to Vietnam, Cambodia and Laos at the end of the year, and hopefully I’ll get to visit one or two places in the UK as well. Studying Japanese isn’t something I’ve focussed much time on in the last year, and to be honest I’m not sure it will be a focus for 2016 either. I would like to get back into studying, but there’s just not enough time for everything! In June 2015 I started salsa dancing, and this takes up quite a bit of my spare time now. Whilst this hobby has nothing to do with Japan on the surface, I always find Japan connections wherever I go! Here’s the fabulous Tokyo Ska Paradise Orchestra (東京スカパラダイスオーケストラ) playing ‘Latin Scorcher’…

Don’t forget, you can always contact me! I will be continuing to attend as many Japan-related events, exhibitions and shows in the UK as I can, and will bring you news of those whenever possible. If you’re reading this and would like me to help promote an event you’re running, review a book you’ve written or a CD you’ve released, or mention anything else related to Japan on this site, please do get in touch and I’ll see what I can do! I’m also keen to run more giveaways, so if you have a shop selling Japan-related goods and would like to talk about running a competition, just drop me a line. 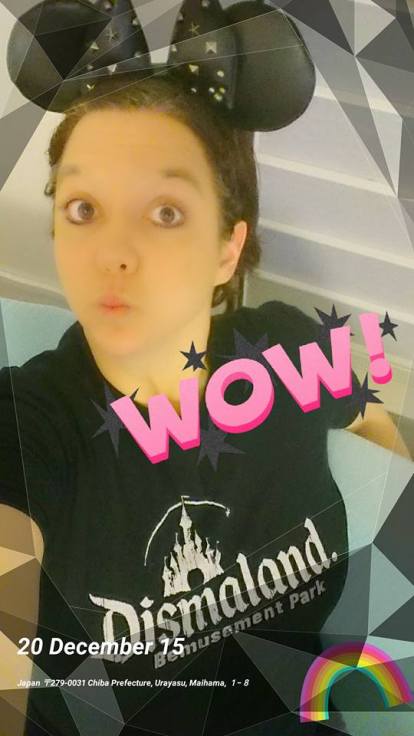 DisneySea fun times for my 34th birthday earlier this month!