Back when I was a teacher at AEON we used to use these textbooks that had conversations in them for the students to practice. I can still recite bits of some of the more memorable conversations, and one that has always stuck in my mind is this one:

It was a bit of a ridiculous conversation, with some vocabulary even I didn’t understand (rack-and-what?!). I never thought I would be writing a blog post about this conversation, but as it turns out I now sort of know what a rack-and-pinion section is, because I have now ridden on the Ikawa Line (井川線) on the Oigawa Railway (大井川本線)!

On Saturday 21st November, my friend Kazue and I set off from Nagoya for a one night trip to Sumatakyo Onsen (寸又峡温泉) – don’t worry, I hadn’t heard of it either! In fact, most people I spoke to (Japanese or otherwise) had no idea where Sumatakyo was. It turns out it’s in Shizuoka Prefecture, and it’s pretty far from everything.

Luckily, the journey to get to Sumatakyo was part of the adventure! We took a bullet train from Nagoya (名古屋) to Hamamatsu (浜松) (where I also used to live) and then a local line JR train to Kanaya (金谷). At Kanaya, we walked to Shin-Kanaya Station (新金谷) and that was where the excitement really started – we were going to ride a steam train! 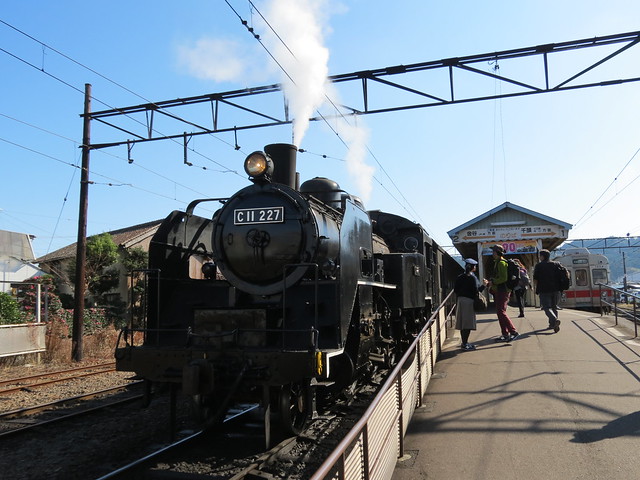 The SL on the Oigawa Railway

In Japan there are a few active steam trains (or SLs, as they are known in Japanese). I’ve never ridden one before, and I’m not exactly a train fanatic, but I was actually really excited when I saw it sitting there puffing away! (I did used to like Thomas the Tank Engine when I was a kid…) Everyone was excited, not just me. Adults and kids were all lined up taking photos of the train, in the train, and in front of the train, and it was really fun. 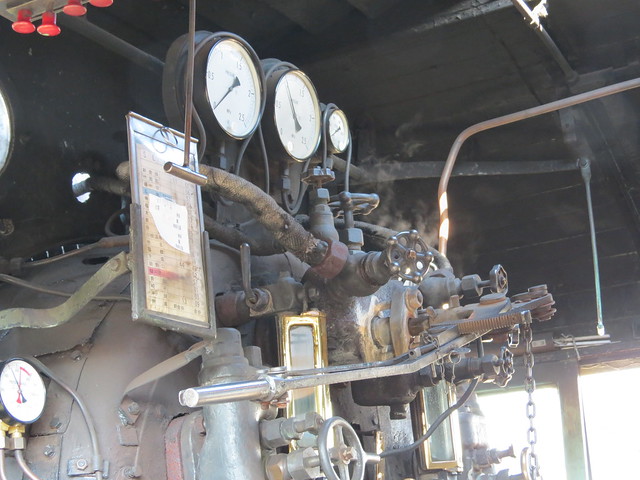 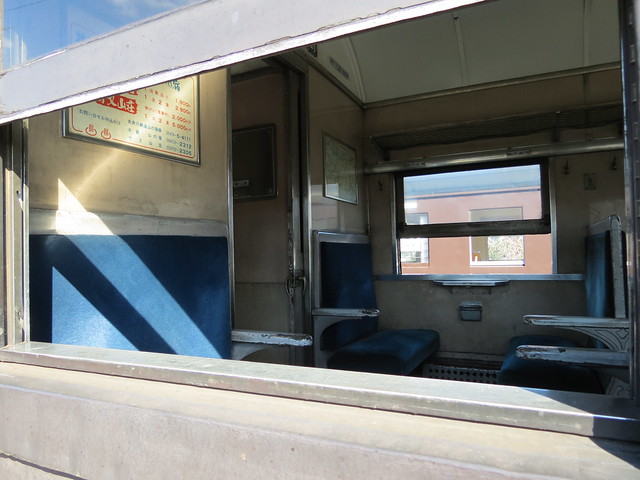 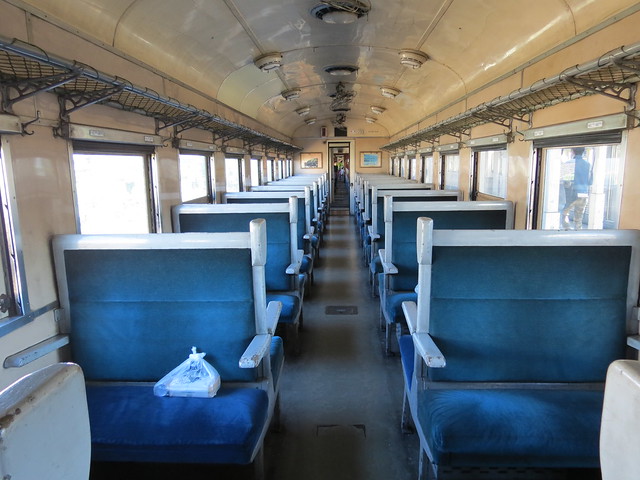 When the train set off there were lots of people waving us off – it was quite an event! 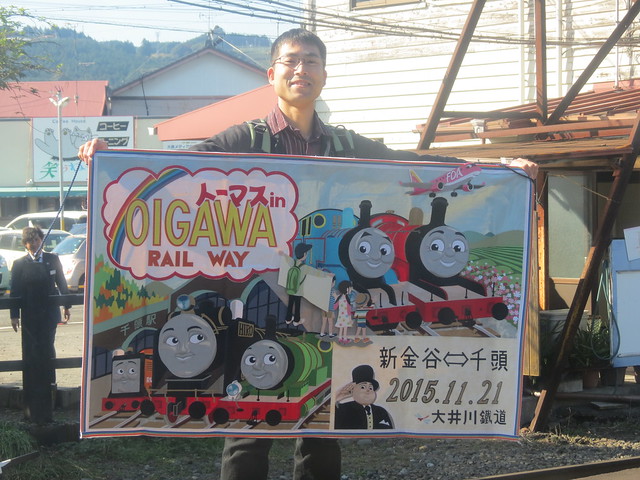 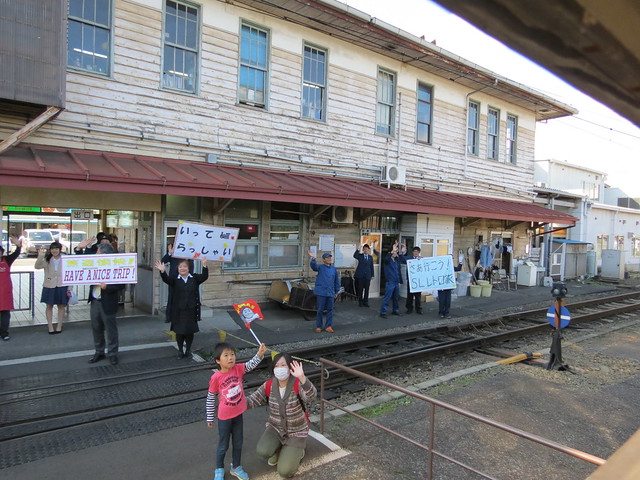 The journey was fun, and I was delighted every time the train went ‘whoo-whoo’! It was also very fun when the female train conductor came round playing a harmonica – I felt like we were in the past!

She even posed for a photo! 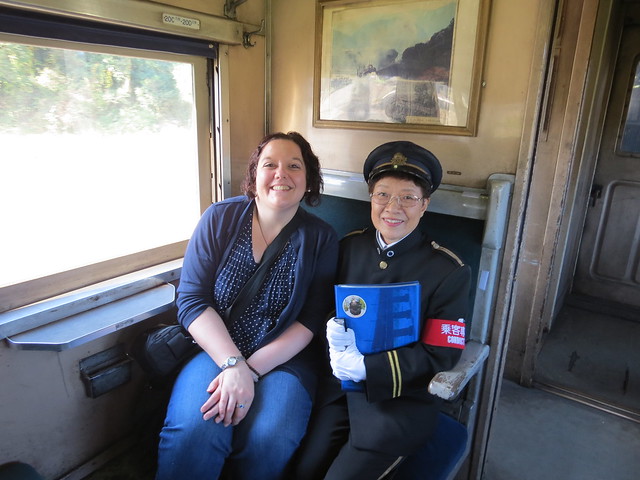 Me & the train conductor

The journey was really picturesque, and it just got more beautiful the further away from everything we got. 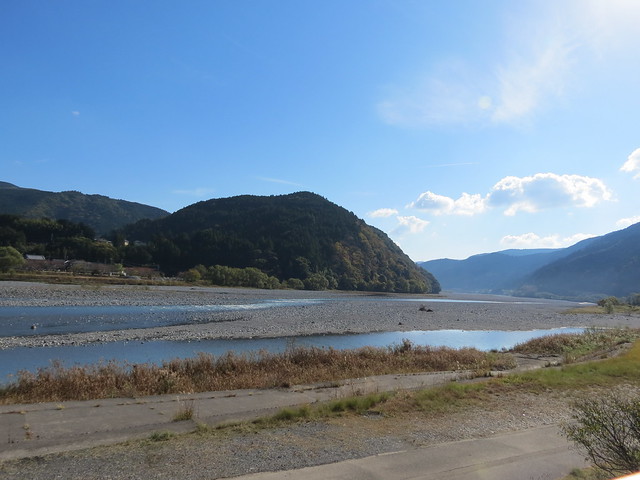 Beautiful views from the SL

We arrived at Senzu (千頭) and then took a bus to Sumatakyo Onsen, where we were staying in a ryokan called Suikoen (翠紅苑). 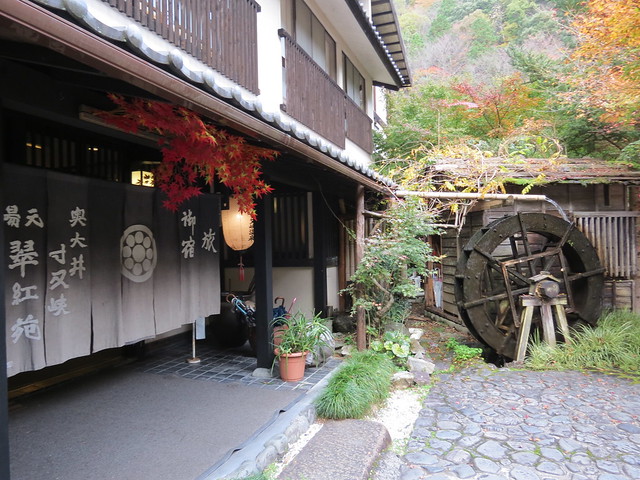 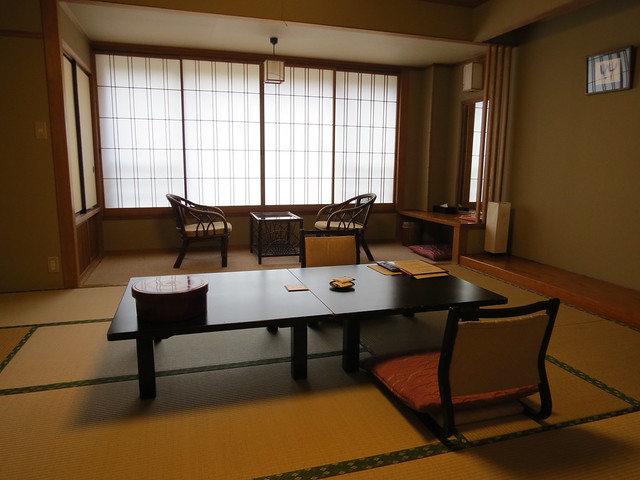 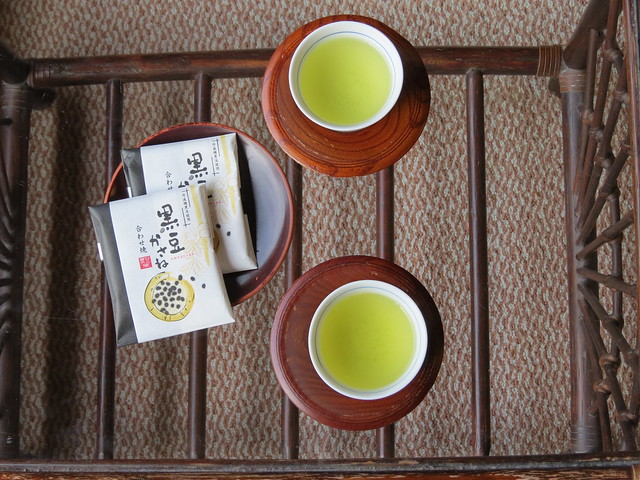 It was mid-afternoon by the time we arrived, so we just had time for a short walk around Sumatakyo. There were still a few coloured autumn leaves around, and it was quite beautiful! 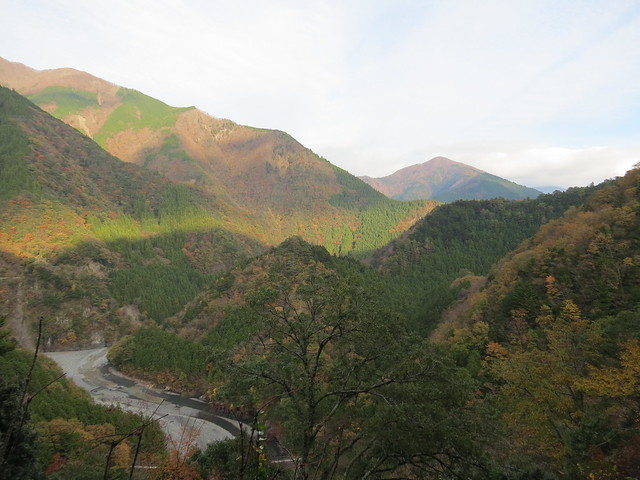 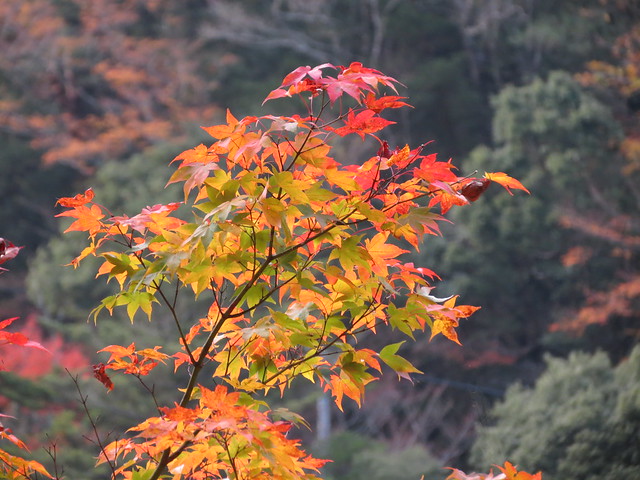 The main attraction in Sumatakyo is the Yume no Tsuribashi (夢の吊橋) rope suspension bridge. The queues were far too long for us to go on the bridge the day we arrived, so we checked it out and decided to get up early to beat the queues the next day. Only around 10 people are allowed on the bridge at any one time, and there was no way we were going to get across in daylight if we queued on the Saturday. 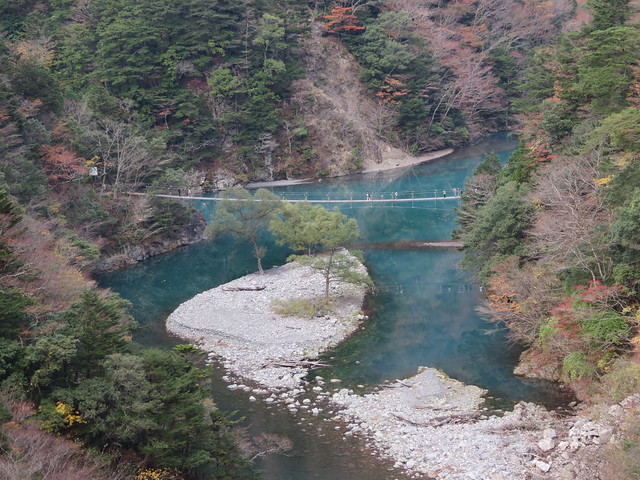 The thought of crossing the bridge really scared me, but I decided to deal with that thought the next day…

So, we got up early on the Sunday morning and headed out to the bridge. The water was so incredibly blue, contrasting beautifully with the red leaves. 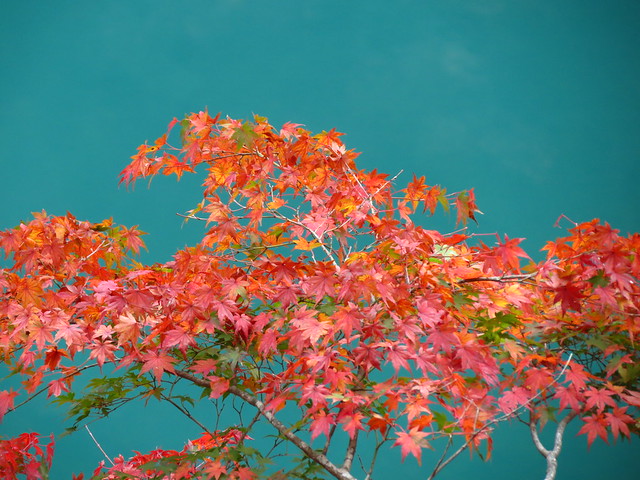 There were already quite a few people out at the bridge, but the queue wasn’t too bad and we were able to cross quite easily. Well, when I say ‘easily’… it was a challenge! I’m quite scared of open heights, and if it hadn’t been for the rope along the middle of the bridge which you could cling on to I never would have made it across. Some people were pausing on the bridge and taking photos – I certainly wasn’t! 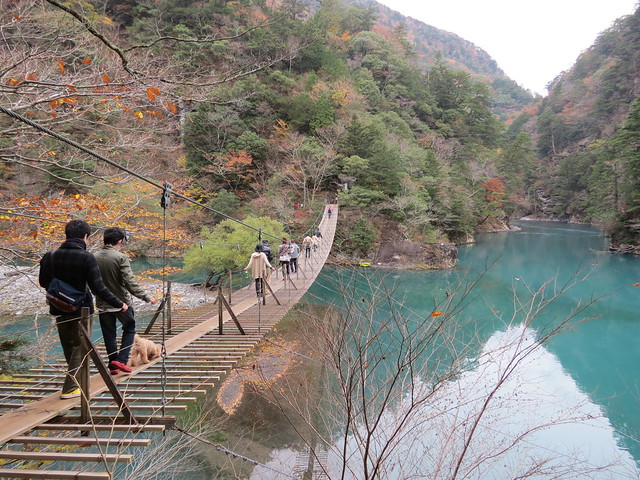 Oh wow… I have to cross that?! 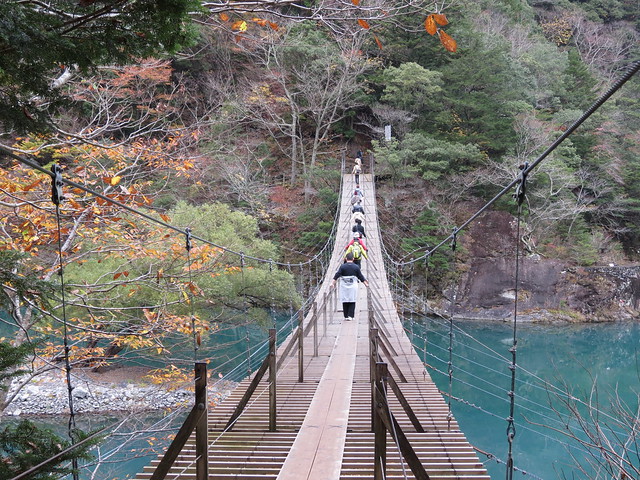 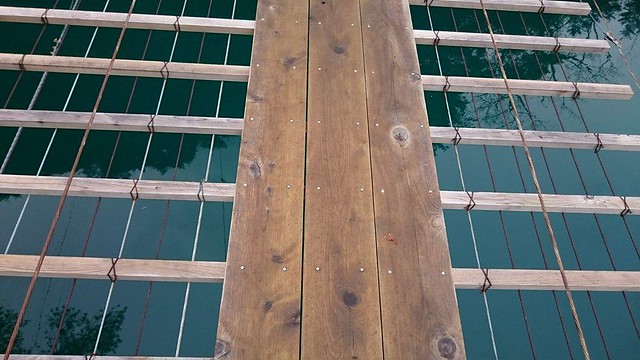 Clearly I was too scared to take this photo – my friend took it! 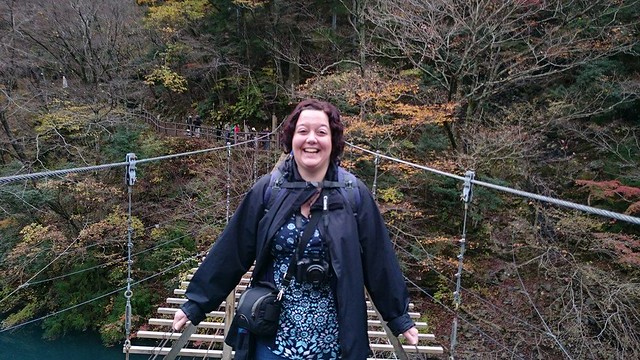 The look of someone who has just crossed a rope suspension bridge!

After walking across the bridge we climbed up some steps and followed a hiking course where we got a great view down onto the bridge. 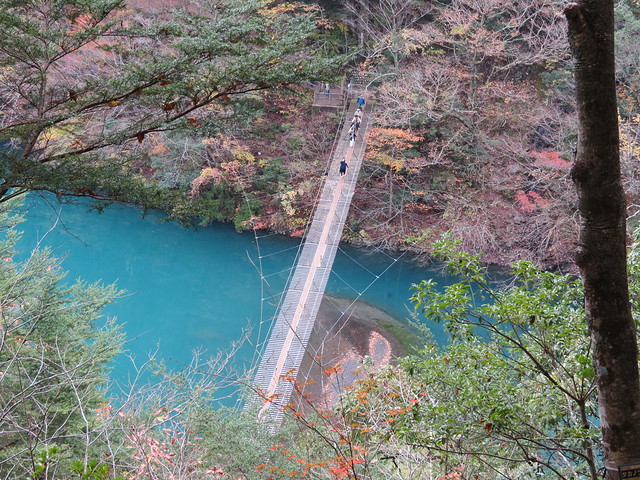 After collecting our bags, we took the bus to Okuizumi (奥泉) and then the Ikawa Line to Okuoikojo (奥大井湖上). So, the Ikawa Line on the Oigawa Railway, as I learnt in my textbook, is the only rack-and-pinion railway currently operating in Japan. And what does that mean? Well, for the technical stuff I recommend reading what Wiki has to say, but basically it is a specially designed railway to go up a steep mountainside. The ‘torokko’ train runs from Okuizumi to the next station Aputo Ichishiro, and then the ABT (‘aputo’ in Japanese) system car is connected to the train. This ABT system has gear wheels a bit like a roller coaster (as far as I understand it), and it helps the train to go up the steep mountainside. I think the line was originally built for transport when the dams in the area were being built, but these days it’s just for tourists and the views are spectacular! 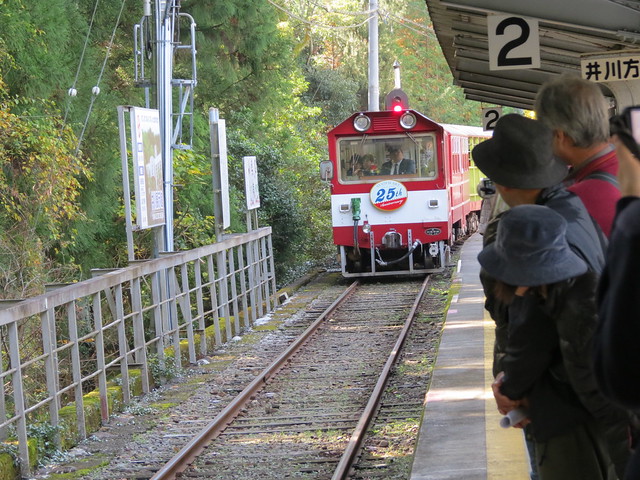 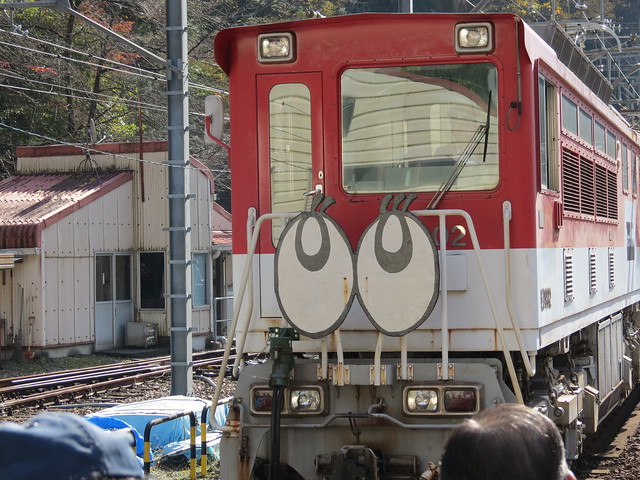 The ABT system – cute 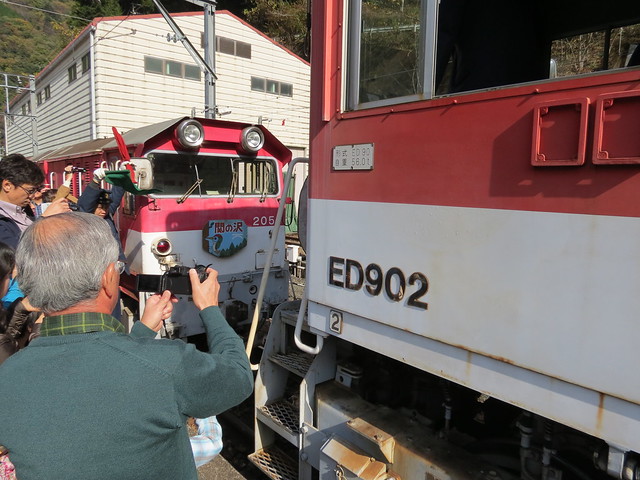 Watching the ABT system connect 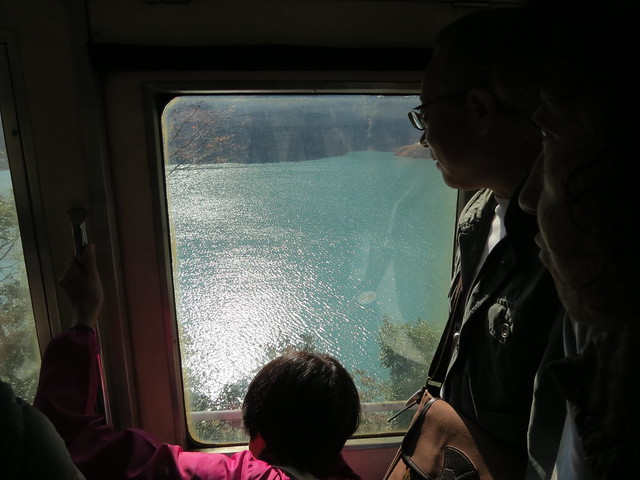 We got off the train at Okuoikojo – the station in the middle of the lake! I didn’t really understand what this was going to be until we arrived, but it is literally a station in the middle of a lake. Well, ‘station’ is pushing it a bit. The train stops on the bridge and you can get off and walk the rest of the way alongside the train track. It’s also pretty scary, but beautiful. 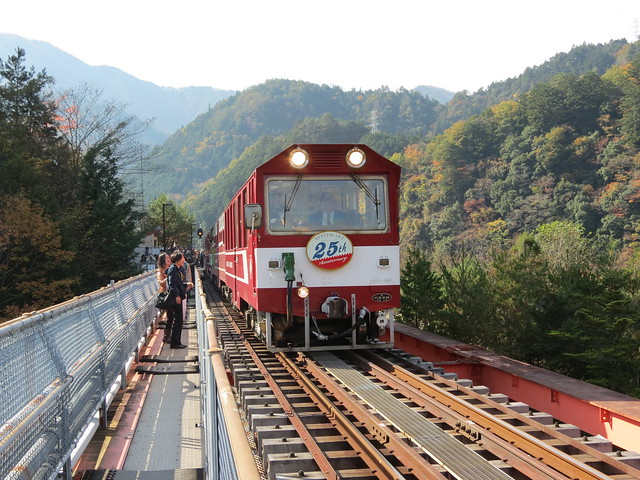 This is the ‘station’ on the lake 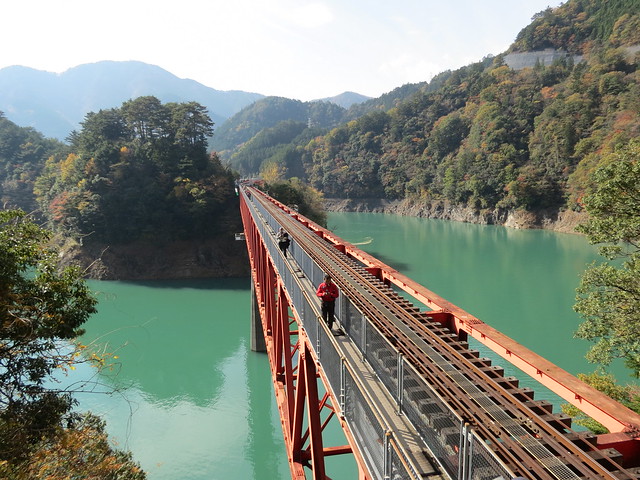 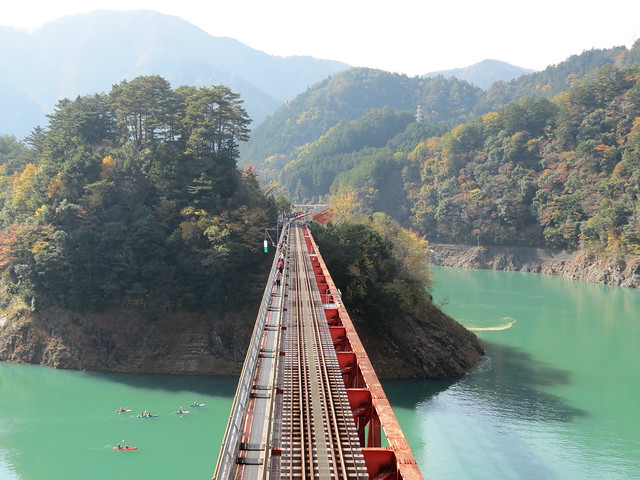 We crossed the bridge and hiked to the next station, Sessokyo Onsen (接岨峡温泉). It was a simple and beautiful hike along the river and through the countryside. Really gorgeous. 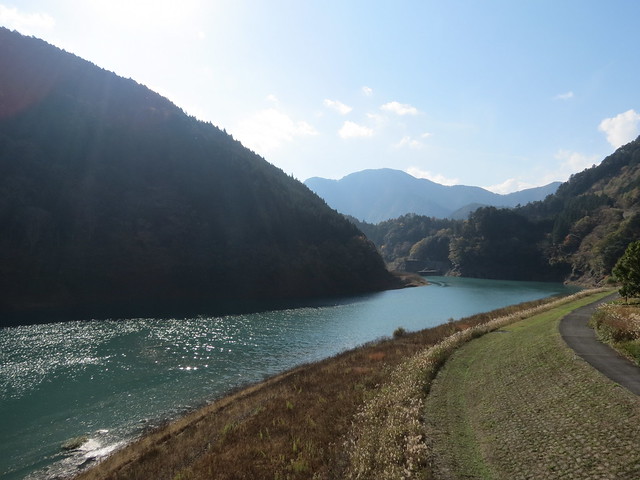 From Sessokyo Onsen we took the train back to Senzu, passing Nagashima Dam (長島ダム) on the way. Nagashima Dam is on the Oi River (大井川), and it was built between 1972 and 2002. I’m not sure if I’ve ever seen a damn like this before, and I thought it was quite impressive. 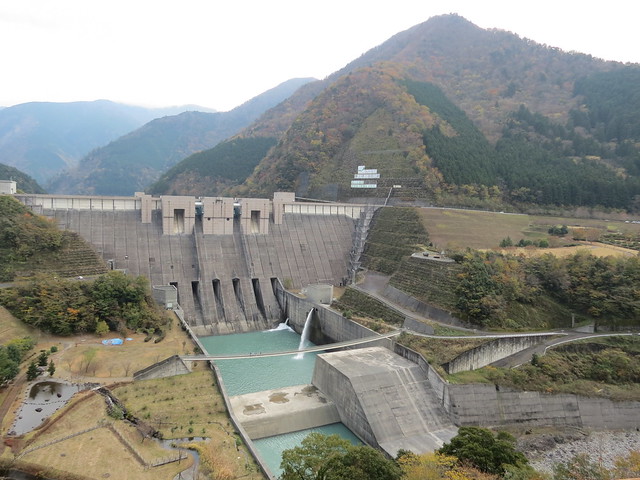 After we arrived at Senzu we took another train to Kanaya, yet another to Hamamatsu and then finally one to Nagoya. It was a long journey, but totally worth it. Sumatakyo and the surrounding area is not somewhere many foreign tourists would know about, and I doubt many have heard of the Oigawa Railway unless they happened to be an AEON teacher or a train enthusiast. There’s a great English PDF here about the Oigawa Railway, and it even gives information about booking SL tickets in English. I really enjoyed my trip off the beaten path, and I’m so glad Kazue suggested going there! I’m also glad I finally know what a rack-and-pinion railway is – mystery solved! 😉