One of the recent crazes in Japan is animal cafes. It started with cats and rabbits, and now extends to other creatures including birds, fish, reptiles and even goats. I’m not keen on birds as pets to be honest, so the thought of going to a cafe filled with owls was not something which particularly excited me, but when Jasmine from Zooming Japan suggested it on a rainy day in Tokyo I thought, what the hell!

As I arrived in Harajuku, early as usual, I ran into this friendly lady promoting the cafe we were planning to go to! 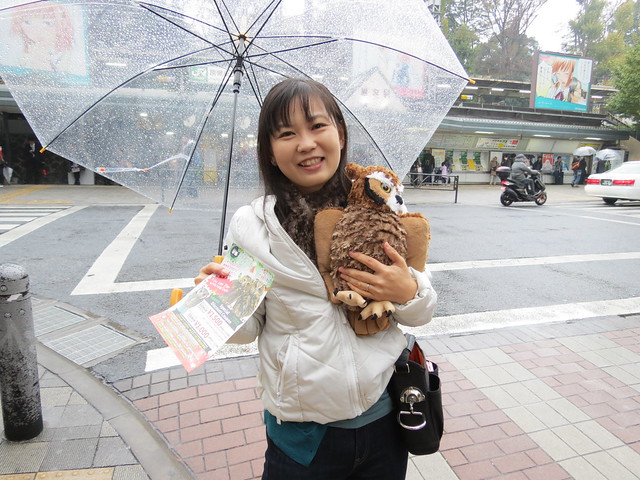 The leaflet she gave me proclaimed “you can play with real owls”, which was something I couldn’t quite imagine myself doing. Although I remember seeing owls on display at events when I was a kid, my memory is of those being barn owls either out in the open or in large spaces such as village halls. They weren’t kept there – it was just for an event. I wasn’t really sure how I felt about the idea of owls in a cafe, which I assumed was going to be a small space. I hoped they wouldn’t actually be wearing santa hats. 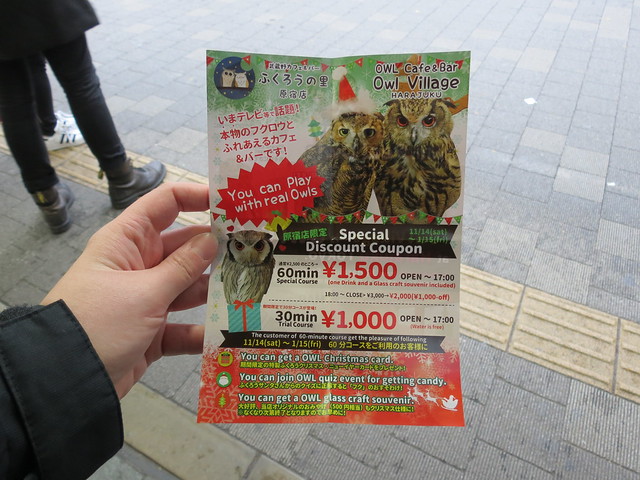 We made our way to the owl cafe, Fukuro no Sato (ふくろうの里), which is just a minute’s walk from Harajuku Station and found it easily. The tiny cafe was on the 4th floor of a building in Harajuku, and we were the only visitors at that time (some other women came in later). The owls were in a separate room to the bar/cafe area, which was one relief (I didn’t like the idea of owls flapping about whilst I drank my tea). The cafe area was nicely decorated and there were owl motifs everywhere I looked. 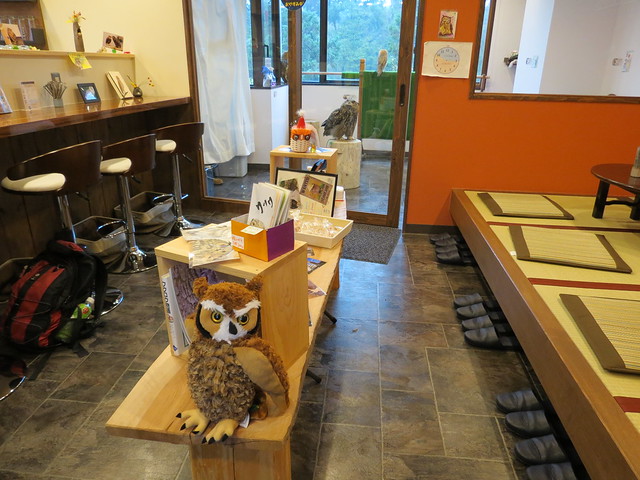 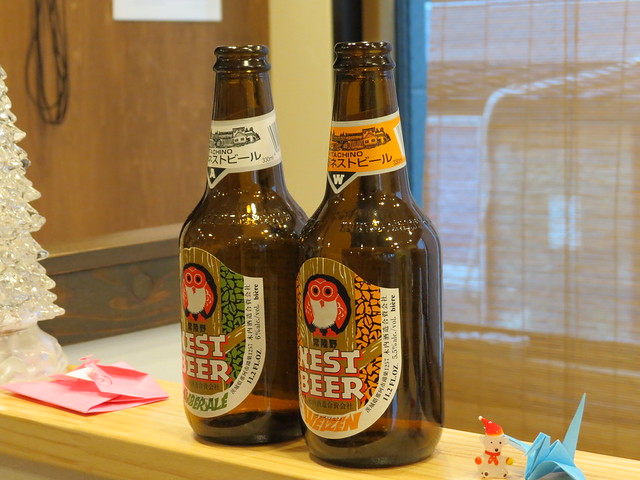 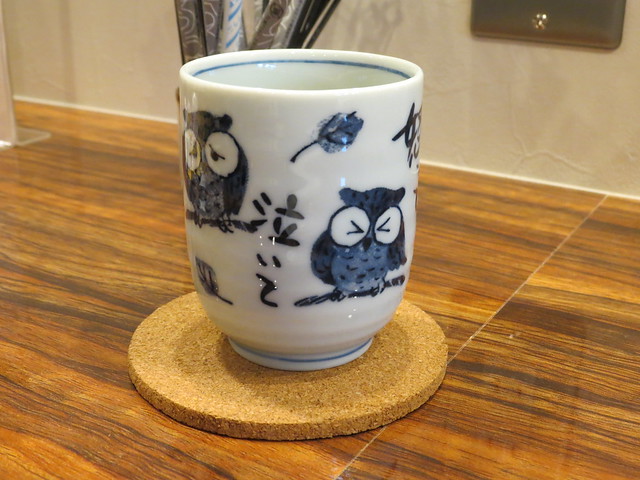 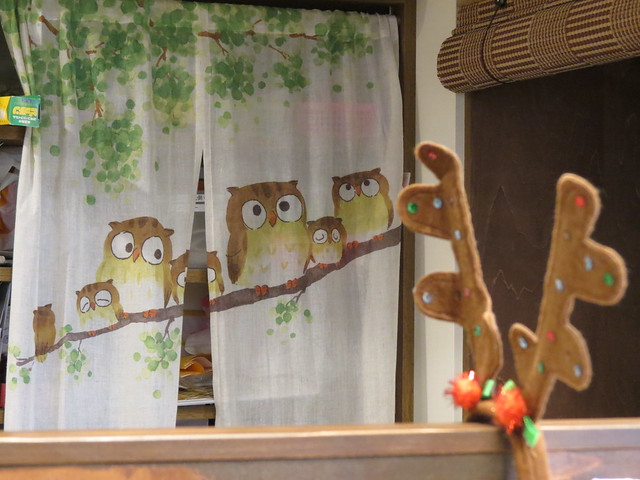 We paid ￥1,000 each to spend about 30 minutes in the owl room. There was a member of staff there the whole time to make sure we didn’t do anything to harm the owls, and they told us about the different owls and introduced them all by name. They seemed well looked after, but I couldn’t help wondering if it was really ok to keep owls chained up in such a small space – especially the really big ones. One had a massive wing span and when he flapped you could really feel the breeze! 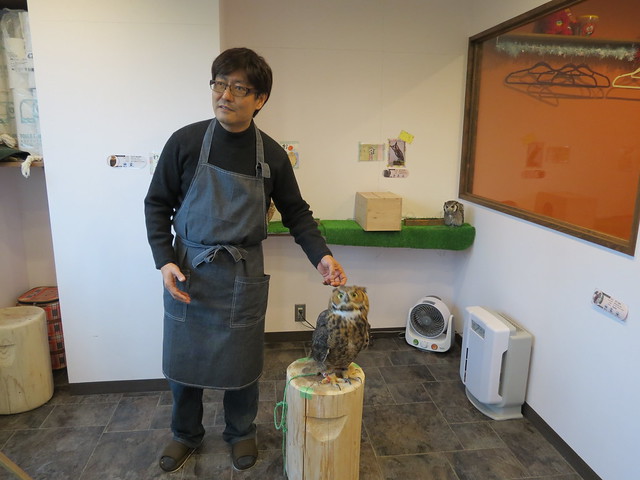 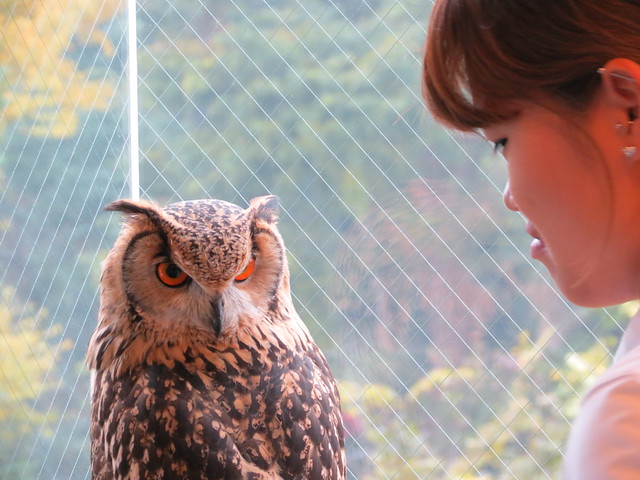 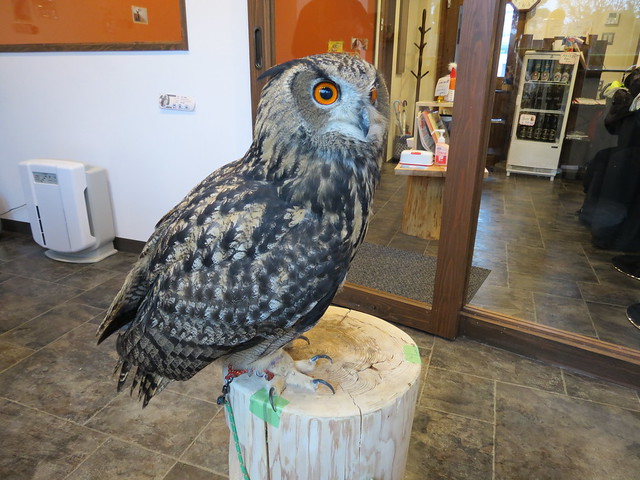 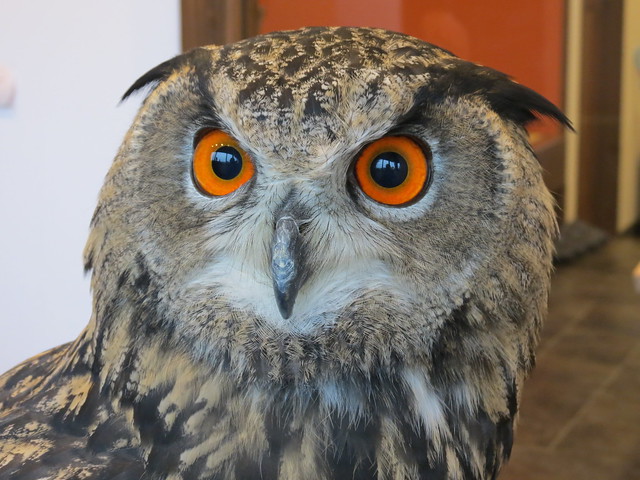 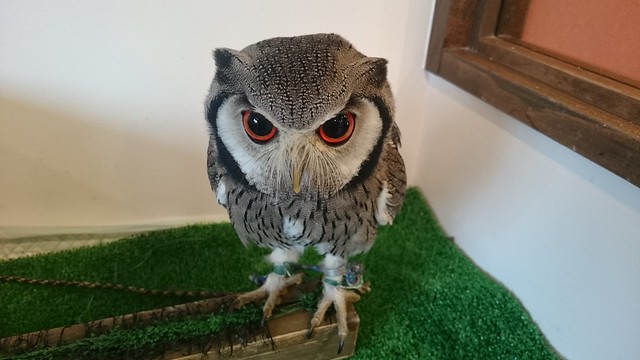 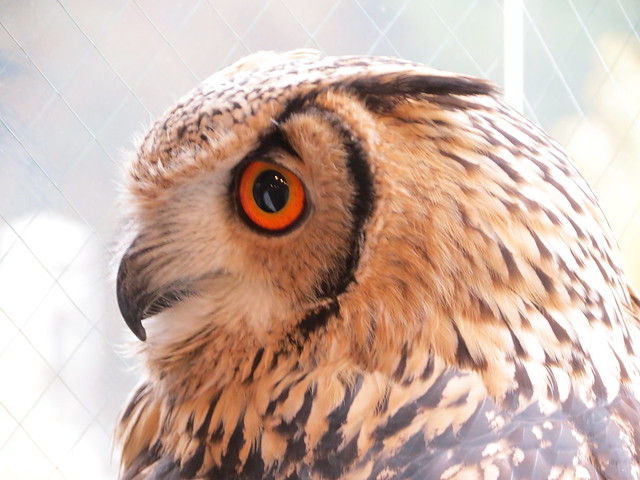 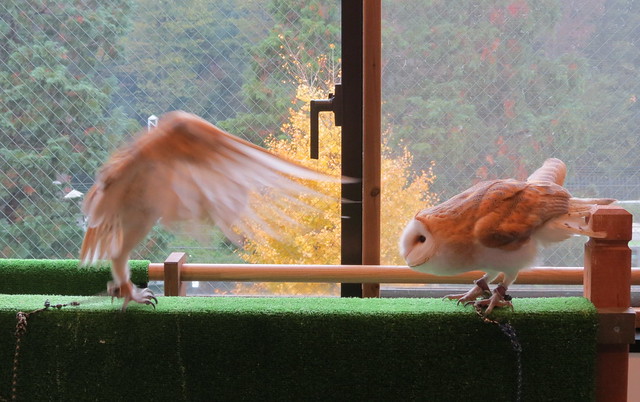 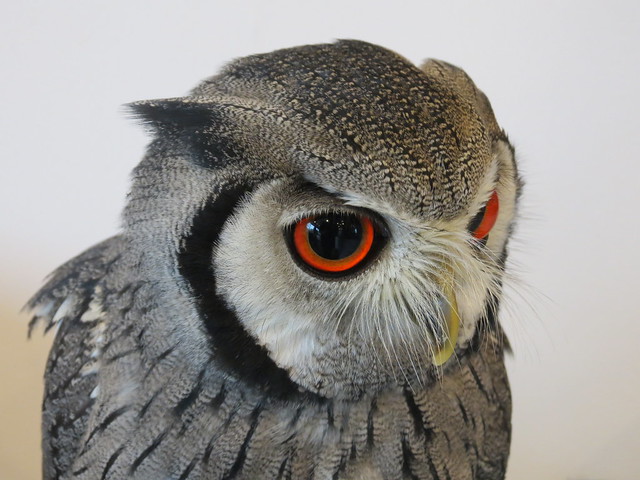 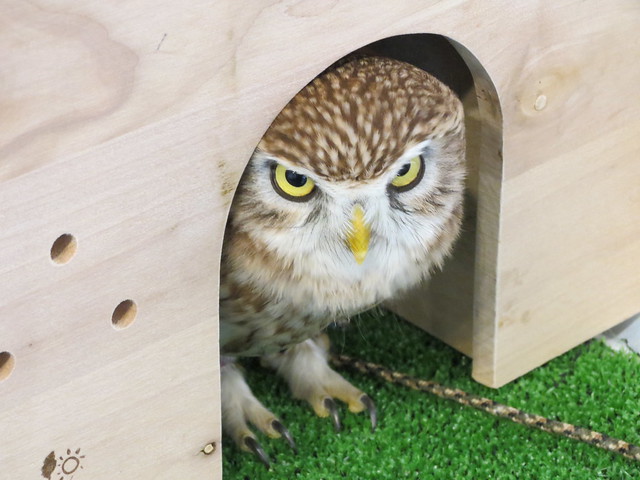 We were allowed to gently touch the owls… 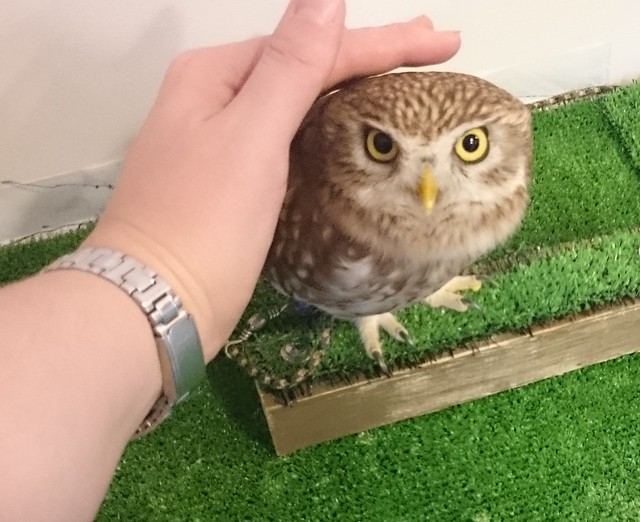 And take photos (without a flash of course)… 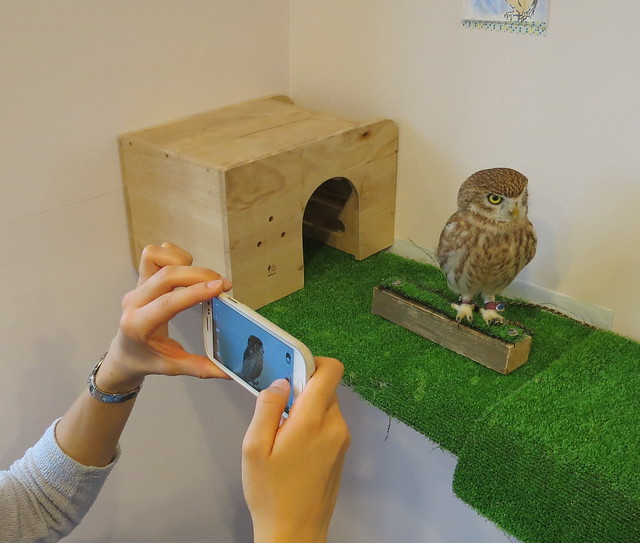 We had the opportunity to feed them for an extra charge, but as they eat raw chicken I decided to just watch the staff feed them. 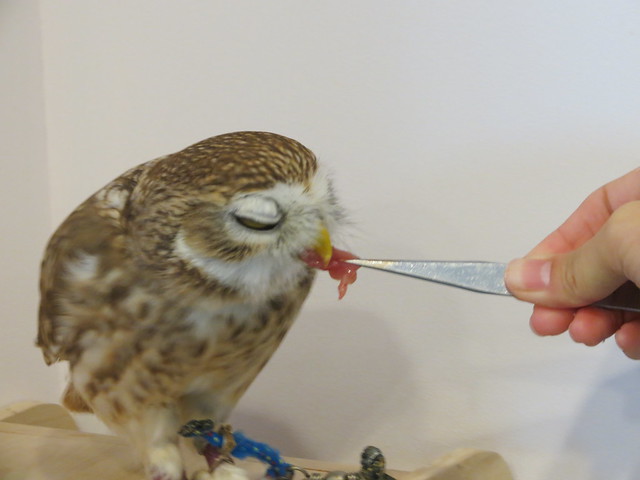 We were also allowed to hold the owls. The small barn owl was fine… 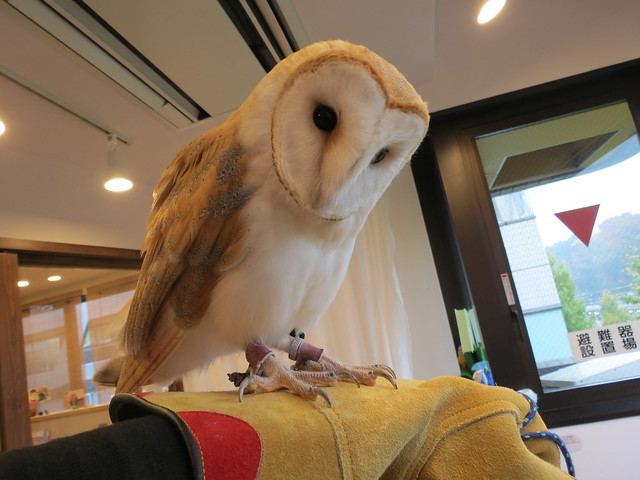 But the big owl freaked me out! It also weighed a tonne! 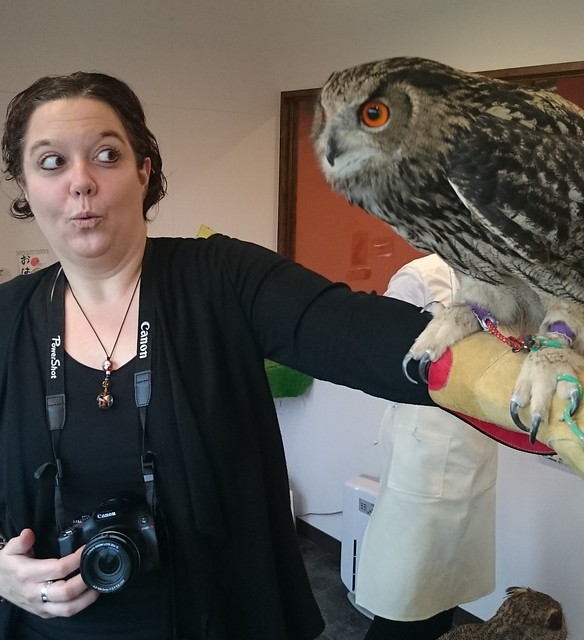 So, are owl cafes worth a visit? I guess it will always depend on the individual. Personally, I don’t think owls are to be played with and I didn’t like to see them kept inside in a relatively small space, although it did seem they were well looked after. I wouldn’t go back, but I’m glad I gave it a go and it was fun to hang out with fellow blogger Jasmine!

Fukuro no Sato (Owl Village) has branches in Harajuku and also Kichijoji in Tokyo. Find out more on their website, which is in Japanese with a sprinkling of English: owlvillage.jp. If you are thinking of visiting, check out their educational rules and policies video… 😉 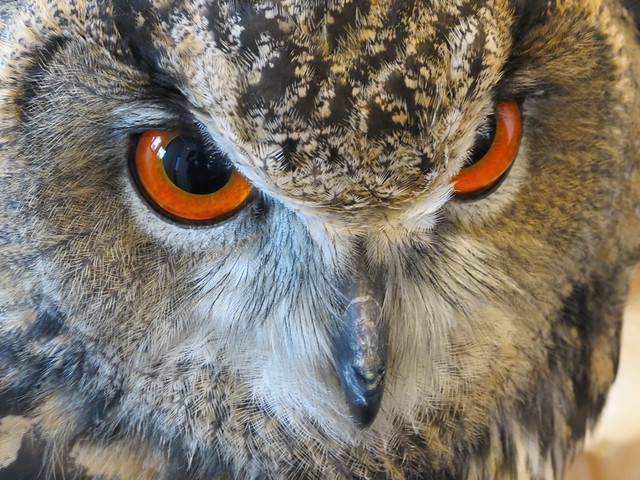