Somehow it’s May, and I’m still writing about December! It was Friday 11th December when I arrived in Matsuyama (松山) in Ehime Prefecture (愛媛県). I was excited to be there, and excited to finally be having a two night stay in my busy trip where I had been hopping from one destination to another. Matsuyama was to be my last stop in Shikoku, and I was glad to be able to slow down and enjoy it at a suitable pace, although I was still working.

My hotel was conveniently right in the centre of Dogo Onsen (道後温泉), and my room looked out on to Dogo Onsen Honkan (道後温泉本館), the main attraction of Dogo Onsen. 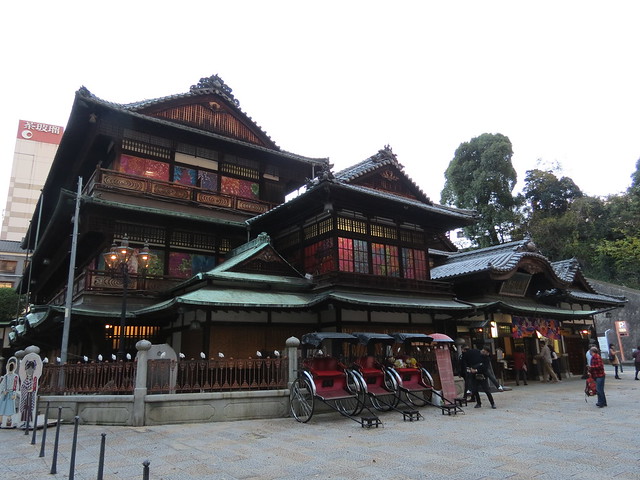 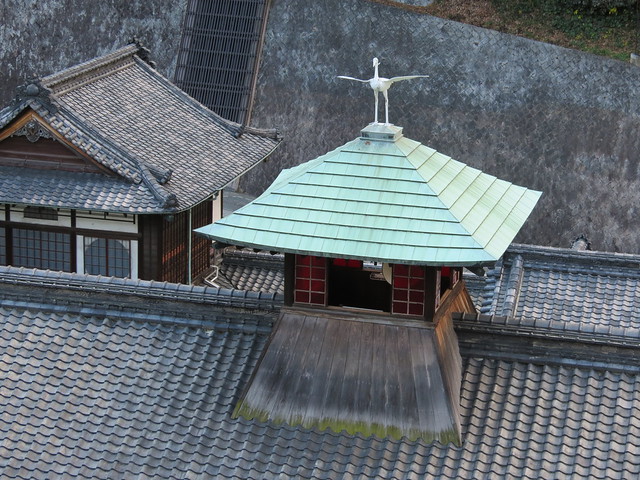 Dogo Onsen Honkan is said to have been inspiration for the Studio Ghibli film Spirited Away (千と千尋の神隠し), and I could definitely see that in just a glance. Later as it grew dark and the streets filled with the clip-clop sound of geta sandals as people wandered to and from the onsen in their yukata it felt even more like a Studio Ghibli movie.

The beauty of Dogo Onsen was enhanced when I visited by the Mika Ninagawa X Dogo Onsen exhibition which was scattered throughout the area. Dogo Onsen Honkan was decorated, as were some of the trams and other buildings. Some girls wore colourful yukata with a Mika Ninagawa print as they wandered around the onsen town, and lanterns decorated the Dogo Arcade. (See more about the exhibition at Tsunagu Japan.) 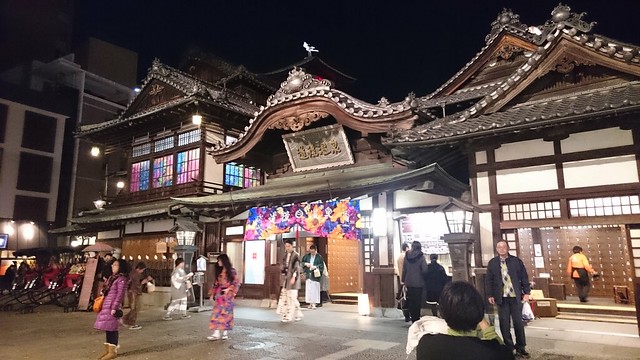 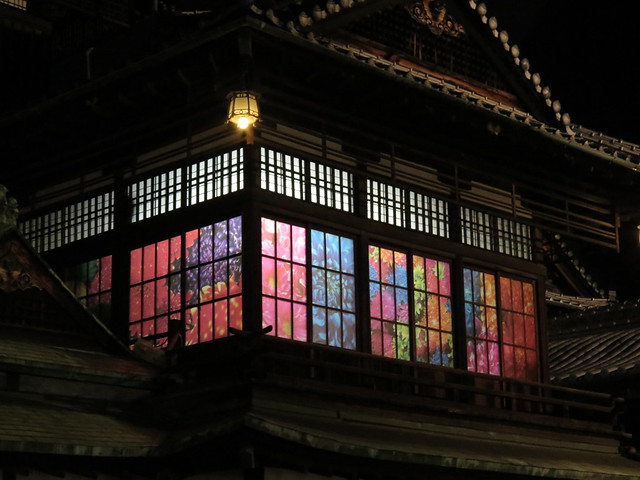 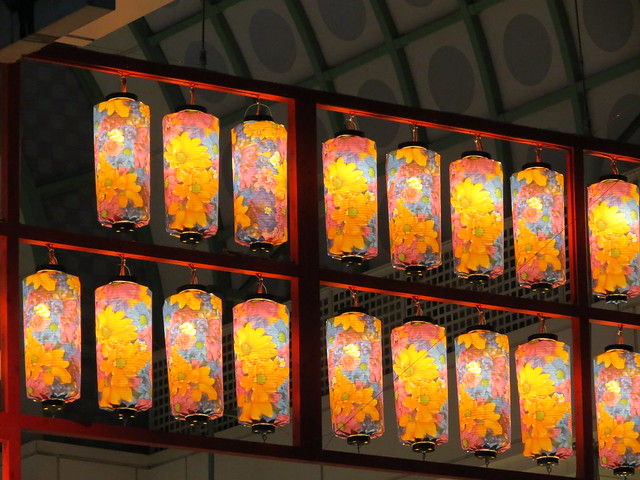 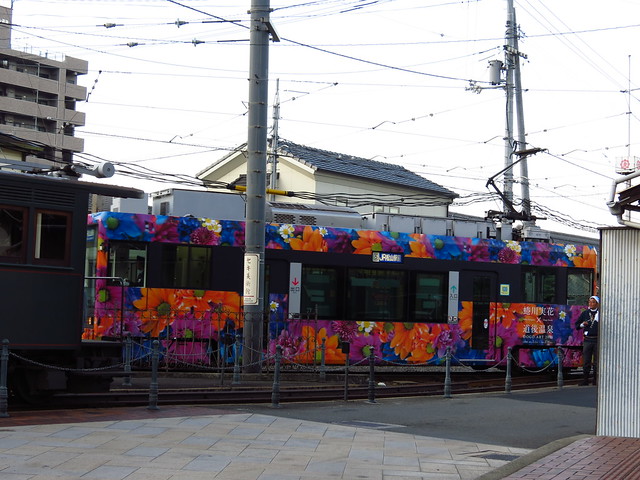 I loved Dogo Onsen as an area, and poking around the shops in Dogo Arcade was fun. But, if I’m honest, I could have skipped the onsen part of the experience and still had a good time. Still, when in Rome… I felt I couldn’t exactly stay in Dogo Onsen for two nights and not try out the actual onsen, so I did.

The board of prices and services was mind-boggling: 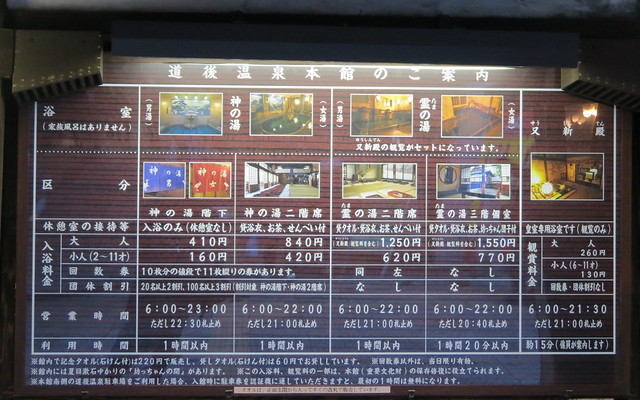 But luckily my hotel had provided me with an easy English guide to the oldest hot spring in Japan, which I thought was quite wonderful!

How to enter the building of Dogo Hot Spring…

How to enter the building of Dogo Hot Spring…

I went for the ￥1,250 option, which meant I could bathe in two different baths (Tama-no-Yu and Kami-no-Yu), I could borrow a yukata and towel, I had a cup of green tea and a rice cracker in the lounge, and a tour of the exhibition room, Botchan’s room and Yushinden, the royal family’s bath.

The whole experience was odd. I think if I had gone with friends it might have been more fun, but on my own I can’t exactly say I enjoyed it. I’m glad I can say I have bathed in Japan’s oldest hot spring, but I don’t think I’ll be rushing to do it again. The building is massive and very old and creaky, which is cool. I couldn’t take any photos inside, of course. The women running the building were very organised and efficient, but seemed a little unfriendly. I don’t think it was just that I was a foreigner – they seemed like that with everyone.

The bath itself wasn’t my favourite hot spring bath at all. In fact, I preferred the Dormy Inn hotel’s bath in Takamatsu where I had stayed a few days earlier. It was very small and dark, and although I’m sure it wasn’t dirty it just didn’t feel clean. Anyway, I had a go, and then I went to see the exhibition room and royal family’s bath. An English speaking guide reeled off a script, explaining than the Yushinden was a special bath constructed for the royal family in 1899. Only the royal family were ever allowed to use the bath, even though they didn’t live in Matsuyama and only visited occasionally.

After just about feeling like I’d got my money’s worth, and at least feeling like I’d ticked a massive box, I went off to wander around the arcade in my yukata and geta. I have to say, this was actually the part I enjoyed the most, as I had never really been outside in just a yukata before and it felt very freeing! The arcade was full of all sorts of shops selling onsen paraphernalia, gifts, souvenirs, food and knick-knacks. There were a lot of orange and citrus themed foods, as these are the speciality of the area. Yum! 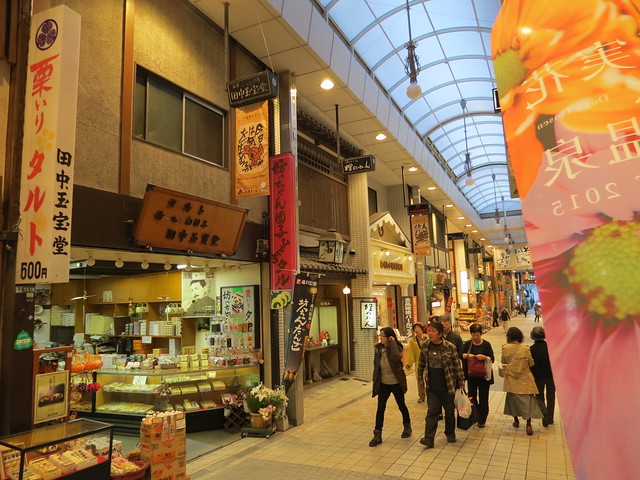 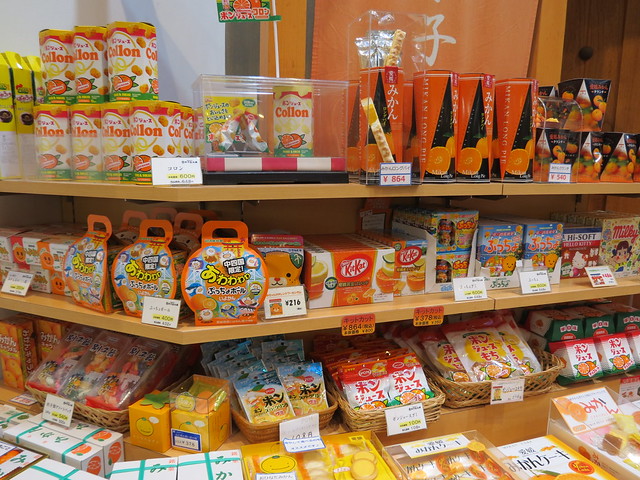 The most famous souvenir food is Botchan Dango, which I had to try of course. They were so yummy and sweet! Botchan (坊っちゃん), by the way, is a novel by Japanese author Natsume Soseki written in 1906. The novel is set in Matsuyama during the Meiji Restoration, and it is a popular choice on the school curriculum. Botchan (meaning ‘young master’) is the quick-tempered and arrogant first-person narrator of the novel, which has a central theme of morality. 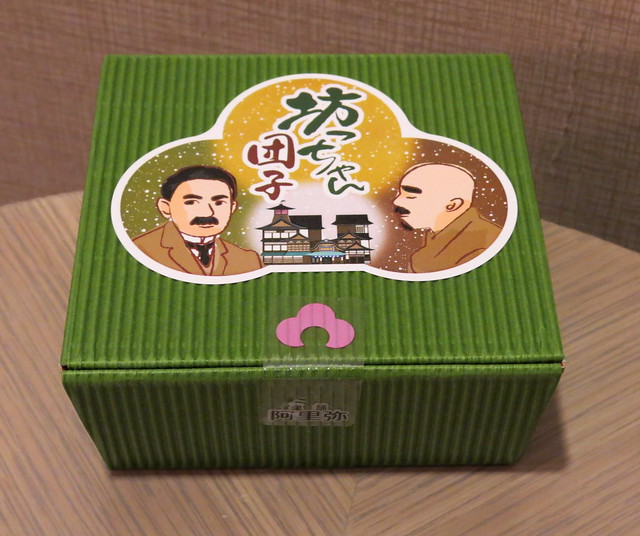 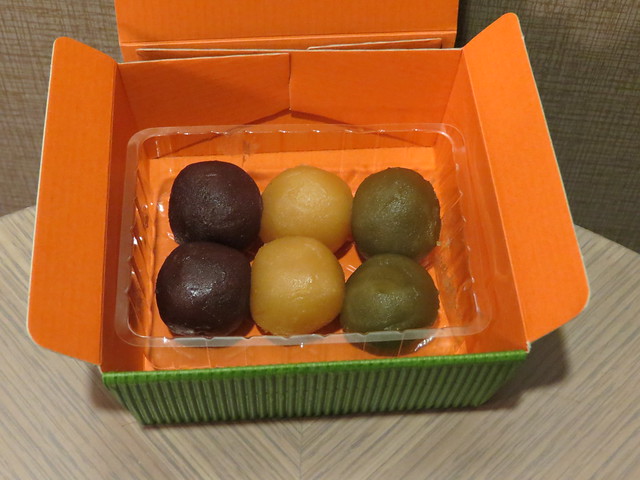 Another key Botchan-related item in Matsuyama is the Botchan Karakuri Clock. This robotic clock which stands near Dogo Onsen Station is modelled on the White Heron Watchtower of Dogo Onsen Honkan comes to life every hour on the hour with figurines and scenes from Soseki’s novel. 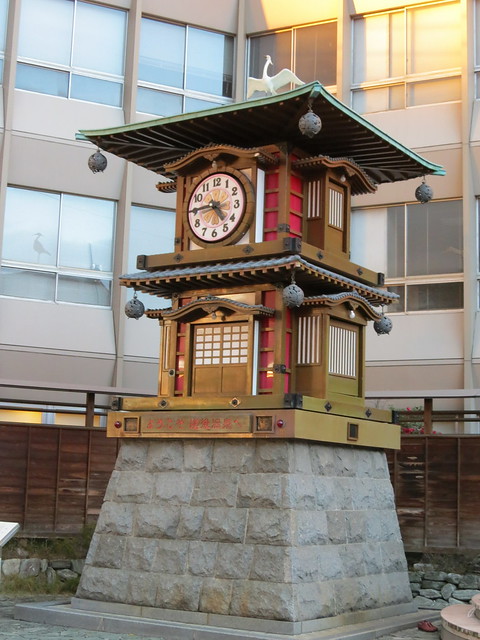 There is also a replica steam train which runs about town called the Botchan Train, which certainly looks quite strange next to all the cars and trams! 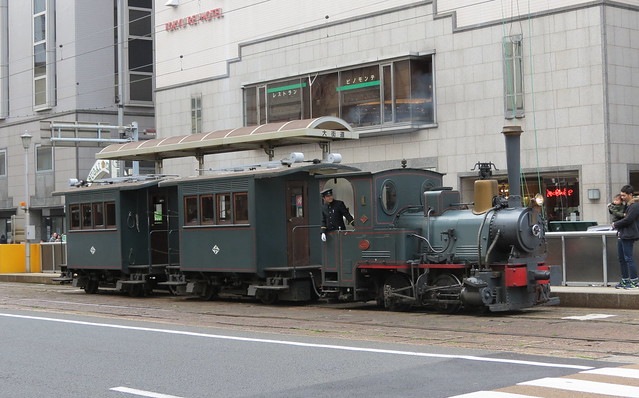 Matsuyama’s other main attraction is Matsuyama Castle (松山城). Matsuyama Castle is one of Japan’s 12 original castles, constructed between 1602 and 1628. The castle sits on a hill-top, but there is a handy ropeway and a terrifying chairlift to make it easily accessible. I opted for the ropeway! 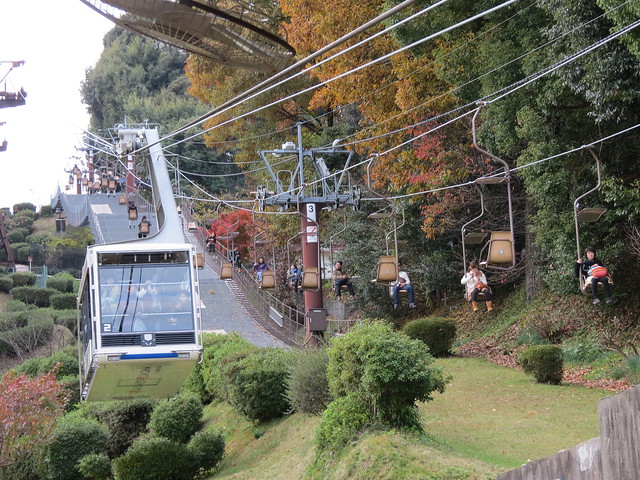 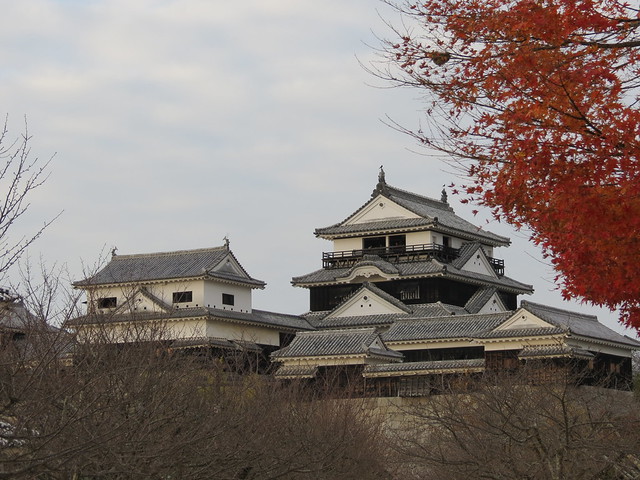 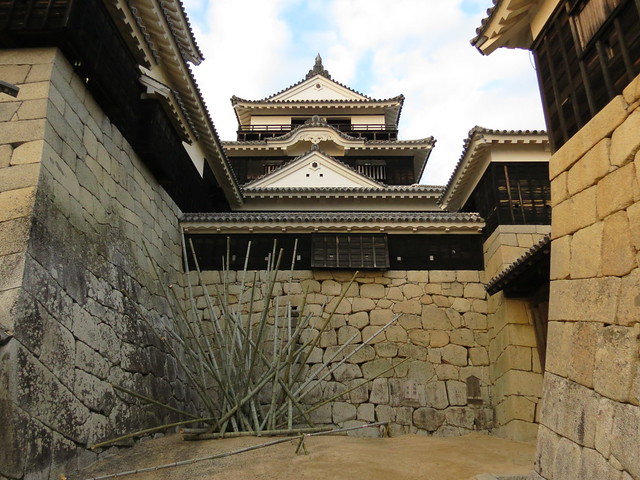 The castle was wooden inside, and as usual visitors shuffled about in badly fitting slippers and risked life and limb to climb the slippery wooden stairs in footwear likely to fall off at any moment. I opted for socks – still dangerous, but at least they weren’t going to fly off. 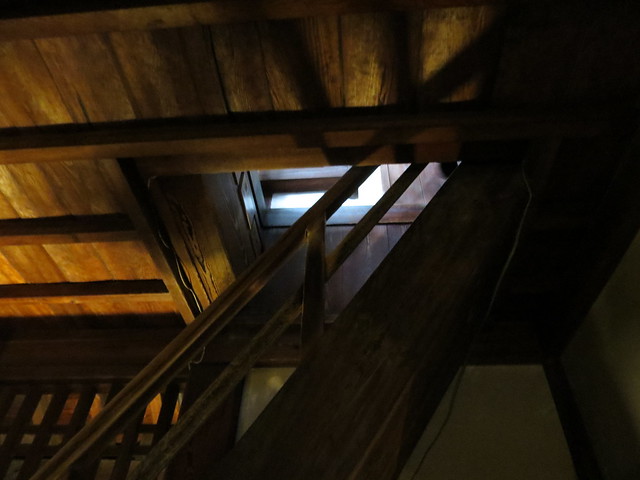 There happened to be an exhibition inside the castle of ikebana and kimonos, which was absolutely lovely! 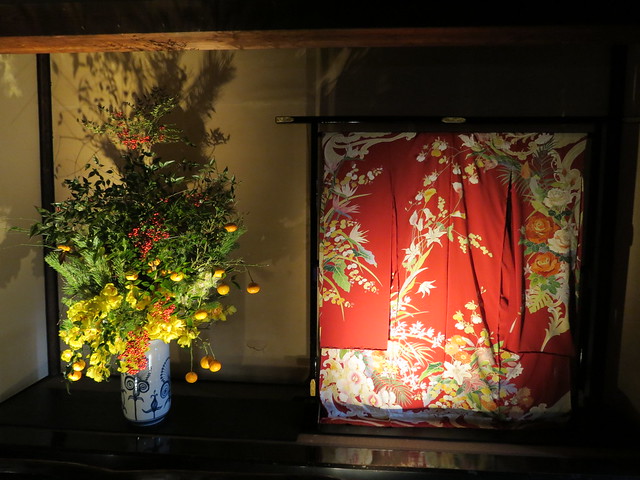 As is often the case with castle in Japan, one of the best bits was the view. 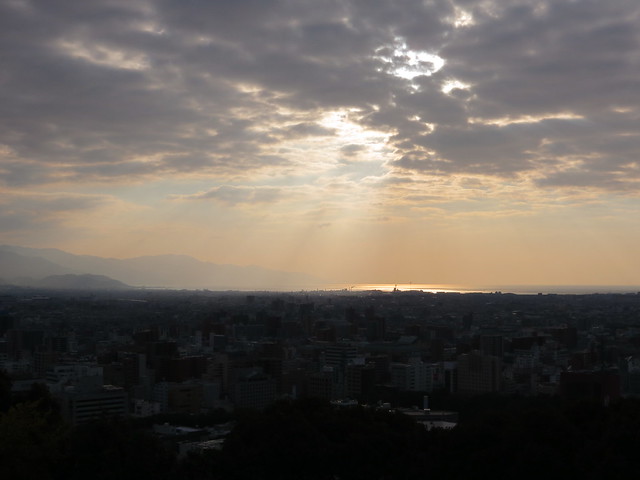 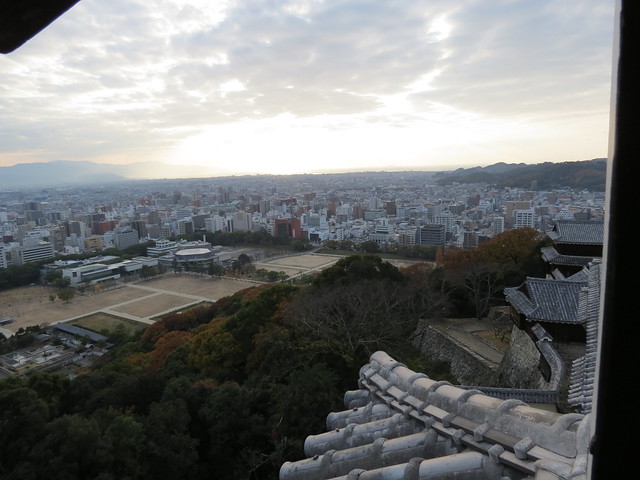 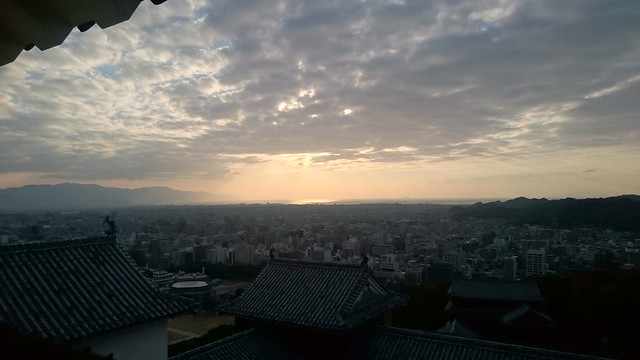 As I left the castle I ran into a couple of samurai, as you do, as also the castle’s mascot in plastic form. I also ran into a TV crew desperate to interview a foreign visitor in English. They asked me things about the architecture of the castle, and all I could think to say was that it was interesting. It was. Matsuyama Castle is a nice castle. 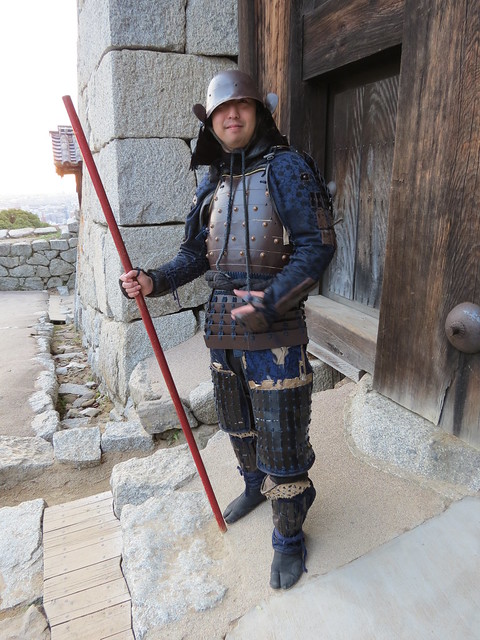 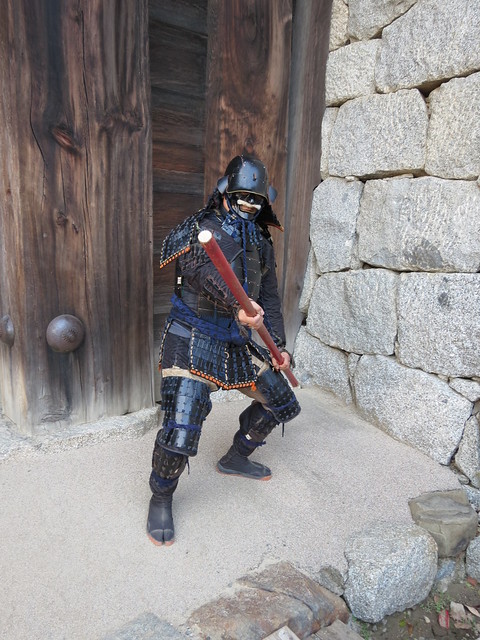 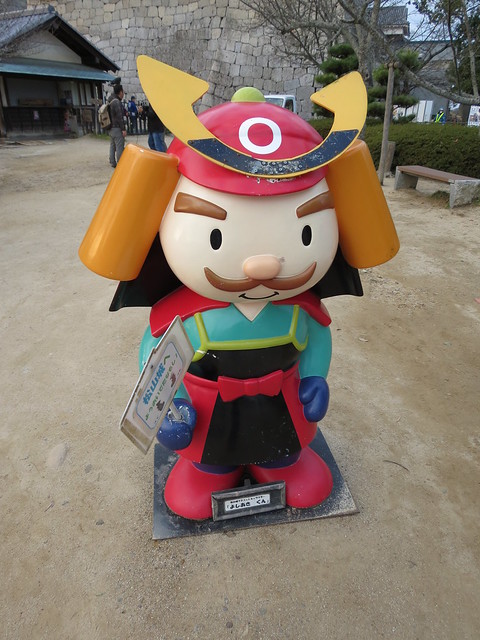 Overall impression of Matsuyama? I liked it a lot! Dogo Onsen had a lovely traditional atmosphere, the shops and arcades were fun to explore, and the castle is one of the best Japan has to offer (one of, mind you, there’ll be an even better one to come soon!). I would say any visit to Shikoku just wouldn’t be complete without a night or two in Matsuyama.

I’ll leave you with one more photo in this rather photo-heavy post. I just happened to snap this little kid running down an alleyway towards a brightly coloured door, and I felt like it could have been a ‘spirited away’ moment… 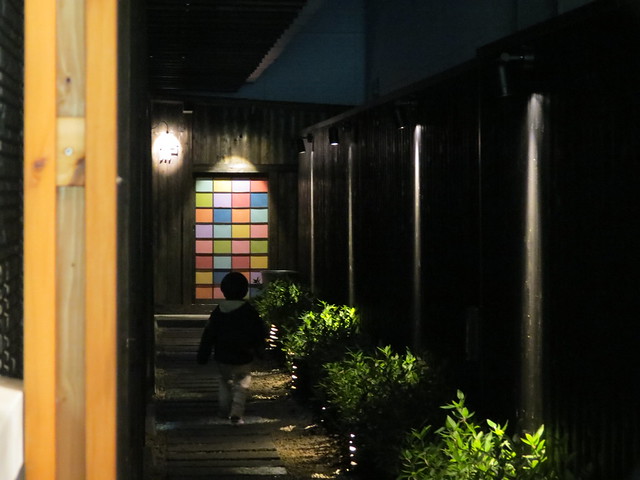 6 thoughts on “Japan 2015: Spirited Away in Matsuyama”