Finally, I’ve reached the very end of my 2015 Japan trip posts! It only took me six months… I thought I’d finish with a quick post about a theme which ran through my whole trip – Kit Kats! Back in 2014 I had the pleasure of visiting the first Kit Kat Chocolatory in Tokyo. Now there are eight stores across Japan, and I visited two more last year. 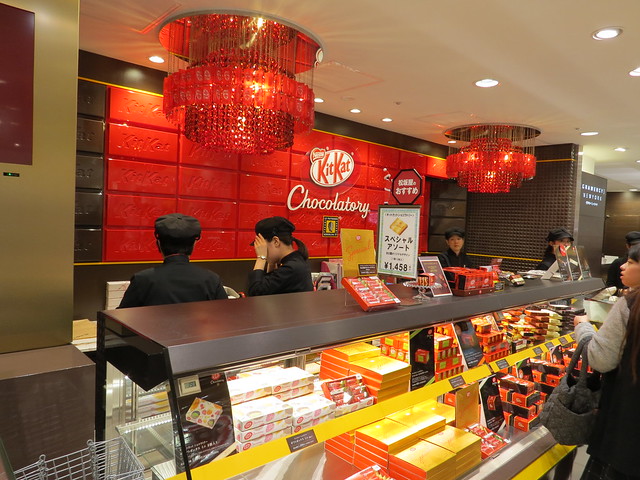 I really want one of those Kit Kat chandeliers! 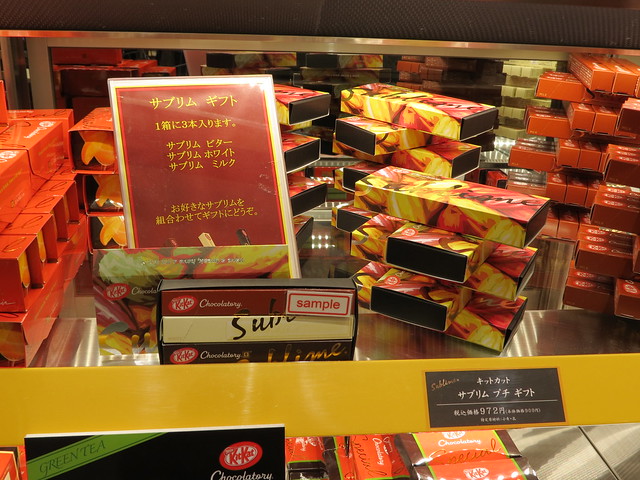 Every store has fancy displays of the Kit Kats available

In the store in Nagoya I got a ‘Sublime’ set. Sublime is a special range of Kit Kats only available at the Chocolatory stores. They are single finger, high quality chocolate bars, and they are really delicious!

I also discovered the chili and passion fruit and the orange cocktail noir flavours in the ‘Special’ range – yum! 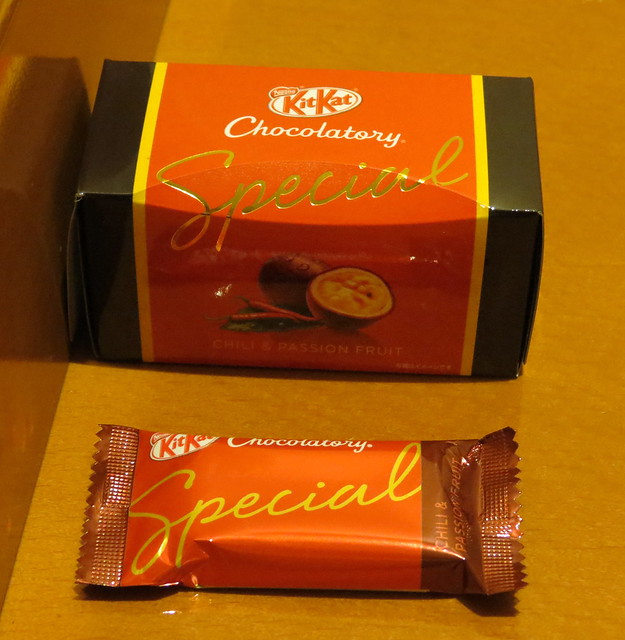 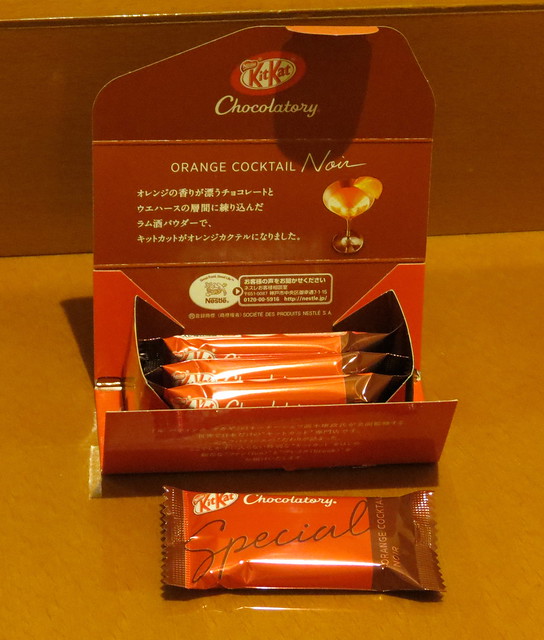 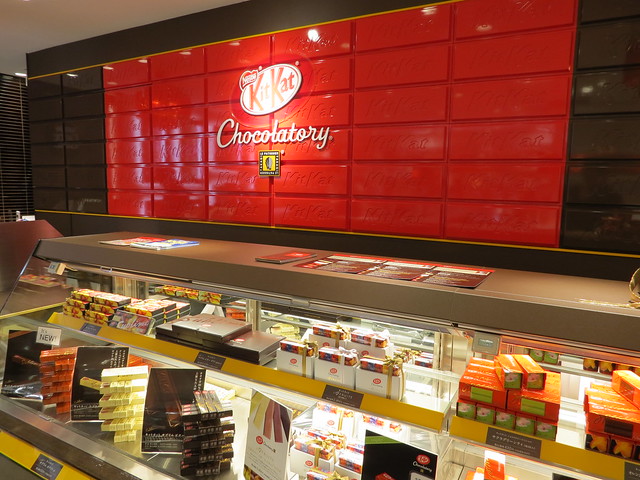 Each store looks pretty similar, and they are all concessions in department stores 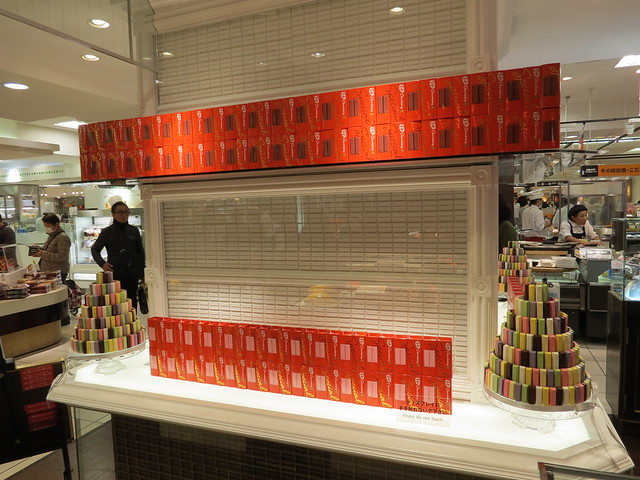 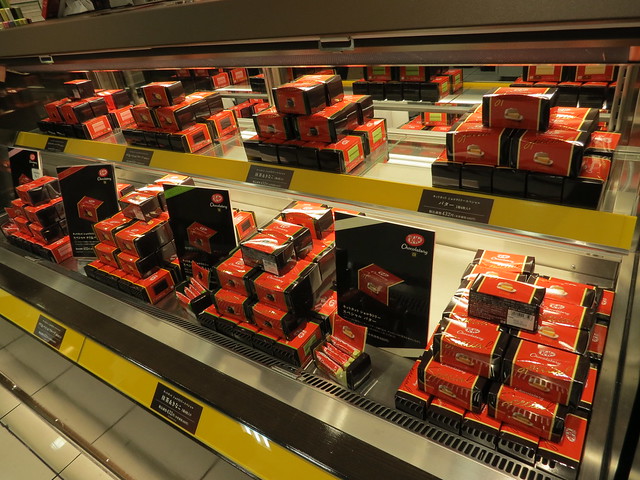 I wanted to buy every flavour…

In Kyoto I found some different Kit Kats – my favourites were the ‘I ♡ FRUITS’ range: 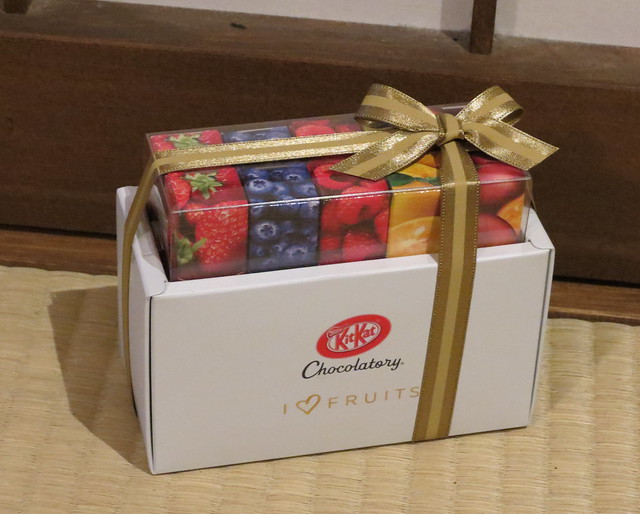 The Kit Kats came in yuzu, passion fruit, raspberry, blueberry and strawberry flavours, and they were really fruity!

I also bought some of the ‘Special’ gift boxes as gifts for Christmas. These include the flavours: butter, pistachio & raspberry, strawberry maple and green tea & kinako. The butter ones are too sweet for me, but the others are great – especially the pistachio & raspberry ones. 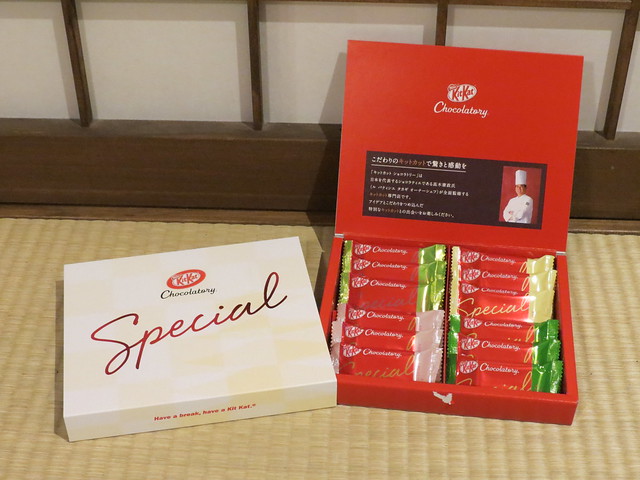 As I was staying in Ikebukuro I popped back to the Kit Kat Chocolatory Seibu Ikebukuro (西武池袋店) too: 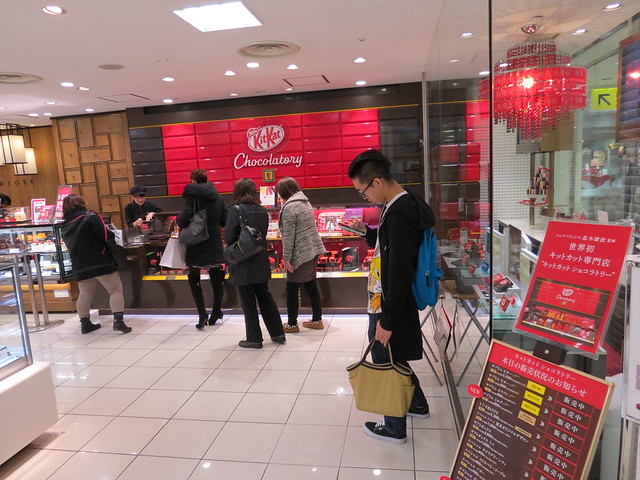 Kit Kats are crazy popular in Japan! There are regional and seasonal varieties, and now all the major souvenir shops in cities and airports stock the most popular flavours. It’s incredible to think that a humble English chocolate bar is now a massively popular Japanese souvenir simply because the name sounds like the phrase ‘kitto katsu’ which means ‘you will surely win’. Kit Kats were launched in the UK in 1935 as a simple treat (originally being called ‘Rowntree’s Chocolate Crisp for the first two years) and did not make their way to Japan until 1973. It wasn’t until about 14 years ago that Nestle realised people were buying Kit Kats to give as good luck gifts for students taking university entrance exams and jumped on the idea with a marketing collaboration with Japan Post. The first ‘postable Kit Kat’ was then launched in 2009. There have been over 300 different flavours of Kit Kat in Japan and more are being created all the time. Top patissier and chef Yasumasa Takagi of ‘Le Patissier Takagi’ is the mastermind behind the unique flavours being sold at the Chocolatory stores, and it is his creations which are taking Kit Kats from being a humble tea-time treat to being a luxury brand which consumers are willing to queue for. You can’t go anywhere in Japan these days without running into a Kit Kat! 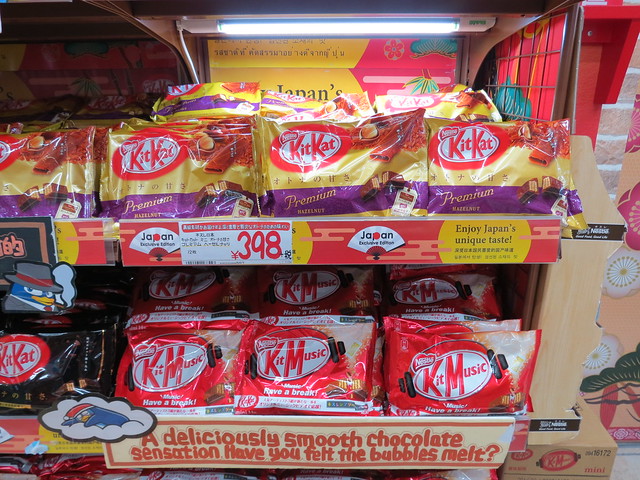 Kit Kats on sale in Don Quijote in Osaka 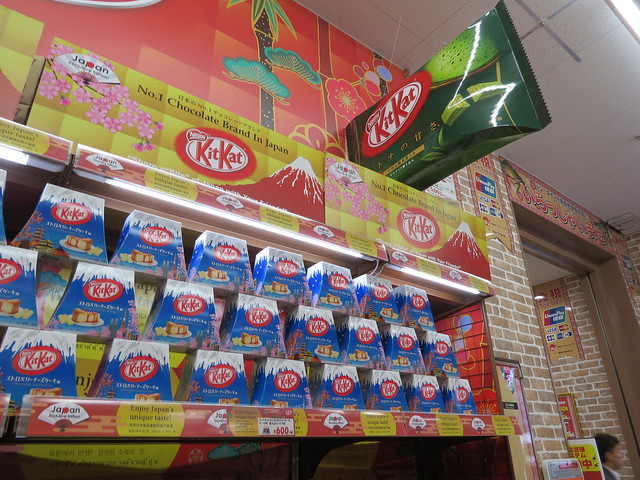 A Kit Kat here, a Kit Kat there… 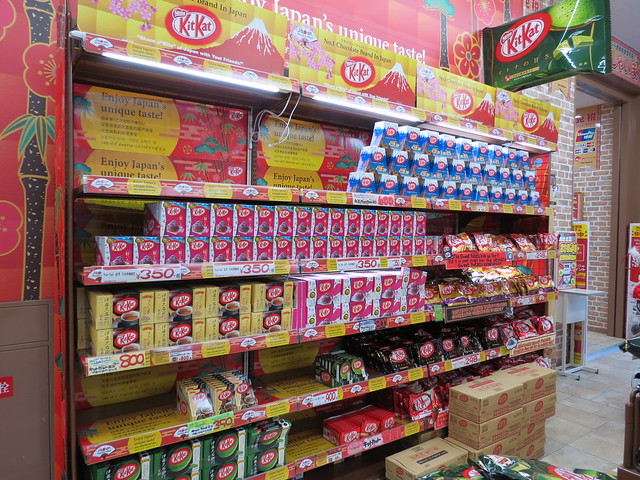 Of course, matcha green tea flavour Kit Kats are still one of the most popular souvenirs. These days the main matcha flavour that is available is in the ‘Adult Sweetness’ range. This bizarrely named range is supposed to appeal to the adult palate more than that of the child, apparently, due to being slightly more bitter. 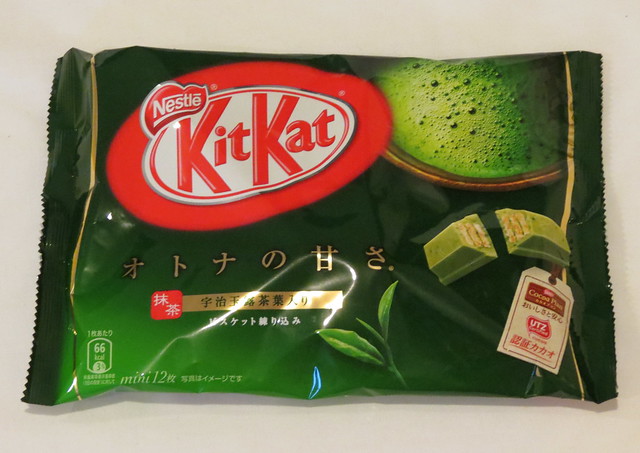 I also discovered these delicious hazelnut flavour Kit Kats which are in the ‘Adult Sweetness’ range: 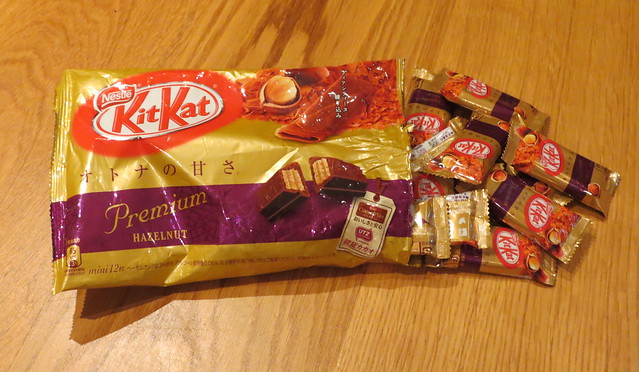 As I travelled around in Shikoku I found some regional flavours – these citrus fruit Kit Kats are really zingy! 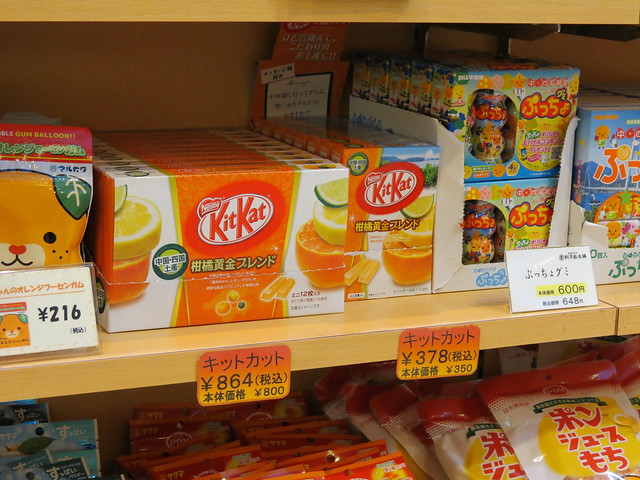 I found Kit Kats you could post, on sale ready for entrance exam season: 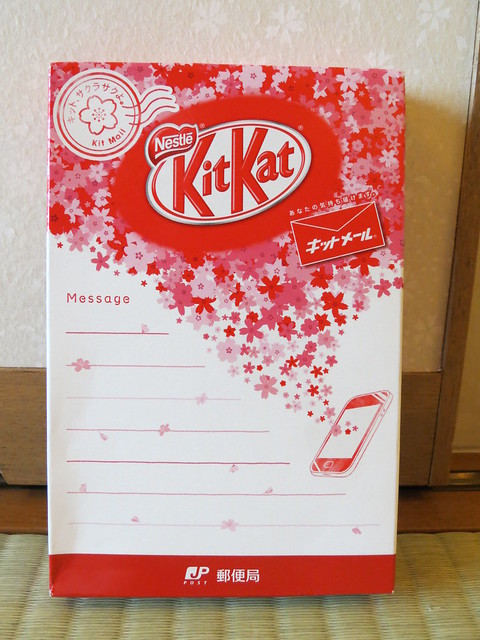 One of the seasonal varieties in December was Rum Raisin ‘Big Little’ Kit Kats – I love this range, and rum raisin is my favourite flavour! 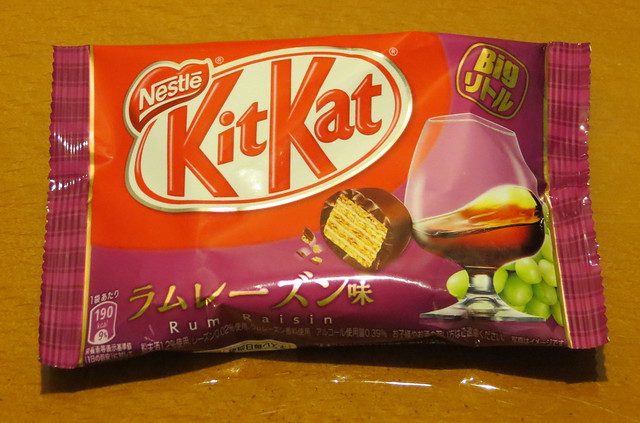 Special New Year Kit Kats were also on sale. These have an envelope attached for the ‘otoshidama’ – a monetary gift given to children for New Year. 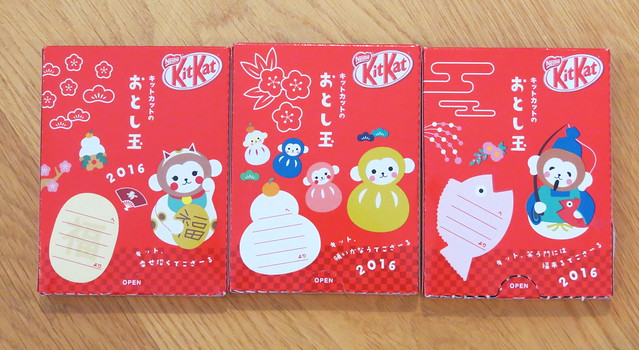 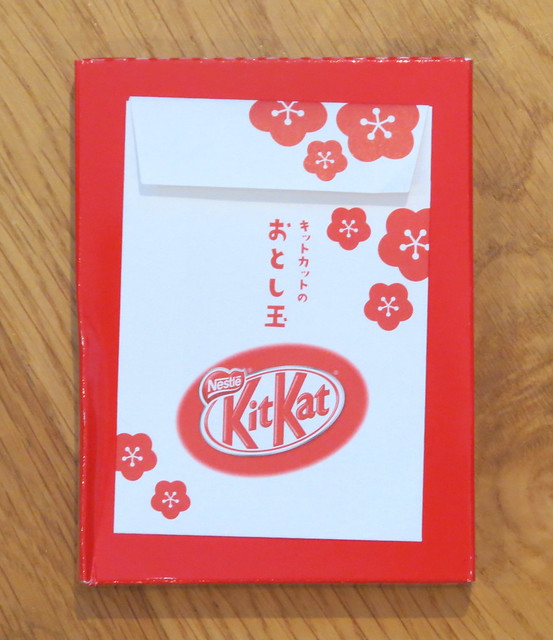 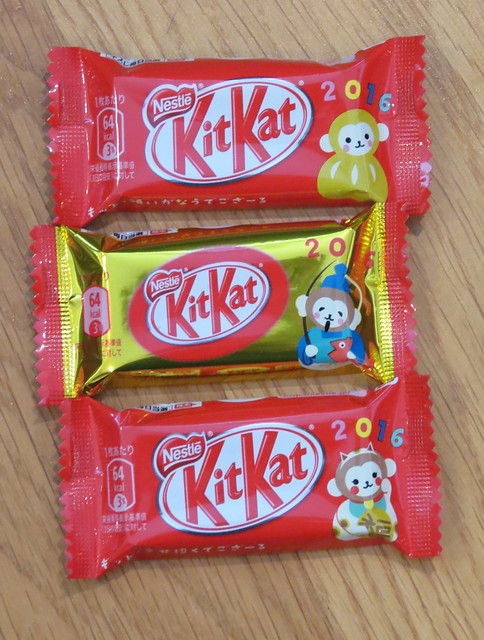 The year of the monkey!

Sometimes Kit Kats are even used in collaborations with other companies. I heard that the cafe chain Pronto (プロント) was serving Kit Kat croissants as a ‘Kit Kat For Cafe‘ promotion and managed to seek one out in Kyoto! It was pretty good, but the smoky cafe wasn’t somewhere I would want to return to! There is apparently a green tea Kit Kat croissant too, which I wish I could have tried! 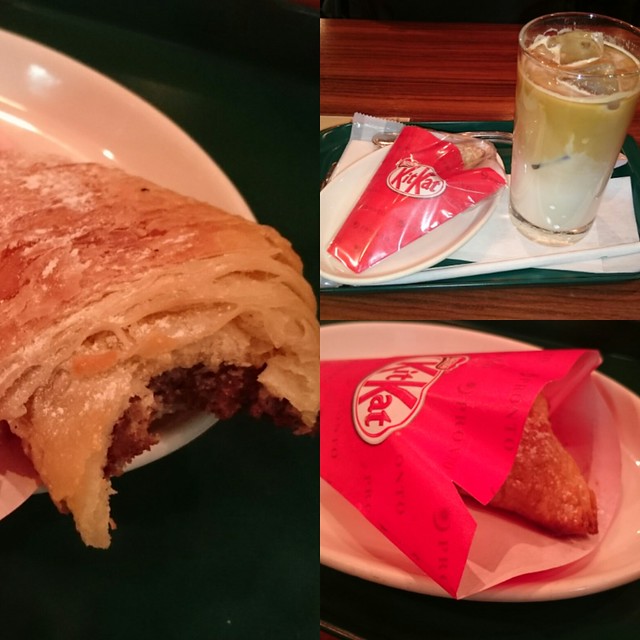 If you’re lucky enough to visit Japan I recommend trying some of the different Kit Kats you can find there and bringing some home as souvenirs. Kit Kats can be bought across the country at souvenir stores such as Don Quijote and at airports, some are available in convenience stores, and of course you could visit a Chocolatory. A list of the Chocolatory stores is here, but I’m afraid it’s in Japanese. Kit Kat is apparently now the ‘No. 1 chocolate brand in Japan’, and advertisers are urging tourists to ‘share a ‘bite’ of Japan’ with their friends. Have a break, have a bizarrely flavoured Kit Kat! 😉 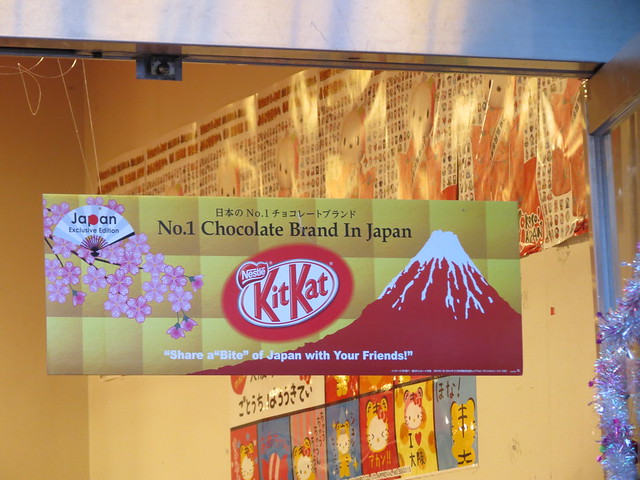 Kit Kat: No. 1 Chocolate Brand in Japan! Share a ‘bite’ of Japan with your friends!

Don’t forget, if you like all things Kit Kat you can see more over on my other blog, Kit Kats!