“If you must blink, do it now…” What an opening line! I was captivated from the moment the film started, and Kubo & The Two Strings is without a doubt the best animated film I’ve seen this year, and in a long time. 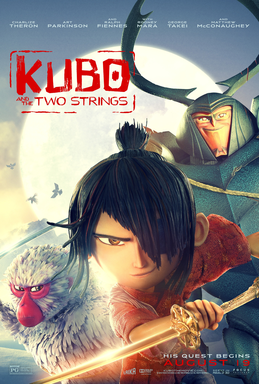 Kubo & The Two Strings is not a Japanese film, it’s an American film with a Japanese heart. The film uses 3D stop-motion animation, and the unique style is something I really fell in love with. I was worried that an American film voiced by such big names as Charlize Theron, Matthew McConaughey and Ralph Fiennes might not have the independent cinema feeling that a film like this needs, but I needn’t have worried. The famous voices weren’t at all distracting, because the animated characters were so watchable and full of their own unique charms. In fact, I was so lost in the story that I didn’t even think about it being an animated film most of the time.

The story told in Kubo is, as far as I know, a new story and not based on any ancient Japanese legend, although it feels like it could be. Kubo is the main character; a young boy living with his ill mother in a mountain-top cave. Each day he goes to the nearby village to tell stories, which he illustrates with magically moving origami characters. The magic comes when he plays his shamisen (三味線), a three-stringed Japanese instrument. Kubo’s mother warns him to be home before sunset each day, but one day he gets distracted by the Obon (お盆) festival where people are communicating with their deceased loved ones, and tried to speak to his dead father. As soon as the sun sets, his mother’s evil witch-like sisters come and wreak havoc, attempting to take Kubo’s one remaining eye and destroying the village in the process. Kubo’s mother tells him he must find his father’s magic armour, and that is when his quest begins. Accompanied by a cheeky monkey and a bumbling beetle, Kubo travels across the land, fighting some pretty scary monsters along the way, trying to find the armour and put everything right. I won’t go into all the details of the story here and spoil it, but boy is it good! Here’s the trailer:

I adored this film, and the two things that captured my heart the most were the animation and the music. Looking first at the animation, Director and lead animator for Laika Entertainment Travis Knight describes Kubo as “a stop motion samurai film”. I couldn’t even comprehend some of the animation or imagine how it had been created, but at the end of the film in the credits there was a fantastic little clip showing some of the animators at work. The clip below is a great insight into how the film was made and how the animators captured this very individual Japanese style and made such a beautiful film. Everything in the movie looks like it is made out of washi (Japanese paper) or wood, and some of the effects are absolutely mind-blowing.

And the music – what wonderful music! I found out not long before seeing the film that the wonderful Hibiki Ichikawa had been one of the featured shamisen players on the soundtrack along with Kevin Kmetz. The shamisen was as much a character as Kubo himself, and such an important part of the film. I hope that featuring this traditional Japanese instrument in an American film will introduce the wonderful world of shamisen to a larger audience.

The film’s credits were well worth watching, not just for their beauty and creativity, but also for this fantastic version of ‘While My Guitar Gently Weeps’ by Regina Spektor which includes some shamisen playing. The whole soundtrack is wonderful (yes, I bought is straight after seeing the film), and this theme tune is just the icing on the cake.

Kubo & The Two Strings has everything: amazing animation, a captivating story, interesting characters and fantastic music. And, to top it all off, it’s set in an ancient and magical Japan that feels real and makes you want to pack up your bags and go travelling. There is already a gorgeous book out of the artwork from the film (which is on my wishlist!) and the DVD is available for pre-order, due to be released in January. Watch this film now whilst it’s still at the cinema – you won’t regret it!