“Ichigo ichie” (一期一会): a Japanese idiom meaning “one time, one meeting”. The phrase embodies the cultural concept of treasuring meetings with people, and is often translated as “one chance in a lifetime”, reminding people to cherish any meeting or experience they are part of, as they may not be repeated. The phrase “ichigo ichie” has been adopted by a new series of videos which has launched on Great Big Story and CNN International in partnership with All Nippon Airways (ANA), Japan’s largest and only 5-star airline. The series comprises seven videos which look at unique parts of Japanese culture, and the video I would like to share with you today is: ‘Sumo Soup: Living Large with Chanko Nabe’.

This video is all about ‘chanko nabe’ (ちゃんこ鍋), the stew that sumo wrestlers in Japan eat daily to bulk up (they will typically eat 10 bowls of chanko with rice a day!). The video features ex-sumo wrestler Satoshi Kitayama who runs a restaurant in Tokyo called Sumo Wrestler Cuisine Kotogaume (力士料理 琴ヶ梅). His restaurant serves mainly chanko nabe; a well-balanced stew containing both meat and vegetables. Chanko nabe does not have to be made to a fixed recipe, and the chef can use whatever they want or whatever they have. Typical ingredients include chicken, fish or tofu, and vegetables such as daikon (raddish) and pak choi (Chinese cabbage). Kitayama opened the restaurant because he wanted people to know how delicious chanko is and because he wanted to share the different flavours he had tasted whilst travelling around as a sumo wrestler.

1. Prepare the chicken meatballs
・Cut the spring onion
・Mix all ingredients together until the mixture becomes sticky

2. Prepare the rest of stew
・Cut the chicken thighs and 1 piece of tofu into bite-sized chunks
・Cut the Chinese cabbage (removing the leaves as these take less time to cook)
・Cut 1 bunch of spring onion into 4cm pieces (diagonally)
・Remove the stalks of the shiitake mushrooms
・Boil the 2 pieces of fried tofu for a few seconds to remove oil and then cut into 8 pieces
・Cut 1 medium carrot into 3mm slices (diagonally)

3. Add the diced chicken thighs, 1L of water, 80ml of cooking sake, pinch of salt and 80ml of soy sauce into a pot.
・Bring to boil.
・Then drop in the mixed minced chicken using spoon to make the meat balls

I don’t eat meat, so I decided to have a go at a veggie adaptation of the recipe. I used some ready-made Quorn ‘meatballs’ for mine, but you could just as easily add more veg if you’re not keen on meat substitutes.

Using the method above, I chopped and prepared all of my ingredients.

Then I basically put everything in the pot to cook.

After letting everything simmer for 10-15 minutes I had a delicious, hearty stew! I only ate one bowl though, and not with rice – I don’t want to bulk up like a sumo wrestler!

I went to see the sumo once when I was in Japan (in 2008), and it was the kind of experience you can never forget! I’m not that into sports and didn’t entirely know what was going on, but I really got into watching them fight. It’s an incredible sport, and the wrestlers train so hard for what they do. 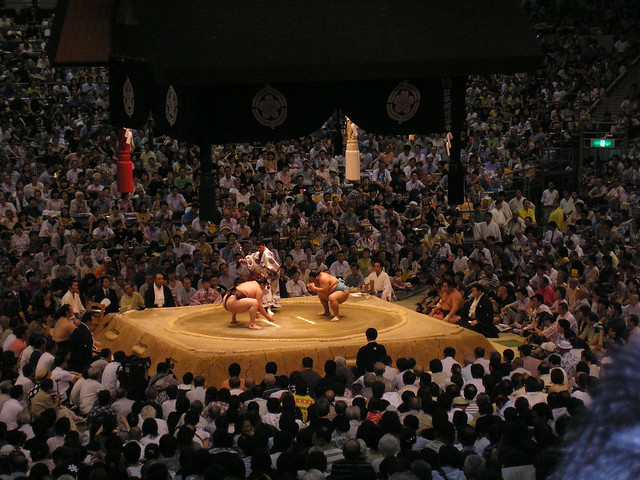 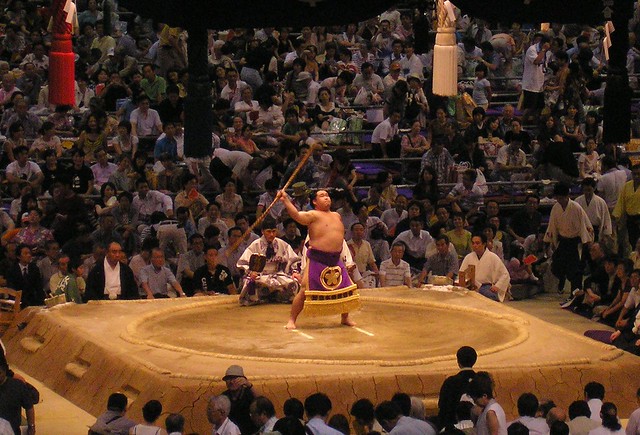 If you’re interested in seeing sumo in Japan you can find out more here. There are 6 tournaments a year, in January (Tokyo), March (Osaka), May (Tokyo), July (Nagoya), September (Tokyo) and November (Fukuoka).

ANA focus on Japanese hospitality. With ANA, the idea is that your Japanese trip starts on board so you can experience Japanese hospitality before you even set foot in the country. They aim to give all passengers a travel experience far beyond their expectations. From check-in to boarding and everything in between, ANA’s airport services have been recognised as the best in the world. So customers are able to enjoy delicious Japanese meals on all ANA flights, they train local chefs in the techniques of Japanese cuisine. In-flight meals are planned and developed one year in advance and these meals taste as good as they look. Passengers can enjoy a wide range of gourmet meals and have an exquisite dining experience while they soar above the clouds.

Watch this space for more videos from the Ichigo Ichie series coming soon!